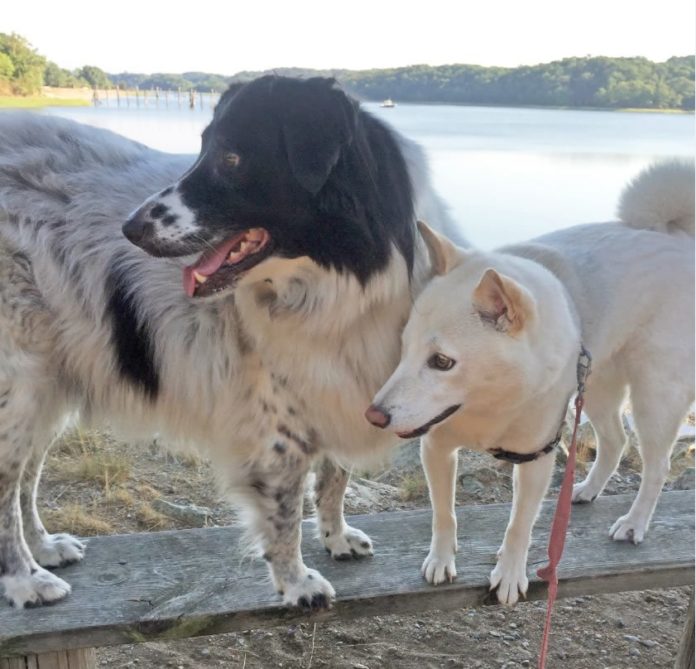 The night that a blizzard dropped a foot of snow in my area this past winter, little Rosie was having trouble making her way over a snow bank that separated the road from a park. Usually she’s pretty tough, but that night she was spooked and, although I had her on leash, she kept backing up further and further into the road. I had already let Franklin off leash, and he easily made his way over the bank and was walking further into the park.

Panicked that a car would come while Rosie resolutely resisted in the roadway, I started to trudge back over the bank to pick her up and carry her to the other side. Franklin sensed me going the wrong way and immediately came running. When he saw what was happening, he went straight into the road without hesitation and positioned himself right behind Rosie so she couldn’t back up any further while I navigated. (As if you needed to ask why I love him so much.)

As for Rosie, she couldn’t protect Franklin if her very own life depended on it. It’s not because she’s smaller than he is. It’s because she’s kind of in a fog — and to be honest, more self-serving than Franklin. She’ll think nothing of walking over to his bowl once in a while and daintily picking away at his food. But if he so much as dares to go near her bowl, she’s there in a flash to stare him down.

I used to try to broker these interactions between them. But you know what? If I would yell at Rosie, it would only upset Franklin more. And truth be told, as caring and aware as he is, he has his selfish moments, too. If Rosie’s sniffing something particularly good on one of our walks, for instance, he’ll sometimes literally push her out of the way to have a better go at the scent for himself. And because she eats more slowly than he does, he’ll sometimes scarf down a treat we give her after he greedily devours his own without considering that it takes her longer to get to it.

I hadn’t wanted to let all these transgressions go. I thought they each had to learn better manners. But they do so much hanging out and playing together, I came to realize over time that they’re okay with each other. They have their own way of working things out.

Tufts Animal Behavior Clinic Head Stephanie Borns-Weil, DVM, says I’m right to let them resolve their issues on their own. For the most part, she says, dogs have specifically canine methods of dealing with “sibling” rivalry, and our inserting ourselves into the situation can actually interfere with their ability to get along. For more on fostering a good relationship between your dog “children,” see the article beginning on page 13. n