Home DOG OWNERSHIP The Five Questions to Ask When Choosing a Puppy from a...
Print
Email
Facebook
Twitter 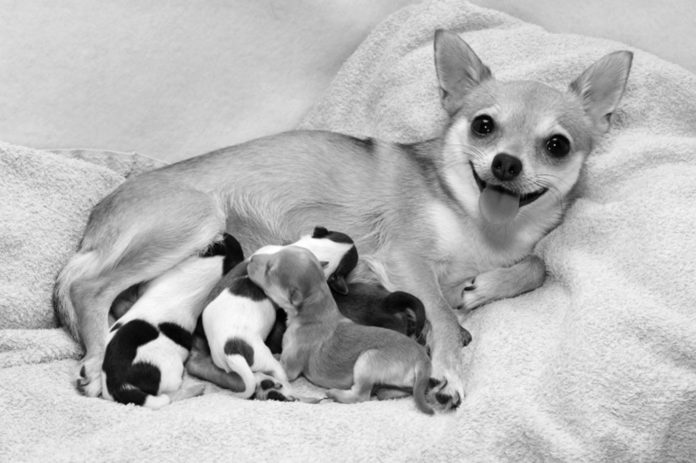 We wholeheartedly endorse choosing a dog from a shelter or pound. There are wonderful dogs out there just waiting to become pets who would provide years of joy to anyone seeking canine companionship in return for a loving home. But as much as saving a dog in need brings with it wonderful rewards, there are also advantages to choosing a newly born puppy, whether from someone who raises purebred dogs professionally or from someone who simply has a bitch who became pregnant. You get to help mold the dog’s personality pretty much from the start and work with her inborn temperament to bring out the best in her while she’s absorbing life’s lessons like a sponge, as puppies do.

You also get to learn something about the temperament of her parents, or at least her mother, which will be much more predictive of the kind of dog she will grow up to be than just knowing about her breed in general. After all, within any one group, there are outliers who don’t fit the stereotypical description.

Then, too, you can make sure that during the puppy’s critical early weeks before she comes to live with you, she is raised with lots of tenderness and compassion that will allow her to mature to adulthood as her best self — if you ask the right questions. They’re worth asking, whether you’re responding to an ad in the local paper for newborn mutts or have identified a breeder on the Internet who raises the breed of dog you’re looking for. After all, you’re about to make a commitment that’s going to last, hopefully, somewhere between 10 and 20 years.

1. How many bitches do you own? Someone with two to three bitches who own, altogether, two to four litters a year is going to be able to afford each new puppy the attention and care she needs. Someone with eight to 10 bitches who handles a half dozen to a dozen litters annually is starting to sound more like the owner of a puppy mill than a dog lover.

2. Where does the whelping take place? “Whelping” is breeder talk for “birthing,” and if it takes place in the owner’s garage or barn or “down in the cellar,” something’s wrong. Dogs meant to become pets are supposed to be born right into a human family in order to acclimate them from the beginning to living with a species other than their own. Therefore, a good answer to this question would be, “we have a whelping area right off the kitchen” or “we let her choose her location in the house.”

3. What can you tell us about the puppy’s mother and, if possible, her father? Is either very anxious? Aggressive? Aloof? Clingy? Stack up the answers against what you want out of a dog. Some people love “clingy.” They want nothing more than to sit on the couch with their dog right next to them so they can snuggle together. Others want more independent dogs who would enjoy hikes in the woods and don’t particularly want the dog to shadow their every footstep.

When listening to the answer to this question, listen, too, to see if the answer is incomplete, or hesitant in any way. The person talking should be very open and willing to volunteer information. If not, that’s a red flag. Maybe the dog’s parents were both strong-willed and needed owners who set firm rules, and you’re more of a cream puff and want a pet who’s more ready to oblige. A breeder shouldn’t hide information about a dog’s dam and sire because he thinks the temperament likely to develop in the puppy will not work with what you’re looking for in a dog.

4. Does the puppy have the opportunity to see people often? If people are always coming and going and paying some attention to the puppy as they do so, she will have an easier time understanding what it is to socialize. It’s best if the puppy gets to interact with both women and men — and children and cats, if possible. Anything that adjusts her to her world while she is still very young bodes well for her life in your home.

5. Is the puppy a singleton, or does she have littermates? It’s not just the mother who teaches a puppy how to behave. So do her brothers and sisters, correcting and cajoling her and thereby teaching her such life lessons as how not to bite too hard and when to give in.

Along with asking these five questions, you want to get a sense that the breeder is interviewing you as well as being interviewed. Perhaps he’ll want to know how often you plan to walk the dog or whether the dog will be left alone all day while you go to work and, if so, how you plan to keep her occupied in your absence. Don’t be put off. Such questions mean you’re buying a puppy from someone who really cares about dogs’ welfare — a good clue that the dog is being treated right in the breeder’s home.

Once you get a good feeling over the phone or via an exchange of e-mails, it’s time to go visit the place. You want to be sure that what has been represented to you is in fact the truth.

The first thing you’ll want to check for is that it’s a clean operation. Pups living in dirt or outright squalor definitely constitute a very bad sign. You can also check in person on how the dog is being treated. If, for instance, teenagers are allowed to come right up to the puppy’s face and tease or taunt her, she is being disrespected and learning to feel frightened. You don’t want to raise a dog like that, nor do you want to reward a breeder for such insensitivity.

On the flip side, you can check to see that the dog really is loved by her breeder and cared about, that she has a nice set-up with perhaps some toys or a warm blanket and that the new puppies seem happy and inquisitive rather than scared. If all that checks out, you’ll be in a much more knowledgeable position when it comes to choosing to take the dog home.