Home DOG TRAINING AND BEHAVIOR Body Language: Is It a Behavioral Quirk Or Something More Serious?
Print
Email
Facebook
Twitter 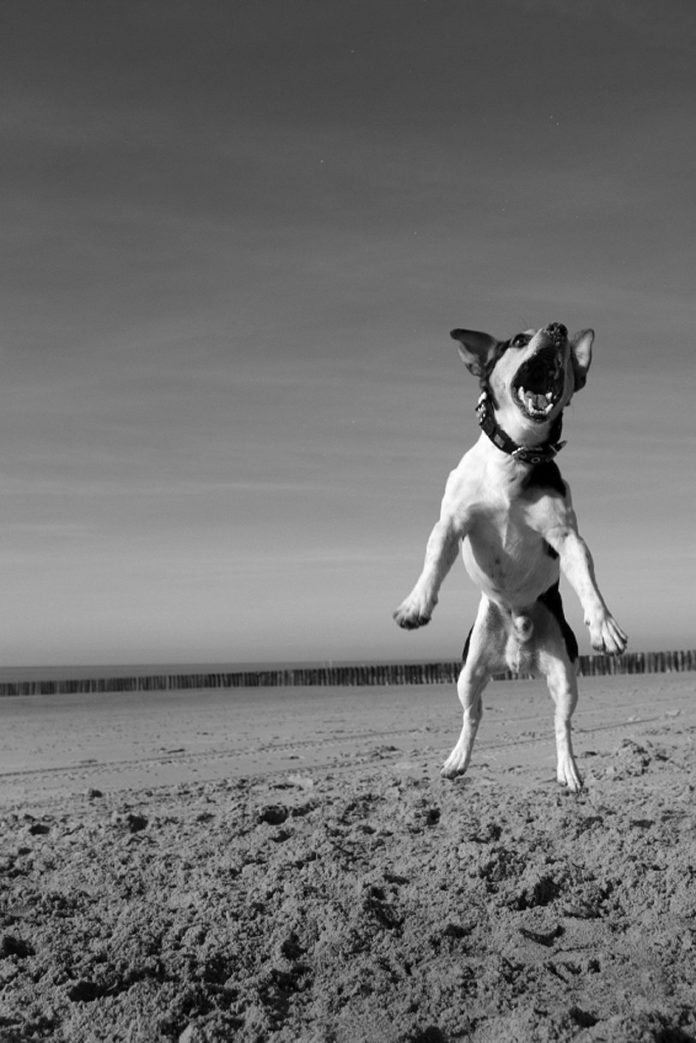 You’re done playing fetch but with a toss of her head and a pointed snap into the air, your dog informs you that you will continue. It’s a bit of bossiness that makes you laugh. Teeth clicking is another sign that play has become awfully boisterous, or even aggressive, and that a dog might have gotten carried away with her excitement.

Sometimes the canine behavior is easy enough to decipher, sometimes not. And some displays may leave you worried about possible aggressive tendencies, neuroticism, or even a neurological or medical condition. To cut down on the confusion, here are some examples to help you decipher what might be confusing behavior and to know when an unusual behavioral development might warrant a visit with your dog’s veterinarian.

Leg stretched out: Perhaps you’ve noticed your dog raising her paw while she considers the unique smells of shrubs and other greenery outdoors. Maybe she even tucks her paw up while approaching her food. Those mannerisms are benign. But what do you make of a dog who runs, walks, and even eats with one leg stretched out and behind?

If it’s a small dog, you may want to have your vet check to see if she has a luxating patella, meaning her knee cap is prone to popping out of joint. It tends to be a small-dog issue. By holding her leg in a stretched position, your little one is attempting to help the knee slip back into place. Your veterinarian can show you how to reposition the knee cap for your dog and, if needed due to the frequency of the problem, can also offer surgery to deepen the groove in the joint so that the kneecap can stay where it’s supposed to.

Muzzle punch: Sometimes, a dog’s breed can offer clues to her behavior. A border collie’s herding tendencies, for instance, might explain her “muzzle punches.” Let’s say the snow is piled too high for her to manage her way through it, so you head into the yard and shovel a path for her. In turn, she follows behind, “muzzle punching” the back of your knees by poking her face into them in a way that seems one part affection and one part a directive to “move it along.”

“Muzzle punches” may not be the best way to describe this behavior, which rarely involves a strong thrust of the dog’s face or anything else that seems like an actual punch. But some dogs have been known to get a bit slap-happy, jumping and butting their muzzle into another dog’s side, even with teeth showing, in what appears to be a friendly challenge to reciprocate with equally rollicking play.

Teeth chattering: Different from teeth clicking, teeth chattering gives the appearance that your dog is shivering not from head to toe but only in the teeth. The mouth is closed, and it would seem as though a woodpecker is hard at work within. Often, like clicking, it means that your dog is simply overwhelmed with excitement — a car ride, a mating signal, or the sight of you preparing to give her one of her favorite goodies.

But teeth chattering can sometimes indicate physical discomfort, too. For instance, if your short-haired breed has been doing it, it may be that her thin coat is not providing her with what she needs to keep her temperature regulated. More concerning is when this behavior is accompanied by body shaking in breeds such as the Maltese, bichon frise, and cocker spaniel. It could mean they have developed a neurological condition called multisystem neuronal degeneration, which may require anti-seizure medication. Teeth chattering also sometimes indicates a seizure disorder that remains undiagnosed because the dog remains conscious. With the potential for such significant risks, it is well worth your time to run your dog’s teeth chatters past your veterinarian. Chances are it’s nothing, but better safe than sorry.

Teeth clicking: In addition to occurring with excitement, teeth clicking can take a more deliberate form in which a dog repeatedly clicks her pearly whites in a way that seems to say, “Back off or you’ll get some of these.” Like the dog who backs up and makes repetitive snaps at her playmate, this behavior is often a playful threat rather than a serious one. But if your pet follows it up with more aggressive behavior or if it occurs without clear context, you may want to consult your vet.

Air snapping: A bite into the air that is reminiscent of a silent bark is an attempt to get attention. It’s not truly intended as a threat (unless coupled with other aggressive or overtly dominant behavior). The only time you probably really need to mention air snapping to your veterinarian is if it occurs without context, such as at rest and involving the biting of non-existent flying bugs. This quirky behavior is sometimes called fly biting and can be the result of something as innocuous as boredom but could also potentially signal an ear infection, a bit of obsessive compulsive disorder, or a neurological condition. Your dog’s veterinarian and, if need be, a veterinary neurologist, will be able to determine the cause and whether a remedy is needed.

For the most part, you know your dog’s personality well enough to read her intent in her eyes as well as her body language and ascertain any proclivity toward aggressiveness, fearfulness, or other worrisome behavior. But if a new behavior is added to your dog’s repertoire and leaves you concerned or confused, follow your inner voice and set up an appointment with your dog’s doctor.