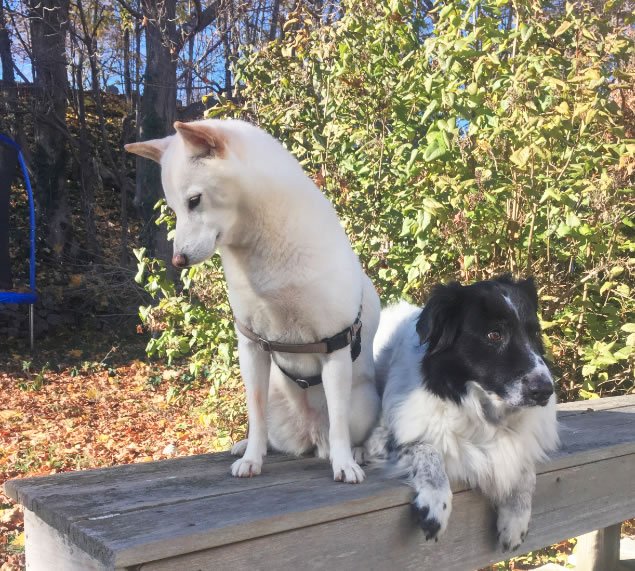 We have often said in these pages that dogs are very social animals, to the point that they will copy each other’s behaviors just to copy them. To wit: Franklin never used to shake his whole body out (unless he was wet from rain or snow and I had just put on clean clothes and didn’t want to get spattered with water). But then Rosie came to us with the habit. She kind of uses the shake-out as a transition from one activity to another — going from inside the house out to the driveway; going from the woods back to the car; and so on. And now, Franklin shakes, too. He doesn’t know why he’s doing it. Best I can figure is that he thinks, “She’s shaking — I should also.”

Rosie has also picked up a move from Franklin — humping. Franklin doesn’t do it often. He is, after all, a major coward despite all his bluff. But once in a while he comes across a dog who’s “ripe for the picking,” shall we say, and goes at it.

Like brother, like sister. Rosie does it, too, although she didn’t arrive at our house a humper. Over the last couple of years, however, I’ve watched her follow in her “big brother’s” footsteps once in a while, sometimes mounting very large dogs with all 28 pounds of her bravado and nonchalance. It’s quite a sight to see our skinny tube sock, as I call her, having her way with hulking Labs and retrievers and other willing dogs. They kind of look back at her with a bit of a Winnie the Pooh “Oh bother” expression but let her do what she wants.

I should note that Franklin is neutered and Rosie is spayed. This is not sexual behavior. What is it, then? And should I be more concerned about it? Should the owner of a dog who gets humped be concerned? To find out, click here.