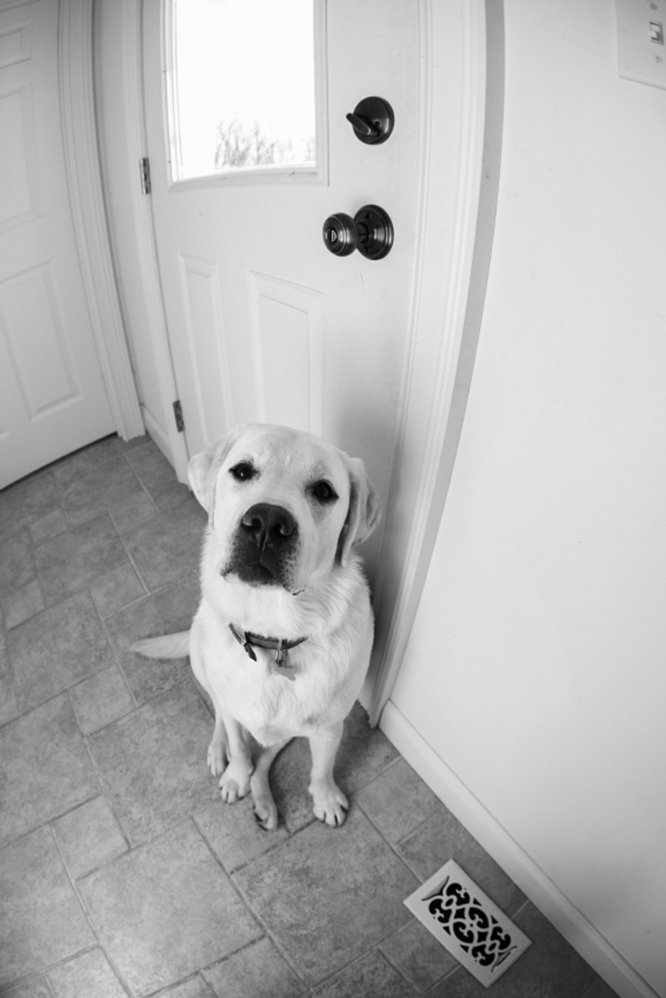 She refuses to go out willingly

Q I have a beautiful, 8-year-old blue Merle Shetland sheepdog. All of a sudden, she is refusing to go out. She allows me to put the leash on her and she’ll go with me to the door, but then she pulls back and won’t walk. The last time she walked out willingly was five months ago. Nothing stressful happened outside — suddenly, this change. I trained her as a pup to go on wee wee pads, so she never went outside. When we walked, it was just for exercise, but that was years ago. Can you explain this?

ATufts animal behaviorist Stephanie Borns-Weil, DVM, can not only sympathize but also empathize; she has been there with her own dog, Lucky. The good news is that she got him past his fear of going outside and believes you can do that with your own dog, too.

“First,” as much as the problem seems behavioral, “I’d rule out medical causes,” she says. “When you see a dog who’s borderline geriatric with sudden behavior changes and no major life events” that you can put your finger on, you want to make sure there’s not a physical problem going on. For instance, Dr. Borns-Weil posits, “I’d rule out thyroid disease, which is pretty common in shelties. Even borderline hypothyroidism — something you’ll see in later middle age in dogs — has brought about behavior changes. Tickborne disease” is another “obvious one,” she says. “It might be gradual enough that an owner wouldn’t necessarily notice creeping symptoms.” It could be arthritis, too, or something else causing pain or discomfort “that the dog is blaming on the outside because it hurts when she goes for walks.” Even “changes in hearing or eyesight can make a dog not so comfortable where she used to be comfortable,” Dr. Borns-Weil points out.

If a full work-up on a physical exam does not uncover any medical issues, it’s worth considering that even though nothing happened stressfully that you can detect, it doesn’t mean nothing stressful happened. “Owners are not always aware of what a dog experiences that could be upsetting,” says the doctor. Maybe you changed where you walk her, and she did not like the new territory. Or she always had a low-level phobia that was in the background — of noise? of something else? — that has blossomed because of an unanticipated experience of which you remained unware.

Whatever the underlying cause, the gold standard for treating the dog is very gradual desensitization where you get her to reverse her new habit voluntarily rather than by forcing her, as that will only make things worse. Think of someone who’s afraid of snakes,” Dr. Borns-Weil says. “If you force the person to hold one, he’ll end up even more afraid. You’d have to start just by talking about snakes, then maybe looking at a picture of one together, then bringing in a three-dimensional mockup. Then the person could be taken to a house where he knows there’s a snake but not look at it, proceed another day to seeing a tank across the room partially exposed, and so on.

“It’s the same with a dog. You have to help her stretch her comfort zone in her own time. Maybe start by taking her on the porch, right outside the back door, and giving her food treats there. When she is comfortable with that, go with her to the end of the porch, then, on another day, walk down one or two steps, perhaps luring her with a tiny piece of meat on each step to help her learn that when she gets there, nothing bad happens.

“Don’t work in a linear way,” Dr. Borns-Weil advises. “The dog will think, ‘I don’t like how this is going.’ Take a step down, then another, then go back up to the first step on a subsequent day, then back to the door, and then over to the steps again. And avoid any kind of punishment as you’re retraining her, no matter how frustrated you feel and no matter how many weeks or months it takes. That will only set her back.

“When she does what you want — walking further or eliminating outside — reward her liberally with praise and treats. You may also want to try the side door or the front door if it’s the back door that’s giving her trouble. Sometimes a small change like that can make a big difference.”

Keep in mind, too, that because your dog was trained with a wee wee pad, somewhere in the back of her mind relieving herself indoors remains an option for her, which might make your desensitization work take a little longer.

Note that some dogs do a little better with a Gentle Leader than with a regular leash. “Dogs who are really fearful often appreciate having that harness on,” Dr. Borns-Weil says. “It gives them confidence. It reminds them that you’re there with them.” It’s what she used to coax her own dog outside when he was afraid to leave the house.

Finally, says Dr. Borns-Weil, “a sheltie absolutely needs exercise and a job to do” — physical and cognitive stimulation. “I think boredom and anxiety are related for dogs, and particularly for a smart, active dog like a sheltie,” she says. To that end, keep your pet busy by having her chase a ball or work with puzzle games. Getting her mind off what’s troubling her may very well help ease the transition back to the outdoors.

If all else fails, consider anti-anxiety medication to help her over the hump.

Coughing Without any Apparent Cause

Q We have a 7-year-old Pomeranian adopted from an animal shelter when he was 6 months. Shortly after his adoption he developed a cough that will last 2 to 3 days at a time. Once or twice a month the cough reappears, along with gagging similar to that of a cat who has a hairball in his throat. I had him checked for kennel cough — results negative. And about 3 years ago, a surgeon checked him for a collapsed trachea. Again, results negative. His weight is normal, and he has plenty of energy. He also sleeps with a humidifier running at night, but nothing has prevented the recurrence of this annoying problem. Any suggestions from you would be most gratifying.

AThe problem does sound vexing, and we are sorry to hear it hasn’t yet been solved.

Without knowing all the facts surrounding the case, we believe it remains possible that he has a collapsing trachea, or narrowed windpipe, through which air must pass to the lungs. The condition can be dynamic, meaning it comes and goes. Pomeranians are certainly one of the breeds predisposed to having this congenital condition (meaning they are born with it) as are other toy breeds, including miniature poodles, Yorkshire terriers, and Chihuahuas. And coughing is one of the hallmark signs.

Diagnostic tests for a collapsing trachea include x-rays and fluoroscopy, which provides images of the inside of the body in real time so that the veterinarian can see what’s happening in the trachea and the lungs as a dog inhales. If your dog does turn out to have a collapsing trachea and it proves not to be a severe case, you will probably be able to keep the condition under control with medications that include cough suppressants and anti-inflammatory drugs that facilitate breathing. Medications to reduce inflammation in the trachea itself can also be administered. For a dog whose condition is severe, surgery will be necessary.

Other possibilities for your dog’s coughing include an upper airway problem such as epiglottic entrapment or laryngeal paralysis. The epiglottis is a flap of elastic cartilage tissue that covers the windpipe during swallowing so food goes down the right “pipe” and not into the lungs. But if it overshoots the mark and partially covers the windpipe, or trachea, even while food is not being swallowed, it can lead to hindered breathing, which might manifest itself as coughing. If a dog is overweight, weight loss can manage the condition, but in some cases surgery is necessary.

Laryngeal paralysis is a long shot. It usually occurs in older dogs, and at 7, your small-size Pomeranian is by no means geriatric. But the condition remains a remote possibility. Laryngeal paralysis is a creeping paralysis of the larynx, colloquially known as the voice box, that lies between the mouth and the trachea. The paralysis is a problem because the larynx is supposed to open widely when a dog breathes so air can easily reach the lungs. If it can’t, breathing is compromised. A veterinarian can confirm the diagnosis with a laryngoscope, a long, tubular instrument with a light attached that is put at the back of a dog’s mouth while he is under anesthesia. If the condition is present, a surgery can greatly ameliorate its effects.

We suggest your dog undergo a thorough diagnostic workup to see if he has any of these conditions that could induce coughing. Perhaps forego the workup with a veterinary surgeon, as you have done in the past, and work instead with a veterinarian board certified in internal medicine or emergency and critical care, either of whom will have extensive training in diagnostics. The letters DACVIM following the vet’s last name will signify internal medicine; DACVECC means emergency and critical care. n