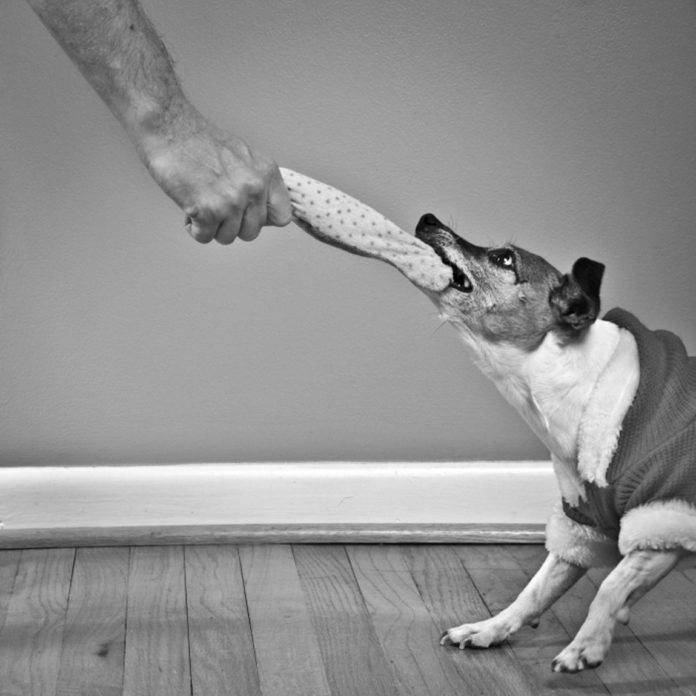 “When I first got into animal behavior,” says Tufts Animal Behavior Clinic Director Nicholas Dodman, BVMS, “the story was that you didn’t want to play tug of war with your dog, especially if he was displaying aggression. The thinking was that it would over-build a dog’s confidence and the next thing, he’d be biting you. It fell into the category of games that were tough in nature, like getting down and pushing a dog and waiting for him to push you back — stuff that might be done by men who play by roughhousing.

“So I, along with many other behaviorists and trainers, too, advised against playing tug of war with a dog in the belief that it would make him too aggressive. Experience has shown that it’s not so cut and dry, however.”

It turns out that games of tug allow a meek dog to build self-confidence. “I’ve found it useful for dogs with, say, submissive urination,” Dr. Dodman comments. “You can even put the tugging toy — a piece of cloth or a rope toy — into the mouth of a dog who demurs. Then you say, ‘Grrr’ in a playful way and let the dog win, praising him for his victory.”

You can even train the dog in the process. When your pet reaches the point that he comes over to you with a toy to play tug, you can take it from him with a “Give it” cue, then tell him what a good job he did by “handing” it over — returning the toy to his mouth to get the game going. That helps establish who’s the leader. (It will also help you when your dog starts mouthing something he shouldn’t — like a $300 Manolo Blahnik shoe. You will have trained the dog to give you whatever’s in his mouth.)

Dr. Dodman cautions that you want to help a dog go from under-confident to confident, not over-confident. “I taught one couple how to successfully play tug of war with their dog, who finally stopped urinating submissively,” Dr. Dodman says, “but the pendulum began to swing in the other direction. He started displaying owner-directed aggression.”

The bottom line: If your dog needs a rise in self-esteem, go ahead and play tug of war. But if he starts getting a little too big for his britches, always getting controlling, possessive, and too feisty, discontinue the tugging — and any other rough games.

Will the Teething and Nipping Ever End?

How Your Personality Impacts Your Dog

What Won’t Work When Teaching “Come”