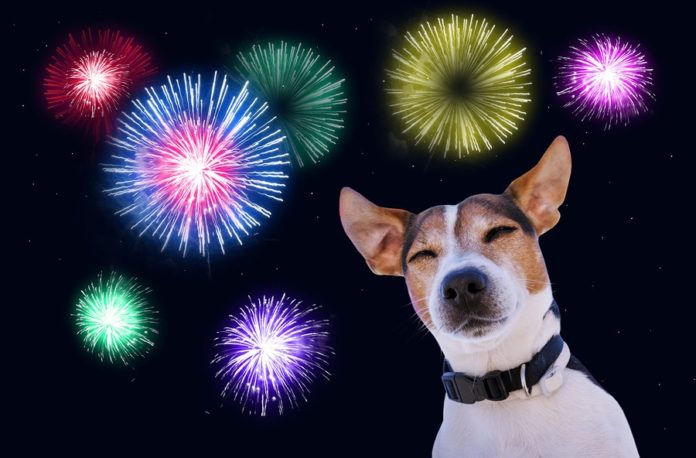 Noise phobia is one of the most difficult problems to treat in dogs, and people with dogs who are afraid of loud noises are reminded of that annually on July 4th and, very often, New Year’s Eve — two holidays that come with booming fireworks displays. Their dogs shake, whine, run for cover, destroy household effects, and, generally cope very poorly with fireworks’ loud bangs. Why shouldn’t they? Dogs have no idea that fireworks are celebratory. For all they know, colorful warriors are invading from the sky and, in the process, hurting their ears, which are much more sensitive to sound than ours.

In Italy, a lot more holidays come with fireworks. There’s the Holy Day of Obligation to Commemorate the Assumption of the Blessed Virgin Mary into Heaven on August 15th, Venice’s Feast of the Redeemer in July, Rome’s April birthday celebration, Pisa’s Festival of Saint Ranieri in June….

Italians also love their dogs, at least as much as we do! So it only makes sense that the small Northern Italian town of Collecchio in the province of Parma (think Parmesan cheese) enacted a law a few years ago requiring all fireworks displays to be silent. It was put on the books not only to protect pets but also wildlife, who suffer from the cannon-like sounds of fireworks, too. An Italian fireworks company called Setti specializes in the silent night-sky glitter.

It might seem anti-climactic to have the light show without the noise. But with the silence comes more saturated color. With sound, there’s only a hint of the color you would otherwise get because the initial burst is too powerful, diluting the power of the materials inside the fireworks mechanism that would otherwise give the display richer hues.

Italy isn’t the only country where dogs are starting to receive protection from the sound of fireworks. It’s happening all over Europe. In Great Britain, where a firm called Fantastic Fireworks makes silent displays in the sky, venues close to wildlife or livestock frequently allow quiet fireworks only.

What’s good for dogs is good for people. The World Health Organization lists 120 decibels as the pain threshold for sound. Fireworks are typically higher than 150, and sometimes as high as 170. They can even contribute to hearing loss.

We do have silent fireworks here in the U.S. The “comet tail,” for instance, quietly shoots into the sky with a trail of sparkles before quietly fizzling out. What’s new are dazzling displays without the attendant bangs. You don’t get the large aerial explosions, but it remains a terrific show.