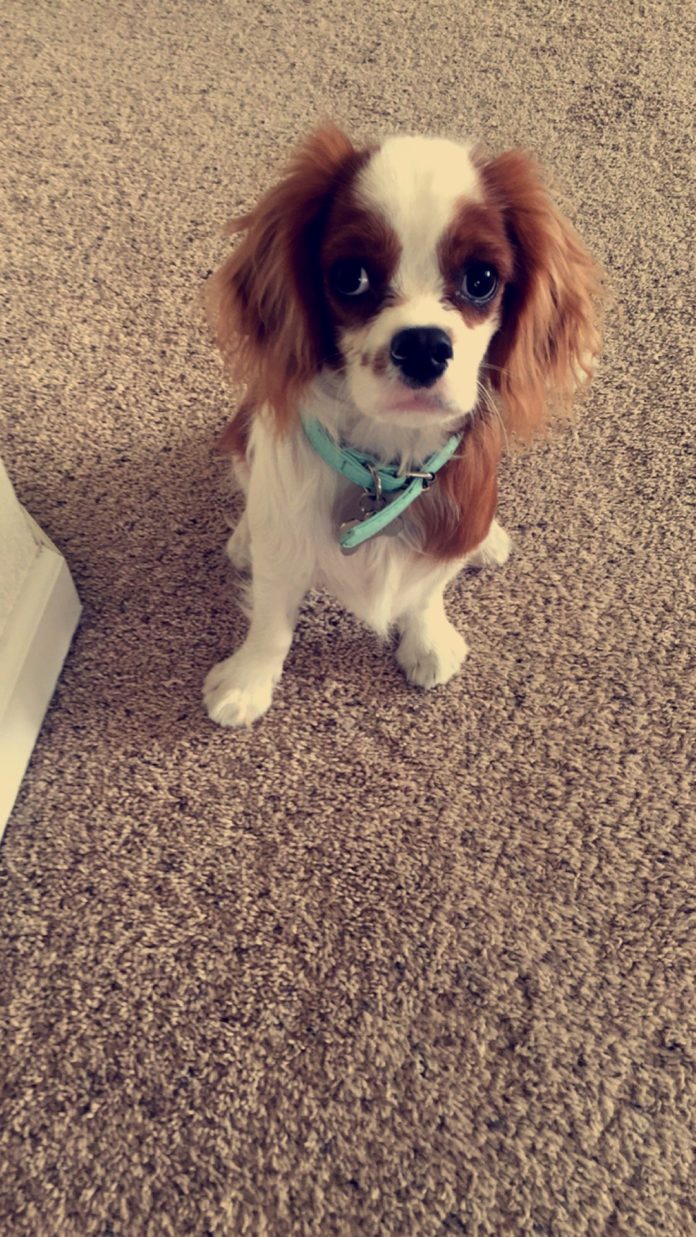 Vicki Hale of Georgetown, California, is concerned. Her seven-month-old Cavalier King Charles spaniel, Kingsley, has been “a very happy dog up to now” but has “started to be a little shy and has also started growling at people he does not know,” she explains.

“I am not sure how to handle this,” Ms. Hale says. “Is he starting to be a little protector?” She adds that he has not been neutered yet and that she would like to breed him two or three times before he is, implying that maybe his being intact is what’s making him aggressive. “What can I do about the growling?” she asks.

Why a dog would not start growling till the age of seven months
“It certainly is unusual to see an aggressive Cavalier King Charles spaniel,” says the head of the Tufts Animal Behavior Clinic, Stephanie Borns-Weil, DVM. “They’re usually pretty easy-going dogs.” She wonders if he has some aggression stemming from fear, from the urge to protect not his owner but himself. The timing of the onset of the aggression increases the chances that he does. Fear-based aggression “is rarely demonstrated before adolescence,” Dr. Borns-Weil says, and adolescence in a dog begins slightly before the age of one year — the point at which a dog is considered a “juvenile” rather than a puppy. (A puppy is not considered an adult until he reaches the age of two.)

Interestingly, the life-changing moment at which a puppy is primed to become fear-aggressive does not generally occur when he is an adolescent. It happens much earlier, during the sensitive period of learning: ages two to 12 weeks. That’s when a pup is soaking up information about his environment like a sponge. If something bad or untoward happens during that time — a gruff person scaring him, yelling, or acting in some way that the young dog sees as unkind and threatening — the dog will not appear to have integrated the unfortunate experience right then but could start to exhibit his fear as aggression to keep harmful people away somewhere between six months to a year, or maybe even a little older. Thus, it’s not surprising to Dr. Borns-Weil that Kingsley is acting aggressively toward strangers with growls that have started only now.

What could the traumatizing incident have been? It could be hard to say. Often, an owner will witness the event during which a tiny pup learns to be afraid of people. But not always.

Then, too, it’s possible there never was an instigating moment. Some dogs simply inherit a predisposition to become anxious and fearful and thus, aggressive, although because Kingsley is anxious only about other people and not other dogs, fear-based aggression may indeed be his issue.

Tackling the problem
If Kingsley’s aggression is simply the result of an anxious temperament — and it is too soon to tell — Ms. Hale may want to take the prudent step of reconsidering her breeding plans. Why spread a behavior problem that has a genetic component?

If his aggression is the result of fear, however, neutering will not help. What will help such a dog is never to punish or reprimand him for growling. That will make him more anxious without resolving the underlying issue. And increased anxiety only further fuels an aggressive tendency. “If you suppress a growl,” Dr. Borns-Weil says, “a dog may go right to a bite.”

What will also help is making sure not to “flood” the dog with forced interactions with unknown people to “snap him out of” his problem. That will not desensitize him; it will only sensitize him further. To that end, Ms. Hale should do everything to keep Kingsley away from strangers for now, even if it means walking him in new areas where fewer people are likely to be out strolling. She also should not let people, even kind-looking people, approach her adorable dog to pet him. It’s okay to tell them nicely but firmly, “No, he’s afraid, but thank you.” That will give her dog confidence that she is protecting him.

Instead of letting people walk up to Kingsley willy nilly, Ms. Hale should arrange for planned “surprise” encounters with people she knows well. They could approach her from the opposite direction at a pre-arranged time and not come too close but casually drop a wonderful treat at Kingsley’s feet — without looking at him — while conversing with her. Over time, the first “surprise” fellow walker, and then the second, and the third, might get a bit closer, until, over a period of several weeks, Kingsley might take a delectable treat from one of their hands. Finally, he might even let himself be stroked on the muzzle.

It’s that slow-and-steady approach — not rushing things — that will allow a “teenage” dog with fear aggression to regain his composure and self-confidence so that he can enjoy the company of people other than his owner. Over time, Ms. Hale will see if this strategy works. If it does, her patience up front will give her a lifetime with a happy dog she doesn’t have to be afraid will put off other people.

If it doesn’t, she may need to consider the possibility that her pet simply has an aggressive side due to inborn nervousness. She still should treat him kindly and gently and keep him away from situations that she knows will trigger his aggression; harsh treatment can only serve to heighten the aggression.

Though neutering an aggressive dog will not help decrease anxiety or fear-based aggression, it will stop the problem from being passed down to a new generation of Cavalier King Charles spaniels.