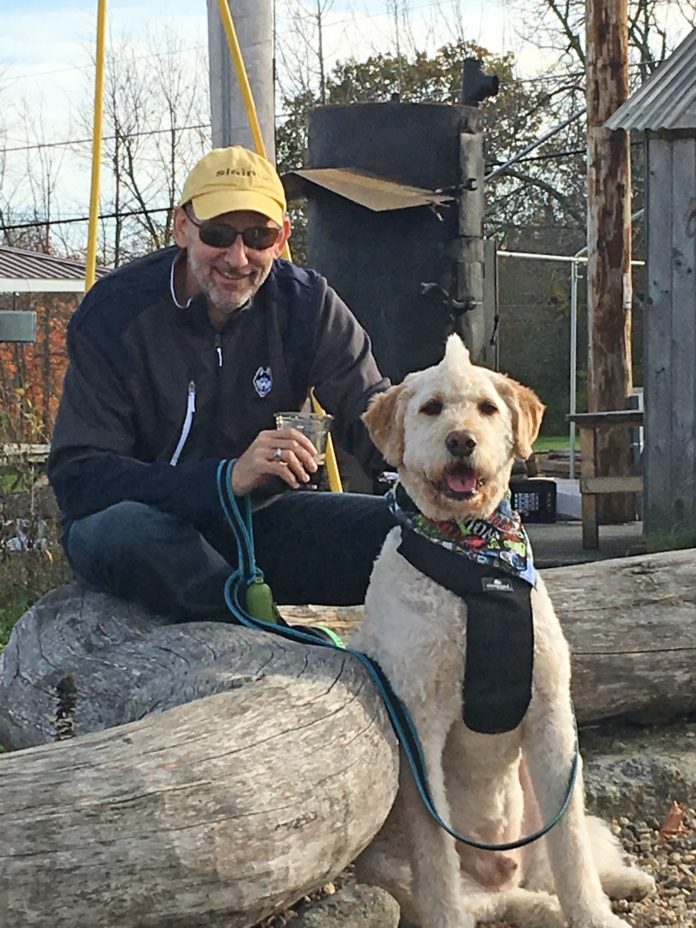 Steve Wojnar of Newton Centre, Massachusetts, is concerned that his five-year-oldgoldendoodle, 95-pound Angus, “has become steadily more territorial about space he seems to consider his. He has never been particularly dog-social,” Mr. Wojnar says, “although he was never aggressive before and just chose to basically ignore other dogs. Over the past several months, however, he has started growling and barking at dogs who walk past our house. Most disturbing, he has been growling and barking at dogs who walk by when we have him out at our local pub, where he is allowed to sit or lie near or under the sidewalk tables. He has even taken to getting up (or trying to — my hand is always on his collar) and moving toward passing dogs, growling and barking all the while.

“What’s more, although he has always loved every person he has ever met, he has begun growling at people who try to pet him, even people he knows well, like the pub employees. If we walk him past the pub, he is incredibly friendly and glad to see them, and they can’t pet him enough to make him happy. But once he’s sitting or lying down next to a table, he will growl at them if they approach. He doesn’t bare his teeth, but just a growl from a dog is enough to put people off and is a behavior I do not want my dog displaying.

“What is the best way to correct this behavior? We really love having a pint in the evening at the pub, and having our dog with us has always been a real joy — but we have stopped taking him there. I’m concerned that his increasing aggression towards other dogs will mushroom into a larger problem and make it difficult even to take him for a walk. How do I nip this in the bud and get back the social, engaging dog we used to have?”

Mr. Wojnar, for starters, it’s probably best not to think of Angus’s changing behavior as an issue of territoriality. “Territoriality is location specific,” says Stephanie Borns-Weil, DVM, Head of the Tufts Animal Behavior Clinic. “And the fact that the dog is fine when walking past the pub or even standing near a table, but not while sitting or lying down at the very same spot argues that ‘territory’ is not the issue.” He does not see the pub as his. So what is it then?

Sorting through the problem

“The fact that the behavior emerged when the dog was already five years old, which is not a typical time that one sees the beginning of aggression in dogs, makes me wonder if there is something medical going on that Angus’s owner has not considered or perhaps does not know about,” Dr. Borns-Weil says. “Pain or discomfort is a significant risk factor for aggression in dogs, even in dogs with no history of aggression.” And Angus may display it only when he is at rest rather than walking because engaging in physical activity may distract him from the pain. He may also feel more vulnerable when he is seated or lying down because he cannot easily move away.

Alternatively, Dr. Borns-Weil posits, “it’s possible that the dog is not in pain but that his wariness of others in certain situations is not new.” Sometimes, she explains, the early signs of anxiety are quiet signals of not wanting to be approached that can go missed for quite a while. These include retracted ears, looking or turning away or leaning back, or a hard stare. Only after these cues repeatedly don’t work might a dog feel forced to escalate his behavior to get his message across.

In other words, Angus may never have been comfortable with other dogs (Mr. Wojnar says himself that his pet has never particularly been “dog-social”). Being put in a situation where he is not free to go his own way but forced to encounter dogs coming near him on a regular basis “may have caused him to escalate to proactive threat behavior in the form of growling and barking,” Dr. Borns-Weil says. That would be his way of insuring that he keeps them at a distance. And he sees that his tactics do in fact work. The dogs keep going, moving away as he reacts, so he learns through experience that acting out will keep his space dog-free, and people-free in the bargain.

Dr. Borns-Weil advises four steps for getting Angus over the hump.

1. Rule out medical issues. Because Angus is getting upset only in certain kinds of situations, chances are on the low side that his aggressive behavior is the result of a medical problem that might be causing him pain. But just to be on the safe side, his owner should take him for a wellness check to make sure he’s not experiencing physical pain that could potentially be causing him to “lose it” with other dogs, and sometimes, with people. You always want to cover your bases.

2 At home. In the short run, at least, Angus should not be given access to the areas he likes to bark from. “Each time he barks and the other dog moves on,” Dr. Borns-Weil says, “he thinks he has chased it off, which is rewarding. That makes the behavior virtually 100 percent self-reinforcing.”

A long-term solution would be for Mr. Wojnar to teach Angus to be quiet on cue. This would involve telling the dog “Quiet” (just once) when he starts barking as dogs and people pass by and rewarding him immediately with delectable treats and warm praise when he complies. Gradually, not barking at others walking by the window will become a habit. Mr. Wojnar can also train Angus — again with treats and praise — to go to a designated place away from the window when others approach. That will serve the dual purpose of keeping him quiet and also removing him from the source of his anxiety.

3. At the pub. People should not be allowed to pet or even approach Angus when he is lying down and restricted by his owner’s hand on his collar. Interactions he does not desire should not be imposed on him. To be able to keep taking Angus to the pub, Mr. Wojnar can teach him to lie on a mat under the table where he will be — and more important, will feel — out of reach. He can even have Angus don a vest that says, “Please ignore me.”

4. On walks. Mr. Wojnar reports that Angus has never been aggressive while off leash at the local dog park. Instead, he simply keeps to himself, preferring to chase and retrieve his Frisbee rather than mingle with others of his kind. With that in mind, Mr. Wojnar can feel comfortable continuing to take Angus to the park but should conscientiously avoid attempting to introduce him to other dogs any time that he is on the leash — either going from the parking lot into the park or leaving. If Angus growls, a cue such as “Let’s go” or “Heel” (which is incompatible with barking and growling) is in order. As with other behaviors, the trick to a dog’s learning to comply is to immediately reward him for following through. In this case, complying would mean moving quickly by without incident.

It may be possible not only to protect Angus from situations that prove upsetting for him but also to teach him that other dogs — and people — are not threatening, even when he is on leash and they are walking by. It would involve planned, off-leash introductions to one or two gentle and friendly dogs and their owners who have been picked out beforehand, replete with lots of praise and treats for cooperative behavior. Then, once Angus saw that the dogs were okay, his owner could arrange to have him sitting on-leash at the pub while the new friends walk by, again praising and rewarding him for not overreacting. Over time, he would be able to generalize that calm reaction to instances of other dogs crossing his path while he is leashed.

If any of the steps here do not improve Angus’s behavior, it may be time to seek the help of an animal behaviorist. A board-certified veterinary behaviorist would be able to provide targeted behavior modification and prescribe anti-anxiety medication, if necessary. But it very well may not reach that point. Mr.Wojnar seems to have identified the unfortunate change in Angus’s behavior early in the game.