Home DOG TRAINING AND BEHAVIOR Is the Licking Medical or Behavioral? Or Both?
Print
Email
Facebook
Twitter 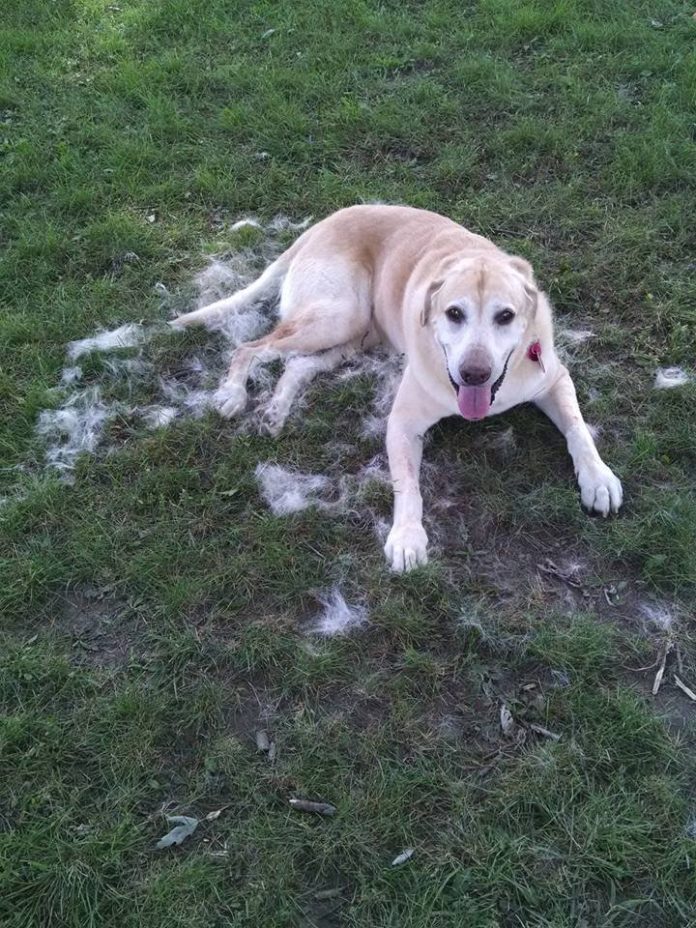 Deb Nicholas of Fremont, Ohio, is worried. Her 11-year-old yellow Lab, Racer, has run the gamut of problems with licking himself after surgeries and when he has seasonal hotspots. He also licks obsessively when something upsets him — a bee buzzing by, someone accidentally bumping into him, etc. A lot of times he just sits and licks the air.

“It seems to be getting worse as he ages,” Ms. Nicholas says. “We have tried massage therapy, aroma therapy, Comfy Cones, not-so-comfy cones, muzzles (sadness), bandages, and bandages that are almost like casts. Right when we think we have a sore licked (pun intended), the smallest thing can set him off; he licks himself raw and we are back to square one. All the common stuff has been ruled out: severe allergies, fleas, and so on. Is our last resort psychotropic drug therapy? I am not keen on that, but I hate for the big guy to be so miserable. I should note that he takes some over-the-counter medicines for his aging joints and a prescription for Previcox to reduce arthritis pain, which is already a big part of the budget.”

Poor Racer! It sounds like he is really suffering.

Ms. Nicholas, this is a challenging one. That said, we are not convinced Racer’s problem is behavioral rather than medical — or, at least, not completely behavioral. If a dog is having seasonal hot spots, he should be referred to a veterinary dermatologist for more allergy testing. Hot spots that can be traced to the seasons are most commonly about allergic reactions. Also, you say you put him in bandages that are like casts, which suggests he’s licking his limbs. If he is licking his limb joints, he may be feeling pain from arthritis despite the drugs you have been giving him and may need more aggressive pain management; a trial of a robust pain medication might prove helpful for relieving the licking on his limbs. Other licking may be medical as well. Consider that air licking could be the result of GI problems, specifically, of stomach pain — which can be caused by some drugs in the category that includes Previcox. (One study of floor-licking in dogs also found that most of them have GI abnormalities.) In such cases, once the GI issues are addressed, the licking stops.

In other words, before arriving at a single diagnosis of compulsive licking, it would be worth doing an even more thorough work-up to rule out medical causes for the licking, including seasonal allergies, pain, and GI distress. Licking and scratching are often misdiagnosed as compulsive behavior or attributed to anxiety when those psychological issues are not the culprits. But that doesn’t mean a physical problem and a psychological one can’t happen together — or follow each other.

If Racer’s licking is caused by itchiness born of a medical problem, the itchiness can cause him severe anxiety, which would only be exacerbated by attempts to stop the itching without getting to the root of the problem. And a dog who is not allowed to lick (akin to our version of scratching) will feel even itchier.

In other words, what starts out as medical can become behavioral. And licking for behavioral reasons seems breed-based, at least in part. In fact, excessive licking that leads to or exacerbates already-developed skin problems is overrepresented in golden and Labrador retrievers, like Racer. So it’s quite possible, perhaps even likely, that he has a breed disposition to start compulsive licking in the wake of a medical issue such as a bee sting or an arthritis flare-up as well as during times of emotional stress.

Allergies, too, are closely related to anxiety that can lead to excess licking. In human medicine, there is a field called psychoneuroimmunodermatology, which looks at and treats the nexus of psychiatric, allergic, and dermatological problems. Anxiety can actually predispose a dog to allergic dermatitis (skin inflammation) because the mood disorder works to decrease the epidermal barrier — the skin ends up thinning — and thus, allergens can enter more easily.

Because of Racer’s high risk of compulsive licking due to his breed, and because his problem has so far not been traced back to a medical cause (although keep trying), it may not hurt to talk with your veterinarian about starting him on an SSRI such as fluoxetine (Prozac). Then, if a medical cause is indeed found and treated and the physical illness or condition resolves, the SSRI can be discontinued. Don’t worry about putting him on a psychotropic medication. It won’t sedate him — it will simply make him better able to cope with anxiety or depression resulting from his skin condition.

We hope you are able to get to the bottom of this. Please keep us posted.