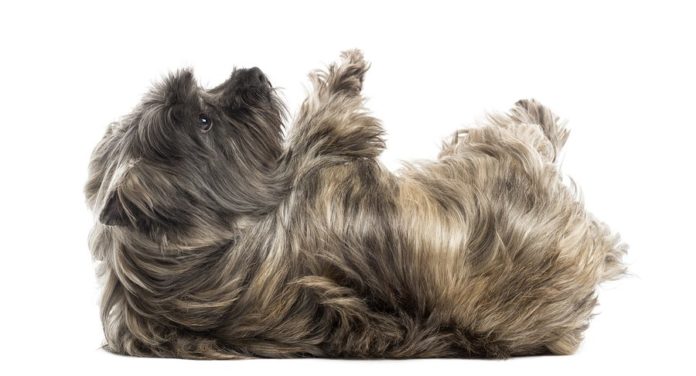 We have devoted no small amount of space in Your Dog to teaching people how to rein in an aggressive dog, and for good reason. Aggression is the most common behavioral problem we see, and also the most dangerous. One wrong move by an overly aggressive dog, and someone, or some dog, could get hurt — or worse. It doesn’t matter whether the aggression is territorial or comes about because a dog is in pain, or even is born of fear. A dog bite (or bites) can be very serious.

But there’s another kind of behavior among some dogs that could make life with a pet miserable in a different way (although not dangerous). It’s submission arising from fear — running under the bed at the sound of an owner’s deep voice, cowering, urinating at the sight of a human family member, and generally acting scared to death. A lot of dogs have fear of people outside their human families. But when a dog is afraid of the people in her own home and copes by skulking around to stay out of imagined trouble, it can make having a pet heartbreaking, since all most owners want to do is love their dogs, be close with them.

With dogs in general, the approach is supposed to be “fun, fair, and firm.” Family members are supposed to do their best to give their pets a good, fun time with lots of romps outside, lots of shenanigans, trick-teaching, get-togethers with other people and dogs, and perhaps classes such as agility or flyball. They’re also supposed to be fair by letting a sleeping dog lie, not taking a dog’s food just because they can, and not making demands of the pet simply to show who’s boss.

Finally, “firm” enters the picture for letting a dog know the rules of a household. Perhaps they include not letting the dog on the bed or not begging at the table. Whatever those rules are, they have to be stuck to religiously because once a dog sees an in, she will go for it. (She’s not being bad, just smartly opportunistic.)

With an aggressive dog, “firm” comes out in front. The dog gets no free lunch, so to speak, and must exhibit good behavior to be petted, to be taken outside to play, and so on.

To help a submissive dog afraid of her own shadow (and yours), on the other hand, “firm” goes out the window.

The Reverse Dominance Program
With Tufts’s Reverse Dominance Program, it’s bending the rules that takes center stage. Treat your submissive dog with kid gloves, and you will build up her confidence so that she feels comfortable around you, as well as comfortable in her own skin (which, after all, is what you’re really looking for). It’s a matter of teaching her that everything in life is free.

For instance, rather than feeding your scared pet only at meal time, feed her for any or no reason. Even free-choice feeding is not out of the question.

In addition, pet your dog if she asks for attention; don’t make her work to be stroked lovingly on the side of her muzzle. Get a pull toy or stuffed animal toy and let her grab it from you while you tell her in a high-pitched voice, “Oh, you win!” This approach will build your dog’s self esteem.

Similarly, let your shy dog win tug-of-war games to build bravado, and play chase games during which she chases you — and finally catches you so that you give her lots of rubbing and warm praise.

Allow your dog on high places, too, or spend more time on the floor with her. The way a dog sees it, being at eye level increases her authority. Giving your dog the run of the house as much as possible also will up her ego game.

At the same time, don’t use body language your nervous dog would consider threatening. Avoid direct eye contact, and, when possible, position yourself so that the side of your body is facing her rather than the front. She will perceive that as less aggressive.

The hard part will not be lavishing your shy, anxious pet with loving attention and a permissive attitude. It will be refraining from rewarding submissive behavior. Yes, you want to comfort her when she cowers, but you want the centerpiece of your approach to build her confidence with fun activities. That is, the aim is to literally change the game plan rather than teach her to perceive that her plight is an awful one. The best bet is to just to act generally gentle around her and to try to show her a good time through play.

Note: Don’t worry that using Tufts’s Reverse Dominance Program will become too successful, leaving you with an aggressive, overbearing pet. In just about all instances, dogs who require the program to feel confident and settled don’t end up taking undue advantage. For those very few dogs who do end up getting too big for their britches, growling if you take their toys and such, the thing to do is back off from letting them know that everything in life is free and start making them work for valued resources, including food and play time. Make them sit first or perform another trick.