Home DOG TRAINING AND BEHAVIOR Misbehavior In Your Absence Can Signal a Case of Separation Anxiety.
Print
Email
Facebook
Twitter 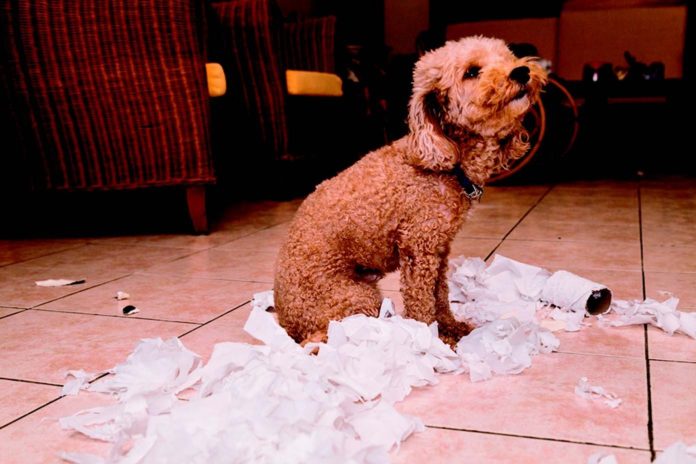 She’s perfectly house trained as long as you’re home but relieves herself on the floor when you’re not there, making you pay for leaving her alone. Or she pulls all the trash out of the garbage can and strews it throughout the house. Rest assured she’s not being vindictive. She’s feeling panicked.

Says Stephanie Borns-Weil, DVM, head of the Tufts Animal Behavior Clinic, “People think they can tell. But what they’re seeing is not remorse but fear. The dog has learned to be anxious because she knows the owner is upset by the mess.”

How do you solve this common problem? After all, your dog has got to be home alone sometimes.

The standard of care for easing a dog out of separation anxiety revolves around planning your departures. You leave the house for longer and longer periods of time to gradually desensitize your dog to your absence. The problem: it sounds good in theory, but it often doesn’t work in practice. Desensitization progresses in increments of minutes, not hours. Thus, if you have to go to the grocery store to do your weekly shopping, it’s going to take longer than the time alone to which you’ve already acclimated your dog. If you have to go to work for the day, all bets are off. Life simply gets in the way.

Tufts has a new, three-pronged way to resolve separation anxiety, depending on the nature of the issue.

Barrier frustration. Some dogs go into panic mode if they are confined to a crate or behind a gate. It can trigger separation anxiety even if the owner is home. A lot of owners, for instance, will confine a dog through the night, and the dog keeps them up through the wee hours, banging around in the metal cage and whining because she is so upset to be by herself.

Solution. The strategy here is to undo the confinement tactic and take a leap of faith. Would the dog feel better if she could sleep in your bedroom with you, perhaps on her own doggie bed? If you’re afraid she’ll wander away to void, you can set up an exercise pen in your room to confine her while keeping her close or even just tether her with a long line. But you may find you don’t need to restrict her movements at all. Being near you, the chances are good that she will feel calmer and get some shut-eye along with you. No separation, no anxiety.

Solo-phobia. This is what people tend to think of when they think of separation anxiety — a dog who can’t bear being left alone, period.

Solution. She’ll do well in doggie daycare if she likes other dogs, or with a neighbor or relative if other dogs spook her — anything, as long as she doesn’t have to be by herself.

If such an arrangement is simply not possible, it often helps to move all the pleasant things a dog associates from those times she’s with her owner into times she spends alone. For instance, wait to feed her until you’re leaving. And make it so that the food lasts. Fill Kongs with all sorts of special, delicious foods and freeze them, for instance. That will keep your pet busy for a while after you close the door behind you, as will various other food puzzles.

In addition, leave out special toys, perhaps scenting them with interesting odors your dog will enjoy. Leaving on Dog TV or Animal Planet might help as well. Finally, give your dog a view. If you have glass sliders or a couch your dog can climb onto to look out the window, place a bird feeder within view. That might be to her what a favorite television show is to you.

When you come home, put away all the special treats and toys. That will help her look forward to them when you leave because she’ll know that’s the only time she gets to play with them.

Hyperattachment to owner. Having what animal behaviorists call a Velcro dog can be particularly difficult to address. They won’t leave your side even when you go to the bathroom. It often afflicts dogs who were warehoused in puppy mills and experienced wholesale neglect.

Solution. Never exhibit frustration. Your pet doesn’t mean any harm, and getting angry at her will only make her more nervous and less confident about spending any time alone.

In addition, try all the aforementioned tricks of the trade — doggie daycare, time with other people when you’re not home, wonderful treats and toys left around in your absence, interesting television shows, and absorbing bird feeders. If none of those work, consider medication. Fluoxetine (Prozac) has actually been labeled for separation anxiety in dogs. Short-acting clonidine and alprazolam (Xanax) might reduce panic, too.

You’re not a failure if you resort to drugs after trying lifestyle measures. You’re a caring owner who’s availing yourself of all the tools in the arsenal so your dog won’t suffer.