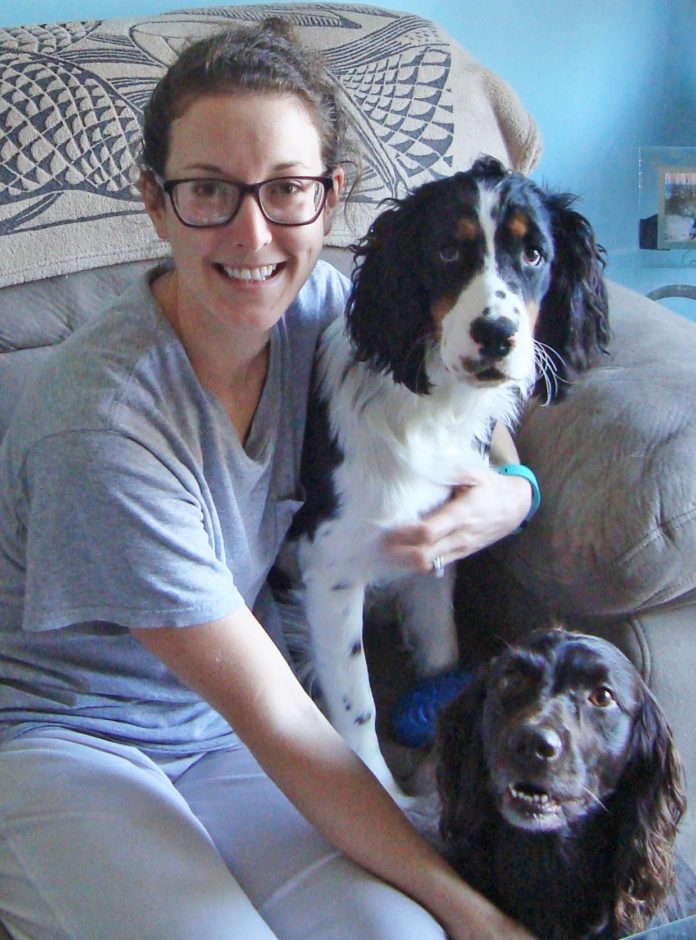 Alabama-native Maegan White loves traveling with her husband and their dogs, Maui and Dexter. Maui, the couple’s boykin spaniel, is so friendly that he helped neighbors from India overcome their fear of dogs and even adopt one of their own.

But Dexter, an English springer spaniel, has proven challenging ever since an incident that occurred when he was about 6 months old, as the Whites and their dogs were waiting in the drive-thru lane of a fast-food restaurant.

“Dexter’s looking out the window, all curious, and this African-American couple walks by and he just starts barking and causing a fuss like somebody’s trying to get him,” she recalls.

A few weeks later, when the family was waiting at another drive-thru, she carefully observed his behavior because she wondered if maybe it was just that he didn’t like people approaching him in the car.

“Soon enough, this white couple walks by. I’m white. My husband’s white. They walked by and Dexter didn’t even think anything of it. He watched them walk by. Nothing. A few minutes later, a black couple walks by. He starts barking and going crazy again. I’m like, ‘Are you serious? How are you racist? You’ve been around African-American people! We have friends of all nationalities and races!’ But there’s something about being in the car and having African-American people walk by that just freaks him out. He barks and growls every time, but he never barks at white people,” she says. “Living in the Southeast USA with a racist dog is embarrassing!”

While dogs can be icebreakers with strangers — research has even found dogs can be conduits for forming friendships and social support systems — if they bark, lunge, or otherwise react aggressively to others, it can be upsetting for everyone involved. If they bite, it can be disastrous. As Dexter’s situation illustrates, reactivity can be particularly troubling if it makes a dog — and by association, his owner — seem racist. Some people may even worry that their “bigoted” pets are reflecting prejudice in themselves that they have not been aware of. But can a dog be racist?

Absolutely not, according to Alan Beck, ScD, director of the Center for the Human-Animal Bond at Purdue University’s College of Veterinary Medicine. While race is a biological concept, racism is a social concept, he says, and dogs simply are incapable of passing social judgements.

One of the reasons the notion of dogs acting menacingly toward people of one race or another is so charged in our minds has to do with our history as a country. Historically, dogs in the United States have been used to attack civilians in racially charged conflicts, from the Civil Rights Movement to the recent Dakota Access Pipeline protests on the Standing Rock Indian Reservation. But, Dr. Beck points out, dogs involved in those altercations are reflecting the agitation of their handlers, not any preconceived notions on their own part. If you start screaming at someone, your dog will get excited and potentially bite the person.

This reflective behavior can happen on a smaller scale as well. If your dog always acts menacingly toward people of a certain race, you might start to tense or reflexively take a step away when walking your dog, even more so than usual because you don’t want to be perceived as racist. Your dog will pick up on your discomfort and readiness for any aggressive tactics on his part, which in turn will only reinforce his reactivity. The vicious circle is complete, and while you might even think it’s about prejudices you now fear you have but somehow flew under your own radar, it’s simply about your anxiety to control your pet in what you view as a particularly fraught situation.

What’s all the reaction about if not racism?

“Dogs are very much aware of differences, especially if the difference is novel,” Dr. Beck says. “It is not a value judgement but a strategy” to keep safe from the unfamiliar. For a dog, people of a darker or lighter skin tone than he is used to could be unsettling in the same way as, say, people in sunglasses might be, or people in wide-brimmed hats or hoodies. It’s simply about a lack of exposure during puppyhood, when experiences seeing (or not seeing) other people is very firmly imprinted on dogs’ developing minds.

The Head of the Tufts Animal Behavior Clinic, Stephanie Borns-Weil, DVM, views it the same way. Some dogs react negatively to anyone outside of their family, she says. One client’s dog shows aggression toward large people; another barks at people who use a cane.

One particularly memorable session in Dr. Borns-Weil’s clinic involved a dog with a fear of middle-aged women. “The dog took one look at me and started barking and lunging,” she says. “It didn’t have anything to do with me. His reaction to me reflected insufficient socialization and a history of using aggression to manage his fear.”

In some cases, Dr. Borns-Weil and Dr. Beck both say, what seems like prejudice comes not just from lack of familiarity but from a negative experience associated with a person of a certain look, and the fear then gets projected onto others with the same look. It doesn’t mean the dog was mistreated by someone with that look.

“You think, ‘Oh, the dog doesn’t like people who are XYZ; it must’ve been that someone who looked like that was mean to them,'” Dr. Borns-Weil says. But dogs make associations that don’t always accurately reflect true cause and effect. “Maybe another dog bit them when they were looking at a person with a hat on,” the doctor says, and from then on they blame hat wearers. “It can be any number of things. Dogs don’t always make the correct assumption.”

Dr. Borns-Weil suspects Dexter’s reactive behavior toward African-Americans whenever he’s at the drive-thru and not in other situations stems from some such context the dog misperceived in the past, and continues to get wrong. Maybe the first time he was startled by someone approaching the car, or by a disembodied voice coming out of a box, he happened to see black people and attributed the unsettling experience to them.

Training a dog not to react aggressively

“Learning that a difference is not a danger, be it sound, odor, behavior, or skin color, is what is necessary,” Dr. Beck says. That is why, for instance, “all service dog training includes introducing the dog to wheelchairs and walkers,” he explains. It takes the fearsome novelty away.

Of course, the best time to teach dogs that people of all shapes, sizes, and skin tones and with all types of gear — be it wheelchairs or hats — are harmless is when they are puppies. In fact, Dr. Borns-Weil recommends starting before a dog has had his final round of vaccinations, since the critical window of socialization, the sensitive period of learning, ends when a dog is around 12 weeks old. The risk for contracting a disease from socialization is low, she says, while the risk for becoming fearful and reactive without socialization is high.

“To optimize the dog’s chance of being able to accept a variety of people — old people, young people, dark-skinned people, light-skinned people, people with walkers and canes, people in wheelchairs, children, people hugging, people doing all the things that people do — they really have to have early exposure,” Dr. Borns-Weil says. “Otherwise they’re at risk for having a more challenging time interacting with those people.”

What if your dog is no longer a puppy?

Knowing what do when you get your next puppy is great. But what about your right-now dog, the one who is at least a few years old and already has his fears locked in? Or what if you recently adopted a dog who is not a puppy and find that he reacts negatively in situations that seem racial to you but are just about unfamiliarity to him? There are still things you can do to jolly him out of his fear.

“Just like people, you don’t outgrow your puppyhood, your childhood,” Dr. Beck says. “But you can work on it.”

Dr. Borns-Weil recommends a “response substitution” approach, such as asking your dog to “Look” at you when a person who elicits a fear response is approaching — then give a treat. The idea is for your dog to look to you for instruction and a good interaction instead of barking and lunging, thereby changing the context of seeing someone unfamiliar. Sometimes, you might want to step between the dog and the stranger, or turn your dog so his back is to the stranger. Leave the stressful situation as soon as possible.

Dr. Borns-Weil also points out that dogs are individuals with different thresholds for anxiety, so it’s important to recognize your dog’s fear signals, which can include panting, sneezing, raised hackles, “whale eye” (whites of the eyes exposed), flattening ears, licking lips, crouching toward the ground, or suddenly scanning the environment.

If your dog does seem fearful, be careful not to overwhelm him. For instance, one of Dr. Borns-Weil’s dogs doesn’t like to be touched on the head. So when kids in the neighborhood ask if they can pet her dog, she explains the situation and suggests, “She might enjoy it if you tossed her a treat. Why don’t you see if she can catch it?”

Other key points to remember:

–Reward your dog for not reacting. You might think he just didn’t see someone, but as Dr. Borns-Weil notes, “A dog’s ability to perceive is so much better than ours. They can smell someone six weeks after the person has stepped somewhere. A border collie can see hand signals from an amazing distance. So they’re not ‘doing nothing’ — they’re making the right choice.”

–Don’t yell or repeat commands. If “Look” is ineffective, follow up with “Leave it.”

-Use a basket muzzle if you’re afraid your dog will hurt someone. In addition to keeping everyone safe, you will be more relaxed and your dog will pick up on your calm body language.

-Never use punishing collars, like prong, choke, or shock collars. “Those are going to make your problems worse in the long run because the dog will associate the discomfort he feels during the correction with the person that already frightens him,” Dr. Borns-Weil advises. “And it increases their anxiety and breaks down trust with the owner.”

Finally, be patient and don’t give up. “Most dogs are incredibly resilient beings,” she says. “They want so much to be in relationships with us. They’re very forgiving.”