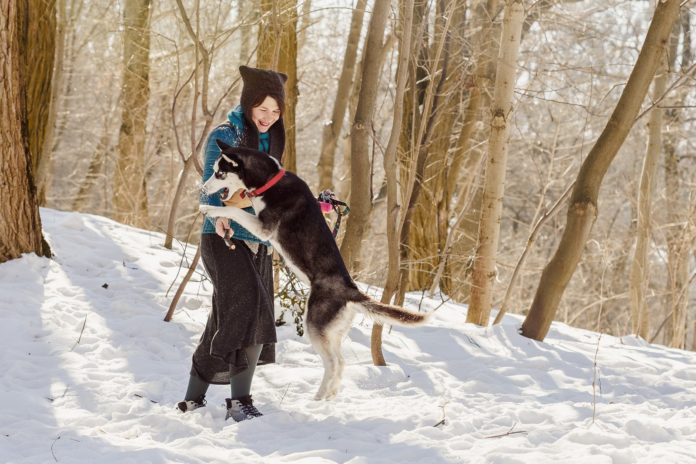 It’s one of the most annoying behaviors many dogs engage in — jumping on people, including their owners. They clearly don’t mean harm. On the contrary, they’re usually excited and trying to be friendly. But it can hurt. It can also soil clothes or even knock some people over, including the elderly and the very young. At the very least, it can be unpleasantly startling. Why is it often so hard to train a dog out of this behavior?

One reason is that people often say “Down” when a dog jumps, even though the dog has already learned that “Down” means lie on the floor. It makes no sense to a dog to be told to lie down when she is happily moving about on her hind legs. You have to differentiate between “Down” and “Off.”

The other reason it doesn’t work is that people are inconsistent in their training. While many people don’t like dogs jumping on them, some don’t mind it. And since a jumping dog generally means no harm and owners are happy to see them in a good mood, they send their pets inconsistent messages, telling the dog not to jump sometimes and letting the behavior go at others.

If a dog is allowed to jump on people sometimes and not others, jumping becomes a very compelling activity. Dogs’ brains — as well as ours — are set up that way. Think of gambling. It’s the winning sometimes that makes the activity so compelling. If a gambler never wins — the wheel never lands on the right number — he’ll give up. Likewise, if a gambler always wins, the activity won’t be as exciting, and he’ll be inclined to try to find something with more thrill power.

It’s all in the brain chemistry we share with our pets. Dogs and people will work harder for an intermittent reward than one that comes every single time because release of the feel-good brain chemical dopamine is doubled in cases where a reward comes here and there instead of always. Thus, inconsistent responses to a dog’s jumping make the activity more intriguing. So how do you employ a consistent response that lets a dog know jumping is never going to be okay?

The four steps to cementing “Off” in a dog’s brain

There are four steps to getting a dog to stop jumping on people, including you.

1. When the dog jumps, say the word “Off.” Say it just once, and only once, no matter how much the dog keeps jumping. If you keep repeating the word, it means your dog has trained you to say something over and over and that what you say carries no meaning. Voila, your dog will have trained you to act like a parrot.

2. Turn to stone. If your dog is a 20-pound Cavalier King Charles spaniel, turning to stone means keeping your arms folded, your hands to your side, and your eyes averted. If she’s an 80-pound Lab and you’re a 110-pound woman, it means keeping a harness like a Gentle Leader on her and applying gentle, sustained pressure to the lead with a soft tug. That will activate pressure points on the nose and neck that the dog’s mother would have used when she picked her up by the nape of the neck as a puppy to let her know that she wanted her to stop doing whatever activity she was engaging in.

Note: Step 2 is the hardest part of training. It’s where all the patience comes in because it’s the part that requires the leap of faith that the dog will end up demonstrating the required behavior — not jumping. (It will finally happen. But it could take two or three minutes of ignoring and, if necessary, gently tugging on the head halter.)

4. You immediately proffer a dual-pronged reward: warm praise — “Good Girl! You did It!” — coupled with a treat to beat the band, perhaps a tiny bit of beef or chicken that you have with you because you knew the jumping was going to happen. (If you go to the fridge to get the treat, the dog will not be able to associate the food with her good behavior. She can’t sequence the meaning of the events the way you do.)

How long it is going to take?

If your dog has a history of jumping on people and not having her behavior corrected every single time, it’s going to take a bit before she gets it that jumping is not going to fly. How much? Perhaps as long as three weeks, if not longer.

Why so much time? Think about it. If jumping has led to you or other people repeatedly pushing her off (“What a great game!” she might think to herself) or to shouts or other calls for her to stop (“Wow — my owner is just as excited about this as I am!”), she has been trained to expect a reaction that generates a lot of excitement. And she’s not going to give that up overnight. In fact, it’s going to get worse before it starts to gets better, for at least several days.

Behaviorists call that pattern of upping the ante before giving up an extinction burst. As an analogy, consider how it is when you ring someone’s doorbell, almost certain the person is home. At first, you ring just once. But then there’s no response, so you ring again. Then, feeling anxious or a little desperate, you start increasing the frequency — ringing every 10 seconds instead of every 30. Only after you ramp up to ringing several times in a row with no time lapse — ding dong ding dong ding dong — and no one answers, do you accept that it’s not going to happen and give up. The circumstances have effectively led to your trying as hard as you could before suddenly extinguishing your efforts.

Somewhat ironically, the extinction burst will come faster if you have always let your dog jump on people rather than let her jump sometimes. She won’t have learned that it works intermittently and will get used to the new reality more quickly.

Either way, if you stick with it, the training will work. And isn’t breaking this habit worth a few weeks rather than dealing with a lifetime of having to apologize to people and getting them annoyed?