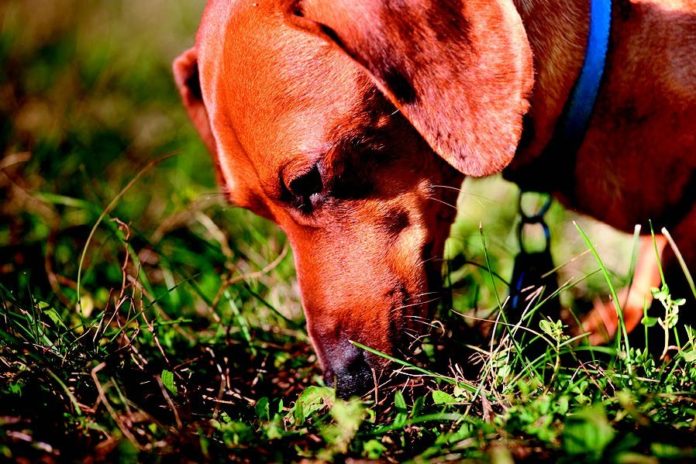 Imagine if you came across a headline like “World Peace Declared” or “Your Neighbor Threw a Block Party and You Weren’t Invited.” Then, just as you were getting to the juicy part, someone pulled your head away and you couldn’t learn the pertinent particulars. That’s just how it is for your dog when you yank her head away from a blade of grass that she has been sniffing for what seems like forever. Why? Because while we read our world largely with our eyes, dogs read that same world with their sense of smell.

By sniffing a spot for a while, they can learn what dogs (or other animals) have been there before them and what messages those dogs have left. For instance, the anal glands of a scared dog will emit an odor that indicates fear, letting your pet know there’s danger afoot — perhaps a coyote or a particularly aggressive dog. Or she picks up on parahydroxybenzoic acid, a pheromone in a dog’s vaginal secretions, as well as urine. “Ah, I know her,” your dog might think to herself. “Her owner gives me treats if I see her. I guess I won’t be getting any today; they’ve already been by.” And so on.

Dogs are particularly good at sorting out pheromone messages because they have something people don’t called the vomeronasal organ, or VNO. It’s kind of like a nose within a nose and works as follows. A dog sniffs, say, a lamppost and in a subtle move that most people miss, deposits some material from it onto the roof of her mouth. From there is goes into two ducts that lead to the VNO sensory endings. That’s how she gets the pheromone communication. It doesn’t really happen via traditional sniffing.

The VNO may be the reason dogs know to get so anxious as they approach the vet’s office. They could be “reading” a large number of chemical signals from dogs who have been there and have undergone handling by strangers, injections, and all kinds of unpleasant poking and prodding.

The reason dogs use their noses is to learn about their environment. Their olfactory sense is much more powerful than ours. Consider these differences:

-Dogs have nearly 20 times more primary smell receptors in their noses than we do.

-Dogs are able to detect smells at concentrations at least 100 times less than a person; in some cases, a million times less. (A dog can detect a human scent on a glass slide that has been lightly fingerprinted and left outside for two weeks. (There’s a reason we employ bomb-sniffing dogs.)

The bottom line: taking your dog for walks is not just about getting her to do her business. It’s about allowing her to explore her world, just the way you might stop to take a close look at something that hadn’t been there before — a sign on someone’s lawn from a paint company, making it clear that the peeling, chipping paint that has been an eyesore will finally be taken care of; a new car in someone’s driveway; and so on.

The next time she stops for what seems like forever, keep in mind that while it may make no sense to you, she’s on to something that your own senses likely won’t even perceive.