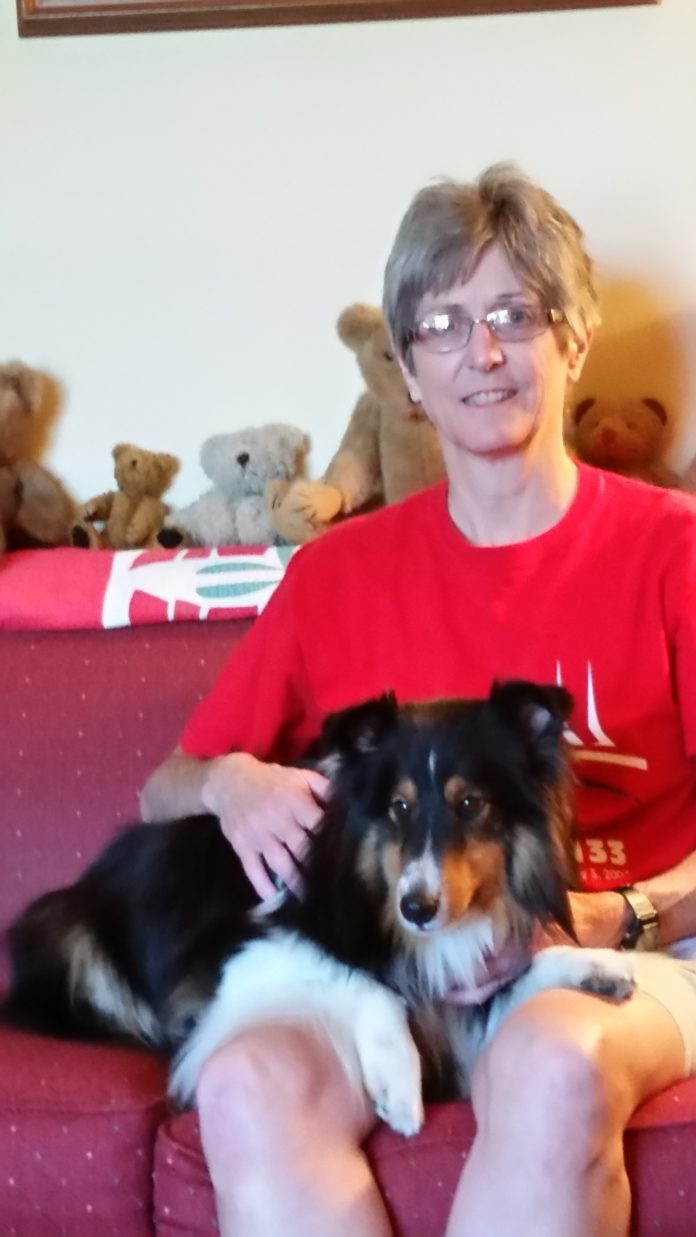 Kim Curtsinger has “ruined” her dog, she tells us. “My four year-old sheltie, Casey, is very timid around other dogs,” says the Nicholasville, Kentucky woman. “Unfortunately,” she adds, “I am the cause of this. I have a habit of scooping him up in my arms if we’re out walking and a loose dog approaches us. Sometimes I will yell ‘Get back’ at the loose dog if it is approaching slowly. Sadly, this has imprinted on Casey’s mind, and the sight of a dog bigger than he is sends him pulling away from the dog with his tail tucked between his legs.

“It has reached the point,” says Ms. Curtsinger, “that one of our walking routes is no longer available to us because there is a big dog who lives in a corner house and has an electric fence, so the dog is in the front yard a lot. Even though the dog doesn’t leave the yard, Casey is afraid of it and refuses to go that way. He used to enjoy walking at a local park but has recently seen a few larger dogs. While he will still go to the park, he won’t walk in the direction where he saw the big dogs. His territory for walking and enjoying the day has become more and more circumscribed. I am responsible for this growing fear, and don’t know how to fix it.”

Ms. Curtsinger doesn’t need to beat herself up. She has by no means “ruined” her pet. She has loved him and feared for him. Granted, in a caring but misguided manner, she may have sensitized him to large dogs. But she can unravel this problem with time and lots of patience — and perhaps some self-probing.

By which we mean, it’s possible that she is afraid of large dogs. After all, she never says that Casey started out afraid or that any large dog(s) attacked him and made him feel uptight, only that she has a habit of scooping him up if a large dog approaches. Also, she yells at loose dogs to get away if they are approaching slowly, but dogs generally approach slowly to express that they mean no harm.

If it is indeed her own fear at the root of Casey’s problem, Ms. Curtsinger is by no means alone. There are plenty of people who love their small- to medium-size dogs but are afraid of large ones. If you’re one of them, take heart in the fact that what you may have thought of as a bizarre quirk is not.

In the meantime, it sounds like perhaps Casey and Ms. Curtsinger could use some desensitizing.

A gentle desensitization approach
The way to go about desensitization is gradually — and in very small steps. For instance, if Ms. Curtsinger knows anybody with a large dog who is as gentle as a pussycat, she can arrange a “chance” meeting with that person and her dog on neutral territory — a sidewalk or path in her neighborhood that Casey does not fear. When the “surprise” meet-up occurs at the agreed-upon time, she should stay 10 to 20 feet away from the other owner and the big dog but speak in a happy voice and be very clear that she is glad to see them. She should also give Casey a delicious treat and throw one the other dog’s way. If Casey shows fear, she should step back five or 10 more feet, or end her conversation pleasantly and walk away. She should then try it again another day — and another and another. Eventually, Casey, seeing that she is okay with these encounters and enjoying the delectable goodies, should be able to get next to the other dog and enjoy the large-sized canine company.

Another technique that can work is to have the big calm dog walk on ahead of Casey and his owner, far enough ahead that both of them can stay calm. Over time, Ms. Curtsinger can close the distance as both people/dog pairs walk. When she and Casey reach the point that they are about 10 feet behind the big dog, they can veer out to the side and come up alongside the dog but with about eight to 10 feet between the two of them. They should continue to walk in parallel and gradually come closer and closer together. If at any point Casey becomes nervous and avoidant, she should increase the distance between the two dogs. With this approach as with the first, food can be used to sweeten the pot. Casey’s “mom” can make a positive association with the other dog by giving food treats and praising in a delighted voice.

Whichever approach Ms. Curtsinger uses, she should repeat the process with another big, gentle dog, then another, mixing up the places of the “chance” meetings over time. Eventually, both she and Casey will reach the point that they can go back to the park. She won’t feel the need to pick him up when she sees a big dog, and he won’t feel the need to be protected by her.

One note: Dogs stuck behind electric fences may act aggressively, barking and running back and forth in a way that seems less than friendly. It makes sense. They can’t get out without a painful shock, but anyone can get in. That is, they’re in no position to defend their turf or protect themselves. Being in that vulnerable position can understandably make them less than pleasant as people and other dogs walk by, even though they will usually not cross the electrified border and cause harm. The corner that has the dog behind an electric fence may be one Ms. Curstinger will need to keep avoiding.