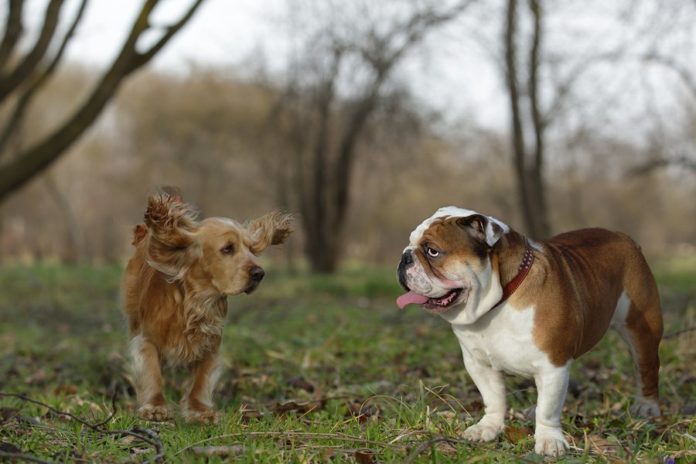 You bring home your brand new puppy somewhere between the ages of 8 and 10 weeks. She has already had her first set of vaccinations, but she has at least two more rounds to go, possibly three, depending on her breed and other circumstances, such as where you live and what pathogens might be in the environment. Some puppies don’t get all their needed vaccinations until they’re about 20 weeks of age — a full five months old.

With that in mind, it seems as though a puppy should not be exposed to others dogs until she is fully vaccinated. Why take any risks for contagious diseases that other canines might be carrying?

The thing is, a puppy’s sensitive period of learning during which she becomes accustomed to interacting with people and other dogs lasts through her twelfth week, or even the fourteenth, according to some behavioral researchers. And if you miss that window and wait until her very last vaccinations a month or two later to let her hang out with canine companions, she’ll be well past the optimal socialization period and may very well have developed a fear of other dogs that will be quite entrenched. Consider that even by the time a dog is eight weeks old, she is equivalent of about three or four years old in human age. You’d have a hard time living with an improperly socialized preschooler or child of grade school age — one who has never been around other children or even to the park. It’s the same with a dog.

It’s something of a catch-22. If you wait until your dog is fully vaccinated to introduce her to the great wide world, she’ll be disease-free but socially way behind the 8-ball. Introduce her to other dogs and animals out there before she has had all her vaccinations, however, and you will have helped her feel good about being around other creatures. But you’ll be playing Russian roulette with her health, running the risk that she will succumb to an infectious disease.

Is there a way around the dilemma? Yes.

Social and Safe
Fortunately, there’s only a small time period during which your new puppy might be at risk for conditions she has not been vaccinated against. Consider that until she is eight weeks old, she’s largely protected by maternal antibodies. And near the end of the socialization period, when she’s closer to 12 weeks of age, she will have had her second set of shots, and the protection it confers will have kicked in to a great extent by then. (The third set of shots confers even more protection, but the difference is not as great as from the first set of shots to the second.) What it means is that only during the period between the end of her mother’s antibody protection and the second set of shots — somewhere between weeks eight and 12 — is she at significantly increased risk for conditions she has not been vaccinated against.

During that time, with 10 weeks of age or so being the most critical, don’t take your new puppy to public places — parks or trails where other dogs and various animal species roam and where illness-causing organisms can travel from one animal to another. Your dog can become infected even by sniffing or touching the urine or feces of another animal. Instead, walk her on leash around the neighborhood, and make sure other dogs don’t come near unless you can confirm that they are up to date on their shots.

That doesn’t mean you should stop socializing your puppy during that interval, which constitutes a significant fraction of the socialization period. Instead, arrange puppy parties at your home with dogs whose owners you know and can vouch for their pets’ being up to date on their inoculations. That will insure that your own “baby” doesn’t get sick.

What does a puppy party look like? It’s small — perhaps only two to three canine visitors. And it’s not raucous — no lampshades on dogs’ heads. Instead, the dogs you invite over should be gentle, low-key types. That will let your little one know dogs are safe and good to be around. Once she has gotten the hang of it, she can graduate to more spirited get-togethers with new, perhaps more boisterous, canine friends.

You don’t have to worry about puppy parties with people, where friends and neighbors come over to pass around the new babe and pet and coo over her. Very few illnesses are zoonotic between people and dogs, meaning that bacteria and viruses that affect people are generally not a problem for our pets. They won’t cause cross-species harm.

The bottom line: yes, you do have to keep a new puppy at a safe distance from stranger dogs for a very short period of time — more or less her third month of life. And you need to have new dogs over then to keep your pup’s acclimatization to dogs from slipping backward. Do that, and your dog will reach her social best while avoiding unnecessary illness.