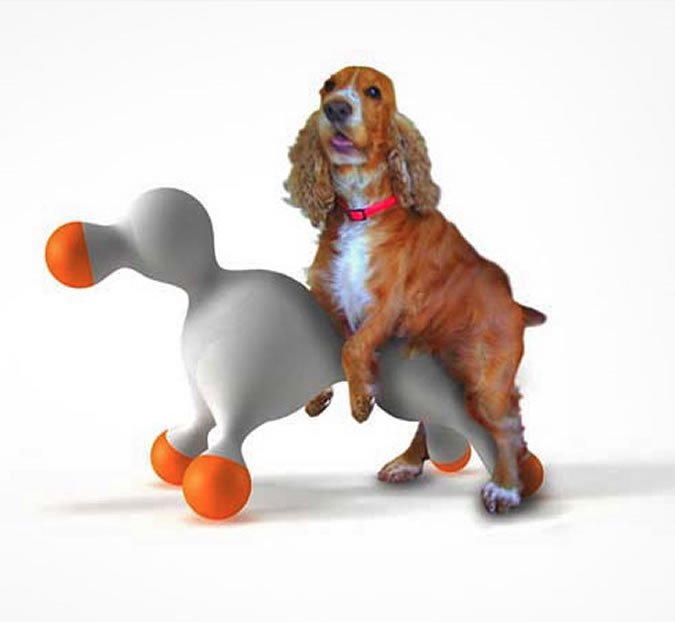 Eunice Davis of Norwalk, Connecticut, is concerned about her 8-year-old dog, Shadow. “When other dogs come to visit,” she says, “the first thing he does is try to hump” them. She is confused because he is neutered and wonders if it’s “a dominance thing” since it doesn’t matter if the visiting dog is male or female. “How can I change this behavior?” she wants to know.

Ms. Davis, join the confused club. So many dogs hump other dogs — boy on girl, boy on boy, girl on girl or boy — and so many owners are chagrined by their behavior and like you, scratch their heads either because the dog has been neutered or, as a female, did not start out with the anatomy one would assume to be a requirement for humping. What’s the deal?

It’s not only about altering a dog’s anatomy

In theory, neutering would completely eliminate the possibility of humping in a male dog because once castrated, his testosterone level falls to zero. But neutering doesn’t “shut off” the behavior in most dogs, and in a third of them, it won’t help diminish the behavior at all. Why not? It’s because even a dog without testicles is not an “it.” He remains a “he.” Masculinization occurs in utero due to small bursts of testosterone from fetal testes and remains as part of a male dog’s makeup.

Furthermore, being a he isn’t all there is to it, because the drive to hump isn’t all about qualities having to do with maleness—which is why you will also see female dogs engaging in the behavior.

A lot of dogs mount and or thrust against not only other dogs but also wadded up blankets and sometimes people. They learn it while they are still intact puppies and continue the behavior even after they are neutered —or spayed — because they have learned that it simply feels good. (Neutered males can still have erections and ejaculate just like intact males, explains the American Society for the Prevention of Cruelty to Animals, or ASPCA.)

But it’s absolutely not all about sexual urges, even though it certainly looks that way. Mounting and thrusting are part of normal play behavior, the ASPCA points out. Granted, dogs don’t usually display erections or ejaculate in the context of play, but the humping is still a way of interacting in a fun manner. Think of how some kids like to wrestle. In addition, some dogs who have been poorly socialized end up mounting other dogs in response to just an invitation to play. They become over-aroused because of lack of practice in interacting with other dogs, or interacting with them correctly, and it plays out in what looks like sexual (or dominance) behavior but isn’t.

Dogs also lose themselves in moments of stress or excitement. After meeting a new dog or person, for instance, an aroused and excited dog may mount another dog, his owner, or even a nearby object like a dog bed or a toy. He is trying to relieve, or work through, a highly charged, perhaps emotional response to a situation.

Of course, some dogs do mount others to display social status or exert control, which may be part of what’s going on with Eunice Davis’s dog Shadow. He may be telling the visiting dog, “this is my house.” Alternately, he may be confused about how to interact with the visitor and letting out his consternation. Ms. Davis reports that “he has not had much contact with other dogs.”

In some instances (although not Shadow’s), humping becomes a compulsive habit, especially if it’s a response to stress. In rare cases, the behavior becomes frequent and insistent enough to interfere with normal functioning.

Finally, humping can be a sign of a medical problem. Urinary tract infections, urinary incontinence, priapism (persistent, often painful erections) and skin allergies can all influence a dog’s mounting behavior.

Many people have a visceral negative reaction to seeing dogs hump. You see it in dog parks all the time — people yelling at their dog to stop or pulling their dog off another. They fear the dog is being impolite at best and making unwanted sexual advances at worst. They do not want to see it and feel embarrassed by it. But before you react strongly to a dog’s occasional humping (and yelling at a dog never really gets the job done right, anyway, no matter what the unwanted behavior is), consider the reaction of the other dog. Does she or he seem bothered by it? Is the other owner upset? If the answer to both of those questions is no, then perhaps the best solution is to allow nature to take its course and let the dogs be dogs. If there’s no chance of an unintended pregnancy and the humped dog seems fine about it, who is the behavior hurting? Remember, dogs’ sense of decorum is completely different from ours.

Of course, if the approached dog is snapping or seems unhappy about being mounted or the dog’s owner is unhappy about the situation for whatever reason (even if you think it’s not a good one), it is your job to get your dog to cease and desist.

How? Well, first of all, do rule out any health problem because that will require medical attention rather than behavioral treatment. Dogs who hump for medical reasons often spend a lot of time licking and chewing the genital area, says the ASPCA. If you notice your dog excessively mounting, licking or chewing himself, or rubbing his body against things, take him to a veterinarian to rule out (or in) a medical problem.

If you’re confident that the humping is not a sign of a medical issue and in whatever context is deemed socially unacceptable, here’s what you need to do:

Train your dog by saying “Off” or “Stop it” when he engages in that behavior and rewarding him with a delectable treat when he complies. Since dogs tend to go on automatic when they hump, make sure it’s a really great treat that will have the best chance of redirecting his attention, a morsel of beef or something else that he usually doesn’t get under any other circumstances. He’ll have the drill down after a bit.

Sometimes, a dog will give a sign that he’s about to get, shall we say, frisky. He’ll sidle up to something or someone or some dog and start to pant, lick, whine, paw, or rub against the intended entity before mounting and humping. If you can catch any of these warning signs, distract him ahead of time. Toss a toy, give your pet a treat, or ask him to perform a trick that he knows he’s good at and that will be rewarded. Also, casually get between him and his “intended.”

Make sure your dog gets plenty of physical activity and that you give him plenty of attention. A dog who exerts himself engaging in lots of walks and perhaps taking classes in agility or fly-ball — and who gets a lot of attention from his owner — is a lot less likely to feel stressed or anxious and start acting on impulses to relieve overflowing tension.

Do not start yelling at your dog and putting on a show when he humps. Dogs like attention, even negative attention, and if humping is a way to get yours, your strong reaction to his humping will prove to be positive reinforcement for the behavior. Firm is good; histrionics are not. Remain calm, even if you have to fight your natural inclination in order to do so.

Of course, if your dog has not been neutered (or spayed), removing the testicles or ovaries is often a good way to decrease the behavior — and sometimes do away with it completely. Note that many female dogs who hump do it only when they are in heat or when another female is in heat. If that’s the case, spaying has a very good chance of ending the behavior.