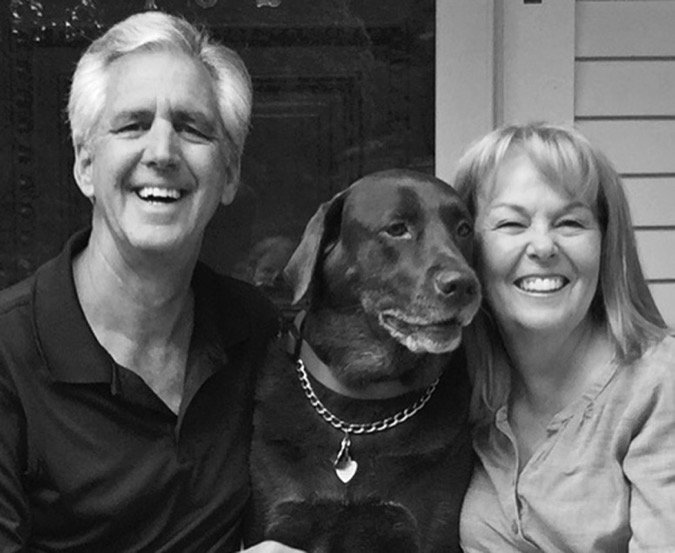 Tom Hughes, who lives with his wife, Penni, in the big yellow house with the wraparound porch at the top of our street, had a motto: “One wife, one child [Katie], one dog.”

That dog was Daisy, a smallish (and somewhat cranky, if you ask me) chocolate Lab with whom Tom was completely besotted. He always said that when Daisy went, that was going to be it because no other dog could compare.

Then Daisy died. She was old — it wasn’t a shock. But it was very, very sad, and Tom kept true to his word about not getting another dog — for four days. “Can you find the number of the farmer where we got Daisy?” he asked Penni.

She had already located it, knowing the request would be coming. Penni had grown up around dogs. Her mother was a breeder, so she was used to the cycle of life, and the fact that dogs go through their cycles much faster than we do.

Still, why do we put ourselves through it, not just once but over and over: the built-in grief that comes with getting a dog, the knowledge that in all likelihood, that dog is going to go ahead of us? To make our gluttony for punishment all the more puzzling, Penni points out they’re really difficult until they’re at least a year or a year and a half, “like toddlers,” as she puts it. She once had to wrap plastic around the legs of her piano because a dog she had kept chewing the wood. And then they’re often really difficult in a different way toward the end, when they’re not doing well and you walk around with your heart in your throat.

You already know the answer. It’s the love — that unbelievable love between a person and a dog that’s different, and in certain ways more pure, than any other kind of love. That’s certainly why Tom and Penni went on to get Belle, a delightful (if you ask me) chocolate Lab who’s only too happy to say hello and exchange pleasant sniffs with my canine “kids,” Franklin and Rosie.

Belle has been with the Hughes for a while now. She is already eight, while Franklin has turned nine. Even little Rosie has passed her sixth birthday. It all goes so fast.

It’s not good to grieve ahead of time; that’s just a waste of all that’s good about the here-and-now. But when the grieving does come, what’s the best way to get through it? Should you share or go it alone because people — even other dog owners — don’t really get it? The article beginning on page 1 has some elucidating ways to think about it.