People show their emotions with facial expressions all the time, even if they’re alone. It’s involuntary. Not so dogs. Particular facial expressions they make are intentional and occur only when you make eye contact with them. That is, they’re more than shows of emotion. They’re forms of communication.

Researchers at England’s University of Portsmouth made the point when they video-recorded 24 dogs’ reactions to humans facing them, facing away, providing a treat, or not. The recordings revealed that the dogs were most likely to use facial expressions not in reaction to being fed but when humans were looking at them. Sometimes they showed their tongues (presumably to communicate happiness) but more often they raised their inner eyebrows. When the inner eyebrows are raised, a dog looks not only sad but also more infantile, more in need of help, because it makes his eyes look bigger.

The bottom line: when you look at your dog and he looks back longingly or searchingly with those big beautiful eyes or perhaps his tongue showing, he’s not simply letting you know that he’s feeling something. He’s communicating, perhaps along the line of “Pay attention to me. I feel vulnerable and need reassurance.” 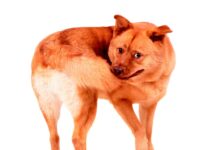 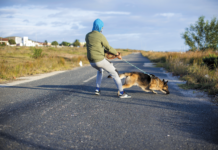