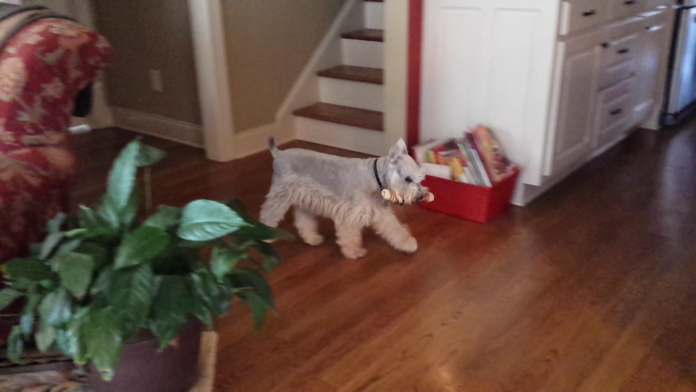 On the face of it, it sounds like the most unique canine behavior in the world. A dog starts “licking” the air out of nowhere, or carrying an object in his mouth while whimpering the whole time. Or maybe he begins carrying food from one room to another before he eats it, or falling to the floor and flopping around like a just-caught fish thrown to the bottom of the boat. Guess what? If your dog does it, chances are others do as well.

Head of the Tufts Animal Behavior Clinic, Nicholas Dodman, BVMS, DACVB, has seen it all. Herewith, some of the behaviors owners think are unique to their dog but aren’t — and when to know if the behavior is just a harmless quirk or has a serious medical component that needs to be addressed for your pet’s health.

Moaning even though he already has the toy in his mouth. You’d think if a dog had possession of something he valued greatly, he’d be happy. Yet some dogs literally fret even as they walk around with the very thing that means so much to them. Earl Duckett of Loganville, Georgia, knows the behavior well. His 11-year-old miniature schnauzer, Toby, has started carrying his wife’s bedroom shoe in his mouth, whining while he does it. “The whine is like he is hurting,” Mr. Duckett says, “but there is no indication that he is, and he only whines when he walks around with it. This happens two or three times a week. Last Christmas, our neighbor gave him a rawhide chew, and he did the same thing with that. He has never chewed on either — he just holds them.”

Dr. Dodman can relate. His own dog Rusty’s “object of frustration,” as he calls it, is a ball about the size of a tennis ball but softer. “Sometimes,” Dr. Dodman says, “the ball rolls under the couch and is gone for a few weeks and Rusty forgets about it. Other times he squeezes it as he walks around with it, worried and whining all the while.” What’s the deal with dogs like Toby and Rusty?

Because the object is so valuable to the dog, Dr. Dodman says, “I imagine his concern is about the possibility of someone taking it away from him. If a dog were out in nature, he would bury an object that means so much to him. So he’s probably walking around thinking, ‘Gee, I wish there were some place to hide this thing. I’d like to squirrel it away.'”

The solution: if there’s an object that’s so emotionally powerful for a dog, Dr. Dodman suggests, consider hiding it so he’s not spending any time worriedly mourning the loss of something that he has not in fact lost. “No need to rip it out of his mouth,” Dr. Dodman says. That in fact will only reinforce to him that he can and will lose that which means so much to him. But if you put it away while he’s occupied with something else or out of the house, chances are he won’t pine over it.

Fish tailing. A client was once referred to Dr. Dodman because, she said, her dog was fish tailing. “‘He falls on the floor,'” she told him, “‘like a fish you catch and throw in the bottom of the boat, and goes flippity flop.'” The client had been sent by her own veterinarian to a neurologist, who put the dog on phenobarbital — a potent anti-convulsant. But the neurologist suggested the woman take her dog to Dr. Dodman to see whether the condition might be strictly behavioral rather than neurologic. It was.

“I told her to ignore the behavior when her dog exhibited it,” Dr. Dodman relates, “and also to make a ‘bridge’ between paying attention to the dog and not paying any attention at all. This is called a bridging stimulus, letting the dog know you are about to withdraw attention, and in this case it was a duck call. Within a week, the dog’s fish tailing was down 50 percent, in two weeks, 75 percent, and in three weeks, completely resolved.”

Sometimes, Dr. Dodman says, dogs engage in attention-seeking behavior that has no rhyme or reason other than to make owners pay attention. It could be fish tailing or some other odd thing. When it’s ignored, at first it might get worse. The dog is thinking, ‘Gee, it has always worked before. I guess I have to try harder.’ The upswing in behavior is called an extinction burst. Then it gets better as the dog comes to realize that it’s no longer going to have an impact.

Taking food from his bowl and going into another room to eat it. “A lot of dogs have weird behaviors in relation to food,” Dr. Dodman says. “Some dogs sneak up on it, almost stalking the food and then hovering before digging in. It’s as if they’re kind of suspicious of their kibble. Others may be worried someone will take it from them — those are the ones who might grab some food from the bowl and steal it away to what they consider is a safer spot where they can slobber all over it in private — perhaps your expensive rug in the living room.

Digging fast and furiously in the dirt — or the bed linens. This action is often derived from aspects of the so-called appetitive phase of predatory behavior, Dr. Dodman remarks. Consider terriers, who were bred to chase small varmints. The varmint, after running some, might burrow into the ground, and it was the dog’s job to dig into the dirt and pursue it. When there aren’t any true predatory outlets, terriers might displace those aspects of inbred behavior with behavior that appears pointless in order to work through the instinct — digging in leaves, perhaps, or in some heaped-up bedclothes.

It should be noted that not all dogs dig for predatory reasons. A northern breed like a Siberian husky might dig to simulate what he does in the harsh terrain of a polar region — making a depression in the snow to shield himself from ice-cold wind blowing 70 miles an hour. Conversely, on a very hot day, a dog might dig in the ground and lie in the cool soil to shield himself from the sun. That is, digging could be a vestige of thermo-regulatory behavior. Whatever it is, there’s probably a reason for it that was bred into the dog eons ago.