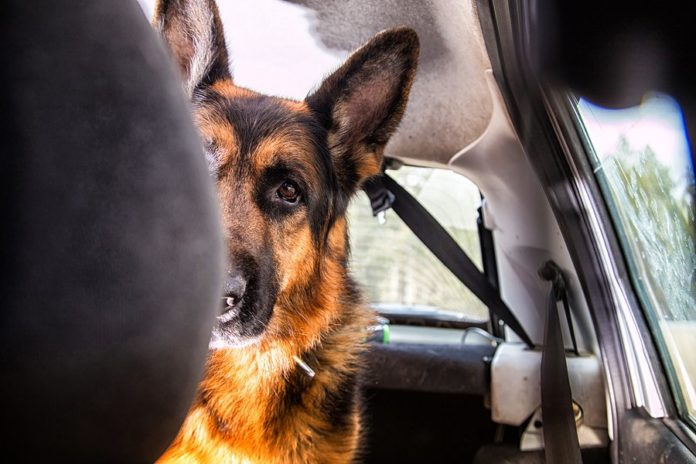 Frances Fineberg of Oviedo, Florida, is worried for her two-year-old golden retriever, Amos, and for good reason. He hates going in the car, but the Fineberg family is about to take him on a vacation that involves an 8-hour road trip. They can’t board him while they are away because he is a service dog. Ms. Fineberg believes it’s not the heat of the car that’s causing the problem.

“Because it does get hot here in Florida,” she says, “we always use the air conditioning in the car and make sure it is directed to the back seat as well as the front seats so Amos will be comfortable, too. But the moment he gets inside he starts panting quite heavily until he gets out of the car. We will open the window for him and he will put his head out for a minute or so, but then quickly reverts to his panting. I am dreading the trip. I feel terrible hearing him panting like that. It was suggested I do a trial run and give him some Benadryl. Is that a good idea?” she asks.

Ms. Fineberg, we certainly understand your quandary. It’s made more difficult by the fact that Amos’s panting in the car could be due to a number of different causes.

Don’t automatically assume it can’t be the heat just because you put on the AC and direct it toward the back seat. It may be that the cold air is not cranked high enough. Consider that “except for our clothing, we are naked,” says Tufts veterinary pain specialist Alicia Karas, DVM. By which she means any skin that is exposed can perspire, letting off heat and lowering the surface temperature all over our bodies. Dogs can perspire, and subsequently cool evaporatively, only through their tongues, nasal passages, and paw pads. Add to that the fact that wherever they go, including a hot car, they are essentially wearing a parka, as Dr. Karas puts it.

So the level of AC that works for you might not be enough for your pet. If that’s the case, you may have to wear a sweater in the car, and perhaps even gloves, to get the air conditioning to a level that will make him comfortable.

It’s not that big a deal, really. If your dog is comfortable and you can be kept warm enough with an extra layer, what’s the harm? (A lot of dogs seem to prefer fans to air conditioning, Dr. Karas has observed, happily sitting right in front of them. A fan will essentially push hot air off a dog. Of course, it’s not really an option for the car.)

But to tell you the truth, we kind of suspect that Amos’s issue might not be feeling too hot, since the panting begins the moment he gets into the car (although he may start panting in anticipation of becoming overheated). If it’s not the heat that’s getting the better of him, what else might it be?

Some dogs become nauseated in the car, causing them to feel very uncomfortable and upset while on rides. But that’s not the likely scenario for Amos, either. Most dogs grow out of motion sickness, an inner ear issue that leads to nausea, when they grow out of puppyhood. The vestibular system, of which the inner ear is a part, lags a little in maturation but then catches up. Also, you’re not describing vomiting or drooling — signs of a dog feeling sick to his stomach.

Still, not every dog grows out of motion sickness, and not all dogs exhibit it in the same way. If motion sickness does turn out to be the problem, there are over-the-counter anti-nausea medications like Dramamine (dimenhydrinate) and meclizine (sold under a number of different brand names). Antihistamines like diphenhydramine (the Benadryl you mention in your question) can also come in handy. Prescription drugs for car sickness include Cerenia (maropitant citrate).

Your vet really has to be in on the decision. Different dogs have different health profiles that make one or another medicine better for controlling car sickness. Some dogs, just like some people, even have a paradoxical reaction to Benadryl and end up wanting to climb the walls rather than feeling calmed while taking it. Thus, the trial run you mention would definitely be a good idea if Benadryl is decided on. You don’t want to have to peel your dog off the car ceiling over the course of an 8-hour ride.

The third reason for a dog’s having a hard time in the car is anxiety. And it’s a definite possibility here. After separation anxiety, car anxiety is one of the most common emotion-based problems of dogs, particularly young dogs like Amos.

The etiology of car anxiety is different for different dogs. For some, it’s a bad experience inside a vehicle that sensitized them to all vehicles. For others, it’s being vanned a long distance immediately after being separated from mother and littermates and taken to a new home for adoption. The problem can be so intense that sometimes it causes the same symptoms as motion sickness — drooling and lip-licking, both signs of stress.

Some of the same drugs used for motion sickness may also help reduce stress for dogs who have anxiety about being in the car, including Benadryl. There are a number of others, too, including the anti-anxiety medications alprazolam (Xanax) and clonidine (Catapres). Some veterinarians work with clients in deciding among certain over-the-counter preprations, Dr. Karas, says, such as valerian, chamomile, and melatonin. In some cases, a Thundershirt that “swaddles” the dog helps him to feel calm, too.

Stress in the car can also be reduced by gradual desensitization. That might entail feeding Amos his favorite food or playing with his favorite toy next to the car without going in it — or even just petting and cooing over him outside the car. After doing this several times, when he seems more comfortable, you can graduate to putting favorite toys or foods on the floor of the car. And so on.

With patience, and sometimes with medication, just about all dogs get to where they need to be when it comes to going in the car, which is to say they become okay with it. But for Amos’s sake, it would be best to take him to his veterinarian before embarking on your road trip so the doctor can help you sort out what the real issue is. If your vet can’t suss it out with you, she may recommend a veterinary behaviorist. One way or another, a solution is at hand.

Good luck with Amos, and please let us know what the problem is and how you solve it so we can follow up.