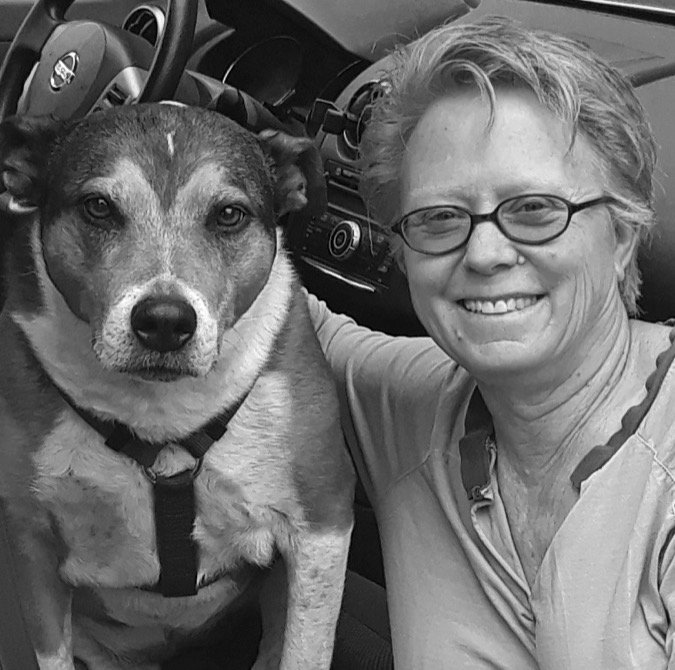 In the noblest of gestures, Peggy Brodsky and her ex have come together for the sake of the dog.

After the two broke up, Ms. Brodsky moved from Albuquerque to Portland, Oregon, to be closer to her daughter and grandchildren. The wrinkle in the relocation was that she needed to find a rental situation that would allow her to keep her two dogs, mixed breeds Violet and Sen. Fortunately, that seemed to get smoothed out because she scoped out a landlady who was willing to take in all three of them. But then the landlady decided she didn’t want a housemate after all, and while scrambling to find new accommodations for herself, Ms. Brodsky realized that finding another place that would allow two dogs was going to be too difficult.

That’s where the noble compassion comes in. Her ex now lives in Chicago — the two really are over — but they worked out a solution. The ex is willing to take one of the dogs, Sen, who makes a more logical choice for the move. She has lived in big cities before, and she’s more used to cats than Violet, and the ex has cats. But the two have to figure out how to make the transfer. Ms. Brodsky had been planning to ship Sen by air and wanted to know if the dog should be sedated during the plane ride.

Ms. Brodsky, there’s a lot more than sedation to consider.

What flying as cargo means to a dog

Sometimes, there simply is no choice but to put a dog in the belly of a plane to get her from point A to point B. Either the dog is too big to ride in the passenger cabin (as is Sen), or the dog’s owner is not going where the dog is going, so the dog has to be shipped by herself (again, as is the case with Sen). Those exigencies aside, the Humane Society of the United States says that “we strongly discourage having your pet travel by air in the cargo hold of a plane. It can be dangerous and stressful.” The society recommends that people who have to get their dogs from one place to another “consider all alternatives to flying.”

Why? If there’s a delay and the dog is stuck in the belly of the plane on the tarmac or some other holding area, the temperature may become too hot or too cold for her well-being. Keep in mind that a plane’s temperature and air pressure controls are often powered down while it is on the ground. (Ever notice how much more comfortable you get, how much more air there seems be, once the plane takes off?) Lots more time passing than originally thought before a dog reaches her destination also increases her risk of becoming extremely thirsty or hungry.

And for some dogs, the emotional stress can be overwhelming. Dogs don’t have a clue what is going on. They don’t know they are flying, as there are no windows in the cargo hold. All they know is that they are being put in a container and handled by strangers and that at some point it kind of feels as though they are moving and, during any turbulence, shaking about. These are all new experiences that can prove very unsettling, especially for a dog who is anxious to begin with.

That’s why the Humane Society of the United States advises vacationers, in particular, to leave their dogs at home with a dog sitter rather than take them along, reminding people that dogs often have to be left in hotel rooms, anyway, and do not get to participate in the vacation experience in the same way as a family’s human members. That is, while you may want your dog with you because you feel so strongly that she is part of the family unit, she will be happier and less anxious if left behind.

But okay, sometimes, as in Ms. Brodsky’s case, there is no choice but to put a dog on a plane. In such cases, what do you need to know? Should a flying dog be tranquilized? What else needs to be considered?

To sedate or not, and other decisions

It might seem like sedating a dog being shipped with the rest of a plane’s cargo is a great idea. It would take the edge off any anxiety and sort of keep the pet drowsy through the ordeal. But the American Veterinary Medical Association strongly recommends against it. Tranquilizers can potentially increase the risk of heart and respiratory problems, and furthermore, a sedated dog may not be able to properly brace and prevent injury if the crate moves around in flight, say, during a bout of turbulence. (Think of how you tighten your body in turbulence.) Indeed, some airlines may require a signed statement that your dog has not been tranquilized prior to flying, while others will not allow the dog on the plane if she even appears sedated.

Here are some other things to keep in mind:

The Humane Society of the United States recommends giving your dog at least a month to get used to the travel carrier in which she will be flying. Leave it open and in an area of the house she frequents so being in and near it becomes second nature to her. When it is time to fly, include some items with familiar scents that will comfort her. But avoid thick blankets or fluffy towels or clothing she can wrap herself in or get her nose stuck in, says the American Veterinary Medical Association, because that can increase her chances for breathing difficulties during flight. This is particularly advised when stowing brachycephalic (short-nosed) dogs, who are more vulnerable than other dogs to breathing difficulties during flight (see sidebar, left).

Most, if not all, airlines will require a Certificate of Veterinary Inspection issued within 10 days of the plane’s taking off, especially if the flight takes your dog across state lines. It must show that your pet has met various physical health criteria and is up to date on vaccinations. If your dog has an underlying medical condition or is elderly, the risk of putting her in with the cargo increases.

You should try to book a nonstop flight. That decreases the potential for delays and other snafus that could keep your pet uncomfortable for longer than necessary.

In warm weather, choose an early morning or late evening flight to avoid the possibility that your dog will end up on the tarmac or in the plane’s hold during the hottest part of the day, suggests the American Veterinary Medical Association. In cold weather, the association says, choose midday flights to avoid the low temperatures of early morning and nighttime.

Note that if an airline cannot guarantee that your dog will not be in temperatures lower than 45 degrees Fahrenheit for more than 45 minutes when she is being moved from the terminal to the plane, or for more than four hours when placed in a holding facility, it will not let her fly. They also will not ship your pet if the temperature will go higher than 85 degrees for the same amounts of time in those situations. Some airlines will wave the lower temperature rule if you get an acclimation certificate from your veterinarian saying your dog is healthy enough to withstand the colder temperatures without risk of bodily harm. But an acclimation certificate will not circumvent the 85-degree rule, as that would be flouting the requirements of the Animal Welfare Act. It’s for that reason that airports like the one in Phoenix, Arizona, frequently have days during the warm-weather months when dogs are embargoed.

These considerations are not meant to scare you. Yes, there are deaths associated with airline flights. But of the many hundreds of thousands of dogs who fly in the belly of a plane each year, only about 20 die — a truly minuscule fraction; the odds are very much with you should you need to transport your pet by air. But we tell you this because having a pet fly as cargo puts her through a very stressful ordeal, often for many hours, during which she cannot be comforted. So if you can possibly avoid it, that’s a better way to go.

As of this writing, Ms. Brodsky and her ex-partner were considering each driving halfway between Portland and Chicago for Sen to change hands. Laramie, Wyoming, sounds pretty good about now.

If a dog is short-nosed, flying her in a plane’s hold may be out of the question.

In 2010, the U.S. Department of Transportation released statistics that showed brachycephalic dogs — those with short noses — are more likely to die on planes than dogs with normal-length muzzles. The risk of death for any dog on a plane is very, very low, but in a five-year study, about half the 122 dog deaths associated with air travel involved breeds with short faces. Twenty-five of the pets were English bulldogs while 11 were pugs. Other short-nosed breeds include French bulldogs, Boston Terriers, boxers, some mastiffs, Pekingese, Lhasa apsos, and shih tzus.

Why are they more prone to injury, and worse? It’s about the breathing. The American Veterinary Medical Association explains that although brachycephalic breeds have shortened noses, “they still have to pack all of the same anatomical structures in there that dogs with longer snouts do….It’s sort of like moving from a house to an apartment and having to put the same amount of furniture in the apartment — it’s all there, but it can be a bit cramped. The situation is worsened if the dog is overweight or obese.”

As a result of the tighter space, the association explains, short-nosed dogs are “prone to problems such as smaller-than-normal nostrils, a longer-than-normal soft palate, and a narrowed trachea (or windpipe). Because of these abnormalities, they don’t breathe as efficiently as dogs with normal-length snouts and can have difficulty cooling off when they’re playing or exercising, or if they’re stressed or overheated. And when they’re stressed, their airway can actually collapse (either partially or completely) and cut off their airflow. It’s like breathing through a straw — if you gently suck through the straw, there’s no problem getting air. But when you really try to suck hard through the straw, similar to what these dogs may do when they’re stressed [in an airplane cargo hold], or exercising or overheating, the straw collapses and you don’t get air. This doesn’t always cause death, but it can cut off the oxygen supply temporarily and cause such dogs to collapse or overheat.” Short-nosed breeds seem particularly vulnerable to changes in air quality and temperature in the cargo hold of a plane, the association says. And there’s no one there to monitor them during this vulnerable time.

If you’re on the fence about putting a short-nosed dog into the belly of a plane, the airlines themselves may make the decision for you. Some of the larger airlines simply do not accept brachycephalic dogs to be stowed underneath the passenger section with checked luggage. One of them is Delta, which lists 10 breeds as off-limits in the cargo section of its planes, including not just pugs and bulldogs but also Affenpinschers, boxers, chow chows, and Japanese chins. United doesn’t allow short-nosed breeds in the hold From May 15th through September 15th.