Home DOG TRAINING AND BEHAVIOR Ways for Coping With a Dog Whos Hard-Wired to Go After Other...
Print
Email
Facebook
Twitter 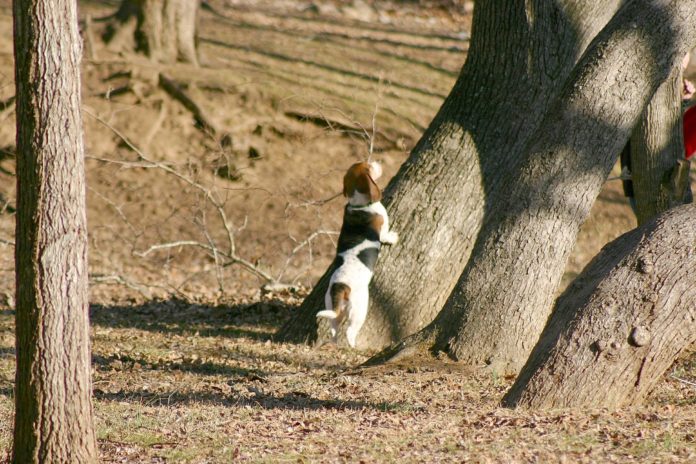 Joan Gullet’s Old English Bulldog, JuJu, was raised with two kittens when she was a puppy. “They got along great,” says Ms. Gullet, of Victoria, Texas. But something has changed for JuJu, now seven.

“A year ago, I was walking her,” Ms. Gullet reports, “and we came upon a sleeping cat in a neighbor’s yard. JuJu lunged toward it, grabbed it by the throat, flipped it on its back, and killed it. The cat did not have a chance with JuJu’s massive bite and body — she weighs 76 pounds. Since then, I can’t take her for a walk without her attacking every cat she sees.

“She has so far killed two cats and maimed at least three. She actually searches for them by looking under vehicles on the street and in driveways. She is just the right height to see under vehicles; it’s not like she has to squat down to see them.

“It’s not just cats. She has killed five rats, three birds, two squirrels, and one possum. For a chubby girl, she is quick and agile. I stopped walking her because of this. She lunges so hard on the leash that she pulls me with her.

“I hate this because she loves to walk, and she needs the exercise. She has always done all her ‘business’ in our backyard, so that’s not the problem. But when I don’t walk her, she screams (yes, she actually screams) and wales incessantly.

“JuJu has always been the most affectionate, perfect dog you could want in every way. What happened? How can this be corrected? I thank God she is sweet to all human beings and to all other dogs.”

Ms. Gullet, predatory behavior like the kind JuJu is exhibiting is most definitely a problem that has to be addressed. And while it’s nearly impossible to root a predatory instinct out of a dog, there’s much you can do to make walks with her safer and thereby get her the exercise she needs.

All dogs have a very high predatory drive. Long before they were fed in our kitchens, they needed that drive for food. Consider that dogs evolved as crepuscular animals — able to see best at dawn and dusk — so they could spot little grey and brown varmints in the shadowy beginning and end to each day, and then stealthily pounce on those small rodents for sustenance.

But some dogs have a particularly strong drive to go after prey. We’re not talking about the squirrel-chasing types; that’s garden variety canine prey drive. We’re talking about a genetically hardwired propensity that’s so intense it’s immutable, one evidenced by a dog who goes crazy chasing other animals or perhaps was bred to hunt. In such cases, even newborn babies may be at risk in the household.

Consider that almost always, dogs know who belongs in the house and who doesn’t. But a dog with a super-high prey drive may not recognize a newborn as a full-fledged member of the family in the first month after the baby comes home from the hospital. It mistakenly identifies the crying little one as wounded prey, with the high-pitched sounds and the flailing arms and legs being the sources of confusion.

The result can prove fatal (which is why dogs should never be left alone with a newly arrived infant, for the first month at least). A super-predatory dog is not acting out of sport or anger. She’s just responding to a primal urge — like JuJu.

Why JuJu’s about-face on cats?

Good that JuJu doesn’t seem to want to go after people — or other dogs. But why did she get along with two kittens in the household as a puppy and start going after cats — and other small animals — as an adult dog?

“Socializing a highly predatory dog to cats while she is a puppy may help the dog understand that the cats are not to be attacked, but the dog may only make an exception for the cats that she knows,” says Tufts animal behaviorist Stephanie Borns-Weil, DVM. The predatory drive tends to be so fixed that all the early socialization in the world may not translate to small creatures outdoors. “The predatory aggression is triggered by a moving animal,” Dr. Borns-Weil says. Outside, in the “wild” of your neighborhood, that inborn nature to react to the movement of cats and other small animals becomes unleashed, so to speak.

Giving JuJu opportunities to exercise her predatory behavior in a safe context may help decrease her drive. There are a few canine “sports” that allow dogs to revel in their natural hunting abilities. In Barn Hunt, for instance, dogs have the opportunity to hunt hidden rats safely enclosed in dog-proof enclosures (although it’s still not great for the rats). And dogs can exercise their scenting abilities in Nose Works recreational scent tracking competitions.

It’s impossible to say why JuJu did not start to exhibit extreme predatory behavior until about a year ago, when she was already six years old.Something may have triggered her that even the most loving, attentive owner could remain unaware of. And, truth be told, if she spent time alone in the yard, she may have had multiple experiences prior to the first known incident with the cat.

Whatever the reason for the switch in her behavior, it’s too dangerous to try to ease her out of her proclivity while putting other pets, and feral animals, at risk. But Juju can still have her walks. You just need to fit her with a basket muzzle. That way, no matter how close she gets to another animal while lunging, she won’t be able to do any harm.

She’ll also lunge a lot less if you control her walking with a harness rather than just a neck collar, which gives her a greater chance to control your movements rather than vice versa. (See Harnessing Your Wayward Dog starting on page 10 of the April 2018 issue for good harness options.) It can help, too, to work on a “leave it” command using very high-value treats so that she will more readily interrupt the chase.

An unfortunate result of Juju’s being in a basket muzzle is that many people who might have normally come up to pet her or let her interact with their own dog are going to give her wide berth. But a vest saying, “I’m friendly but chase small animals” can help let them know JuJu is not aggressive. And she’ll get the exercise she so craves.