Home DOG TRAINING AND BEHAVIOR We Have Met The Enemy, and It Is Skateboards
Print
Email
Facebook
Twitter 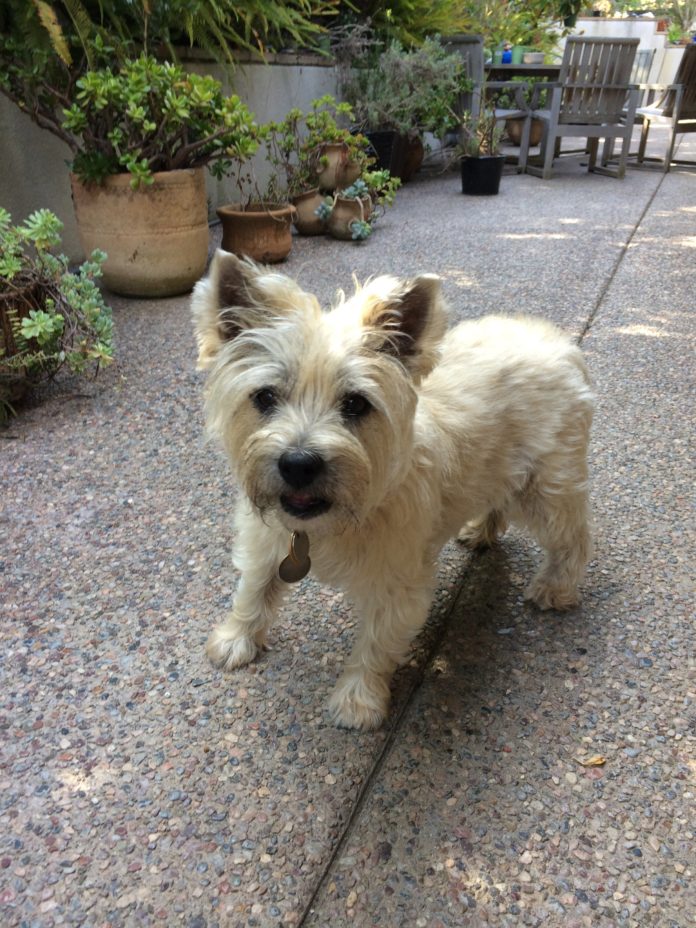 “My cairn terrier, Charlie, ALWAYS angrily barks at and attempts to ATTACK moving skateboarders,” writes Barry Jagoda of La Jolla, California, a bustling suburb of San Diego. “He doesn’t go after anything else in our busy area — not buses, cars, motorcycles, bicycles, or other dogs (well, perhaps some really big ones, in addition to neighborhood cats and skunks from the nearby canyons). In Charlie’s previous residence in staid Georgetown, Washington, DC, skateboards were not much of a problem. But we now live around the corner from the University of California, San Diego, so it has become an issue.

“I don’t understand it,” Mr. Jagoda says. “Charlie is walked on leash twice daily for a total of more than a mile and is otherwise entirely calm and well-mannered. Why would a terrier be so frightened of or angry at a passing skateboard?”

Normally, Dr. Dodman comments, he would chalk it up to the dog’s prey drive. “A cairn is basically a fawn-colored West Highland White,” he says. “The two of them are kissing cousins. And I spent a lot of time dealing with West Highland Whites during my time up in Scotland,” the British doctor continues. “They are feisty, like Scotsmen themselves. They remind me of Willie, the red-haired custodian on The Simpsons: bristly and proud.

“Cairns are the same way. Furthermore, as terriers, they have this rodent-chasing potential. All terriers were originally bred for purposes along those lines, and the instinct is still in them. They like to chase down furry varmints and kill them.

“So you could hypothesize that Charlie’s prey drive is dyslexing onto this fast-moving object, and he’s chasing it down like a prey facsimile. But the conundrum is that such an explanation would involve more than just singling out skateboards. A lot of dogs might chase skateboards, but they would also chase other things, dyslexing their high prey drive onto inanimate moving objects in general. So what could be going on?”

A possible explanation for singling out skateboards
“A few years ago, I happened to see in an office consult a dog with a similar skateboard problem,” Dr. Dodman says. “This dog normally showed no aggression at all. It was more a Labrador type than a terrier, which made it a sporting breed without the powerfully predatory, biting instincts of a pure hunting or terrier breed.

“It turned out he had fear aggression. The owner lived next to a school, and all the kids were skateboarding. When the kids were coming along on their boards, he continually had to step out of the way, down a drive. And that became his weakness — noisy, scary children, especially boys, on wheels.

“I wonder if Charlie had some event with a skateboarder in the past that scared him — maybe a child on a skateboard came too close. That, combined with his innate feistiness, could be what’s causing the reaction, since there’s no overarching explanation that speaks strictly to Charlie’s predatory instinct. For whatever reason, he’s determined to see only skateboarders off. And every time he sees one, it reinforces his response because, after all, his aggression has the desired effect. The skateboarder does leave, right?”

Solutions to the problem
Mr. Jagoda, Charlie’s skateboard story has a high probability of a happy ending, if you can make a prediction based on the experience of the Lab who came to see Dr. Dodman because of his skateboard problem. “I first saw the dog and his owner three years ago,” Dr. Dodman says, “and the dog is now 95 percent better. Admittedly, a lot of that is attributable to the fact that the woman now keeps her dog inside while skateboarders are about. That is, she uses avoidance, which is not a cop-out. It’s a very acceptable, judicious way to go when it’s an option.” But even when the dog now sees a skateboarder, his owner would rate his improvement at 60 percent because of the steps Dr. Dodman helped her put in place.

– Walk the dog on a head halter such as a Gentle Leader rather than just clip a leash to a collar around his neck. “The Gentle Leader constitutes a powerful control system when used correctly,” Dr. Dodman says. When Charlie sees a skateboarder and is about to go berserk, calmly but firmly give a verbal instruction like “Leave it” and then apply steady, upward tension until Charlie does in fact leave it. When he complies, even though it’s because you’re gently tugging in a such a way that forces him to, give him warm praise, and perhaps even a delectable treat.

– Provide the dog with more exercise, “quality, off-leash exercise,” Dr. Dodman says, because “a life entirely on leash is no life at all.” As we explained in a recent issue, dogs need to be able to run off leash at their own pace some of the time in order to meet their biological imperative to use their bodies. Without that, they become frustrated and more apt to overreact in situations they may find unpleasant. Walking Charlie on leash twice a day for more than a mile, as his owner dutifully does, simply may not be enough. It would be good to at least play fetch with Charlie in a fenced-in area so he can burn off more energy than walking at a human pace will burn. He needs some occupational therapy — something to take the place of actually looking for varmints, a genetic imperative for him.

– “Don’t feed the dog rocket fuel,” Dr. Dodman advises, by which he means don’t choose a diet that is super-high in protein. That will “put an anxious pet into orbit.” Consider that protein decreases the amount of a chemical called tryptophan that crosses from the blood to the brain. Tryptophan is the precursor to serotonin, which has a calming effect and helps establish a sense of well-being. So you don’t want to keep down tryptophan levels with a high-protein diet.

The range to look for so that a dog doesn’t get too little protein but also doesn’t get too much is 18 to 20 percent protein as dry matter, a number that can be found on dog food labels. The range for normal can go up into the 30s (and commonly does for grain-free foods). For dogs that don’t have fear-aggression, that’s fine. But a hair-trigger dog like Charlie who springs into action when he sees a skateboarder zooming along might do better with less. Studies have shown that excitable, aggressive dogs can do better with less (but not too little) protein.

– Try to avoid exposure to what brings out the hair-trigger temper, or at least limit it. “There’s no point in deliberately making a dog face his ‘enemy,’ Dr. Dodman says. “Don’t walk him into a crowd of skateboarders just because you have the power to tell him to ‘leave it’ with a head halter. If you can walk away from Ground Zero for skateboarding, do so.

“Keep in mind,” Dr, Dodman counsels, “that as far as a dog is concerned, skateboarding is all weird in addition to being potentially frightening. A person hovering on a piece of wood, or whizzing by on a bunch of metal — that’s extremely unnerving to a canine friend who doesn’t get it.”