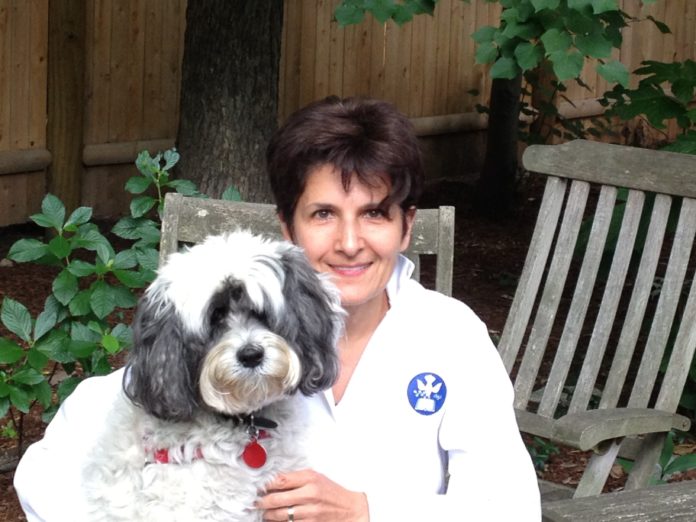 Territorial aggression. “Territoriality is normal for dogs,” says Tufts animal behaviorist Stephanie Borns-Weil, DVM. “‘If you step on my territory, I’m going to sound the alarm,'” is how she says dogs think of it. “Dogs can also be territorial in the car,” Dr. Borns-Weil adds. “A dog doesn’t quite get that his territory is moving. He thinks, ‘people and other dogs keep stepping on my territory.’ So everywhere the car goes, he’s barking dogs away.” That’s okay, she says. “You don’t have to do anything about it.”

It’s when a dog is “excessively territorial,” Dr. Borns-Weil advises — when he feels he needs physical force to get someone off his property — “that you have to teach him how to behave more appropriately, teach him how to stand down.”

Solution: With territorial aggression, “you need to provide your dog some rules,” according to Dr. Borns-Weil. The dog is acting out of the mistaken belief that it’s up to him to control who comes into the house and who doesn’t. So the rule might be that when someone comes to the door, that’s the cue for the dog “to sit, or go in another room, or whatever you decide,” Dr. Borns-Weil says. In other words, he needs to take the cue from you about who is welcome in the home and behave politely to guests.

It won’t happen in a minute. It could take a good couple of weeks. But it’s just a matter of putting some structure in place. Maybe you teach the dog that if he lies down in his bed when someone comes to the house, he gets a delectable treat. Or you teach him that not jumping up at a newcomer is met with abundant praise and some coveted fetch time. You’ll need to start with a “planned” intruder — someone you tell to come to the door at a pre-appointed time — and go from there. Since the dog is not acting out of fear, it shouldn’t be a complicated process.

When territorial aggression does get more complicated is when it overlaps heavily with fear aggression — true fear of those outside the family, or pack. It’s in those cases that guttural barks of warning have a better chance of turning into something physical because the scared dog might be bent on a preemptive strike. In those cases, guidelines to the dog about who’s the home’s gatekeeper will probably have to be coupled, at least at first, with putting him on a lead when someone comes to the door. When the visitor arrives, have your dog sit. Be sure to praise good behavior! Ask the visitor to ignore the dog completely as he is not ready to make friends yet. Once everyone is seated and the dog is relaxed, you can have the “interloper” throw the dog a delectable treat. When the dog is ready to approach, you can play the leash out gradually. This allows the dog to make friends on his own terms and in a way that feels safe. With this technique, people may come in as strangers and leave as friends.

Whatever you do, always let your dog know that you will protect him rather than expect him to simply “get over himself.” That is, don’t show anger at him for feeling fear. For dogs, as for people, all feelings are valid. Just help him to channel his emotions safely and constructively.

Predatory aggression. “This is a weird one,” says Dr. Borns-Weil. “It’s not really aggression in the classic sense. There’s no emotion in it. The dog is not angry, not fearful. It’s a feeding behavior, really.” That is, predatory dogs are hard wired for the behavior.

Fortunately, predatory aggression is “rarely directed at a household animal — or person,” Dr. Borns-Weil notes. It’s usually reserved for squirrels, chipmunks, animals of that sort, and sometimes for moving cars or moving bicycles. “We tend to see this kind of behavior in some of the terriers,” says Dr. Borns-Weil. “Some terriers have a very high prey drive.”

And there are instances where it can interfere with harmony, even safety, at home. “Every now and then you’ll get a dog with a high prey drive who will take down a running, squealing toddler,” Dr. Borns-Weil comments. “Sometimes the family cat is in danger.” Or a smaller family dog.

Dr. Borns-Weil knew of one family with three dogs, one big one and two little ones. The big dog grabbed one of the little ones by the neck, shook him, and killed him. It was a silent attack with little fanfare. Predatory aggression doesn’t involve barking or snapping. It’s more stealth — hard wired by a dog’s genetic code.

In very, very rare instances, predatory aggression can be life threatening for people, too — young infants, specifically. Some dogs with an extremely high prey drive fail to recognize a newborn as a member of the pack in its first month of life, mistakenly identifying the crying baby as wounded prey. It’s the high-pitched sounds and flailing arms and legs that cause the confusion. The result can be fatal to the child, which is why a predatory dog should never be left alone with a newly arrived infant, for the first few weeks at least. That’s when almost all the unfortunate attacks occur (usually within the first week of the first month). The dog is not angry or jealous. He’s simply acting on a primordial urge. (In truth, no dog, predatory or not, should be left alone with young children.)

Solution. The predatory urge is fairly immutable. You can’t really train a dog out of it. For that reason, Dr. Borns-Weil says, when it comes to territorial aggression, “avoidance is huge. There are some medications that can help dampen the tendency, including fluoxetine (Prozac) and buspirone (Buspar). But, she says, “for a high prey drive dog, the behavior is so intrinsically rewarding” that it’s best to avoid certain potentialities. “For instance,” she says, “it may be best to keep a dog with a high prey drive leashed around running young children.” Likewise, if you have a fenced-in yard frequented by squirrels and rabbits and don’t want to regularly see carnage, it might be best to pass on a breed like a Parson Russell terrier.

Irritable aggression. This type of aggression does not result from a particular kind of personality style or genetic predisposition. It’s aggression born of illness. If a dog is sick or in pain, his anxiety/aggression threshold will be lowered. Think of yourself in pain and how you might be more likely to snap at someone than when you’re feeling comfortable.

“I had a case recently of a dog who had always been a little bit anxious but never really aggressive,” relates Dr. Borns-Weil. “But then he developed terrible arthritis along with myelopathy — a spinal cord problem that caused him to lose function in his back end. All of a sudden he started showing aggression to other dogs and some strangers.

“It happened with my own 12-year old Tibetan terrier, Patches,” Dr. Borns-Weil says. “While we were checking out at a local grooming salon recently, a dog that was running loose in the store came over and jumped on her. This caused Patches, who has terrible arthritis, to lash out.”

Solution. To keep a dog with irritable aggression from acting out, “you have to solve the underlying medical issue — and treat the pain,” Dr. Borns-Weil says. It’s not a situation that requires behavior modification with conditioning. “If it’s an older dog,” she adds, “protect him from interactions that are going to be upsetting.” That’s what she does with her own dog, Patches. “I don’t take her to the dog park,” anymore, she comments. “She wouldn’t like it if another dog jumped on her, even to play.”

Mixed aggression. “Multiple aggressions piled on top of each other are some really tough ones,” Dr. Borns-Weil says. “When we have that situation, we start looking at the order in which we need to approach them. We always first solve conflict aggression (aggression directed at the owner — see the July 2014 issue of Your Dog) because you can’t solve anything else unless you get a solid relationship between the dog and the owner, where the dog feels secure in the owner’s loving but firm leadership.” After that, an animal behaviorist might tackle fear aggression (yes, it’s possible for a dog to act aggressively toward his owner and toward strangers), and so on.

In tough cases of mixed aggression, Dr. Borns-Weil points out, medications such as fluoxetine and buspirone might prove especially useful for putting some of the dog’s anxiety in the background while he learns new ways of interacting. You have to play it by ear.