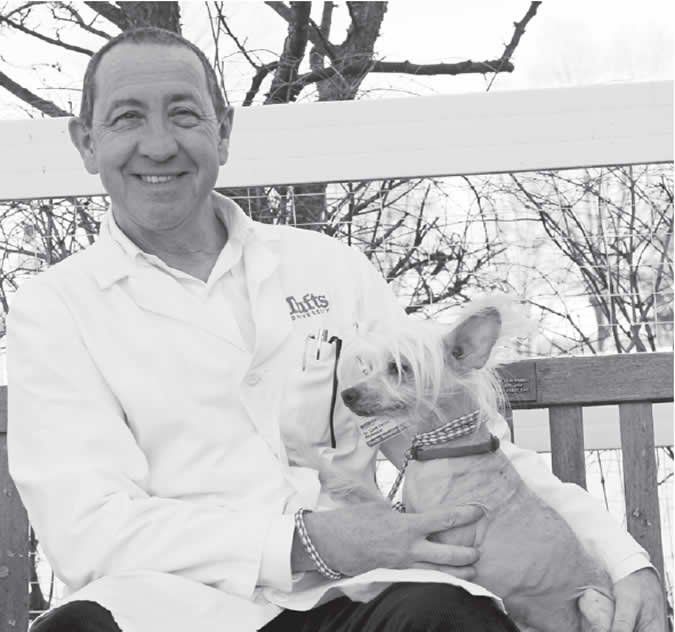 Hairless dogs have been enjoying a resurgence in popularity, says Tufts veterinary dermatologist Lluis Ferrer, DVM, PhD, DECVD, “because a lot of people are concerned about allergies to dogs and hair shedding. They are also beautiful. We especially see quite a number of Chinese crested dogs,” although the two other hairless breeds — the Mexican and Peruvian hairless, are popular, too.

It’s actually not a recent fashion. “Genetic studies have demonstrated that alopecic [hairless] dogs have existed for thousands of years, mixed with the general canine population,” Dr. Ferrer says. Interestingly, the hairlessness on all three breeds arises from the same genetic mutation. How that happened is not certain, although probably people ferried the mutation across the globe with them when they migrated over the ocean with their pet dogs from one continent to another, leading to the creation of hairless breeds on three continents: in Asia as the Chinese crested; in North America as the Mexican hairless, or Xoloitzcuintli, pronounced show-low-eats-queen-tlee, or “Xolo” for short; and in South America as the Peruvian hairless, or Peruvian Inca Orchid, which is a type of sighthound.

What is known with certainty is that these breeds have always proven companionable, not to mention useful, and even revered. “They were used to catch rodents and other small animals,” Dr. Ferrer says. And “in Mexico, they were considered sacred by the Aztecs, who believed they were needed by the souls of their human masters to guide them safely through the underworld.” As for Chinese cresteds, ancient Chinese mariners are believed to have sailed with them on board, while in Peru hairless dogs were depicted on pottery more than 1,200 years ago.

The Genetics of Hairlessness in Dogs

All hairless dogs are heterozygous for hairlessness rather than homozygous. That is, they have one normal gene and one gene for hairlessness. In fact, if two hairless dogs mate, only half of their offspring will be hairless because of that normal gene. A quarter of the litter will have the normal hairy coat. (Chinese crested dogs with a hairy coat are called powder puffs.) But another quarter — those who inherit the gene for hairlessness from both parents — will die in utero. That’s because the same gene mutation that blocks the development of normal hair follicles also leads to abnormal formation of the head and other vital organs. (It never happens if only the gene inherited from one parent has the mutation — in that case you just get the hairlessness.) “The exact reasons for a dog with the mutation from both parents not being viable are not clear exactly,” Dr. Ferrer says, “but we know there are many facets to it.”

It is not hard to care for a hairless dog, but you do have to be aware of certain necessary precautions that will keep the pet healthy. One is to avoid sun exposure. Hair protects the skin. With hairless dogs, exposure to the sun causes skin inflammation that can lead to infections and, in the long term, squamous cell carcinoma — a type of skin cancer.

“White dogs of any breed are also prone to developing skin cancer in areas that have less hair than other parts of the body, such as the head and abdomen,” Dr. Ferrer notes. But a hairless dog can get it on any part of the body, since all of the body is exposed. So “it is more common in those breeds,” he says, “and more risky.” If not removed surgically, squamous cell carcinoma can prove deadly over time. People get it, too. “It tends to grow very slowly in place, without spreading,” Dr. Ferrer remarks, “but it must be removed so there are no fatal consequences.”

Of course, you cannot keep your hairless dog (or any other dog) out of the sun 100 percent of the time. But, Dr. Ferrer says, “at least make sure to keep him indoors in the middle part of the day, when the sun is strongest.” He also advises putting a protective coat on the dog “from the neck to the tail. It’s quite effective,” he says, “because the most affected areas are the abdomen and the back.”

He suggests, too, protecting light or non-pigmented areas with sunblock. “Many of the Chinese cresteds are quite pale — pink to white,” he says. “Rub a pediatric sunblock on them. In general, we suggest an SPF over 50. Even then, keep the dog out of sunlight as much as possible.”

Along with keeping a hairless dog out of the sun, frequent bathing with an adequate shampoo is important for preventing skin infection, known as pyoderma. “Hairs are a protective barrier against infection,” Dr. Ferrer explains, “which is why hairless dogs need” extra help. “More moisturizing is needed as well,” Dr. Ferrer comments. Normally, he says, sweat glands and sebaceous glands, which secrete an oily substance called sebum, serve to lubricate the skin. But in hairless dogs, whose hair follicles are empty and extra large, the secretion is sub-par to non-existent, and that causes undue skin dryness. A moisturizing shampoo will both prevent skin infection and keep the skin well “oiled.”

“Oatmeal shampoo is usually good,” Dr. Ferrer says, “but some types of shampoos are particularly moisturizing for dogs. Two of the brands I recommend are Allermyl and Douxo Calm. They contain many fatty acids and ceramides or sphingosine, among other substances. These are lipids that occur naturally on the skin of most dogs that stop moisture loss. But hairless dogs lack normal amounts of them. And the lack of a hair coat itself induces dryness. Using a cream rinse (for instance Epi-Soothe) after bathing or a moisturizing cream or mousse (for example, Douxo Calm or Dermoscent Mousse) once or twice a week also helps, he says.

It’s also important for a hairless dog to have regular dermatologic examinations. Most develop cysts on their legs below the knees — small white nodules — in addition to being prone to skin infections and skin cancer. The cysts do not cause pain or discomfort. “It’s more a cosmetic issue,” Dr. Ferrer notes. But infections and cancer need to be checked for. If a skin infection is not far along, “usually just a special shampoo will take care of it,” he says. “You have to switch to an antiseptic shampoo that contains chlorhexidine, which is an antibacterial agent, or miconazole (such as is contained in Malaseb shampoo), if the infection is caused by yeast. If it becomes deep, an antibiotic will need to be prescribed.”

Hairless dogs need regular dental checkups in addition to regular skin exams. The same gene mutation that causes the hairlessness causes a variety of dental abnormalities. These include the absence of teeth, often some combination of incisors, canines, premolars, and molars. In some cases, according to research published in the journal Veterinary Dermatology, up to half of the teeth are missing. Some hairless dogs also have discolored, malformed, or malpositioned teeth. The angle of the canine teeth, for instance, can be abnormal.

These extra health precautions notwithstanding, Dr. Ferrer says that hairless dogs can make good pets, in no small part because of their intelligence and their long relationship with humans. In terms of their being hypoallergenic for humans, it’s not a sure bet. It never is with dogs despite what you might hear or read on the Internet. For some people, all it takes is a very small amount of allergen on a particular dog to get them sneezing and their eyes running and, in some cases, to cause hives and even more serious effects.

But hairless dogs do in certain ways have a smaller chance of causing an allergic reaction than dogs with hair. In general, it’s sloughed off skin cells that cause allergies — not hair — so one wouldn’t think a dog’s being hairless would help. But skin cells attach to the hair, Dr. Ferrer says. “They get caught in it. So if you reduce the amount of shedding to essentially no shedding at all, you reduce exposure to epidermal allergens” — allergens contained in cells on the skin’s surface.

Dr. Ferrer also points out that the “hair and the skin are quite similar. They share many allergens,” so hairlessness in a dog may help prevent allergic reactions in a way “that is not completely understood. It’s not a guarantee,” he reminds those prone to dog allergies who want to live with a dog. But the chance for canine companionship without a scratchy throat or other allergic reactions may be better. 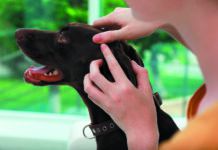