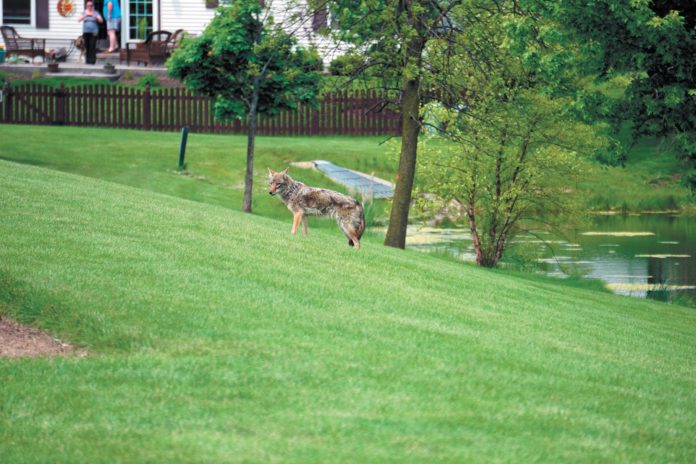 Coyotes are well adapted to both suburban and urban areas — they’ve even been spotted in New York’s Central Park. And you may have been seeing more of them because while coyotes tend to be born in the spring, they often spend much of the summer in and around their dens, both being protected and fed by their mothers and being taught to fend for themselves by learning to hunt.

Keep away from them, no matter their age, no matter how dog-like they appear, and no matter how much you might want to care for one that seems to have gotten lost. (Some people have actually mistaken coyotes for dogs.) A “coyote will never be completely tame and able to bond with humans as a domestic dog can,” says Florina Tseng, DVM, the director of the Wildlife Clinic and associate chair of the Department of Infectious Disease and Global Health at Tufts Cummings School of Veterinary Medicine. Dr. Tseng adds that “coyotes have an innate wariness of humans and are more unpredictable than domestic dogs. Because of this, the animal will always be a potential threat to people.”

Keep your dog away, too, and definitely on leash in areas where you know or suspect coyotes are raising pups. Small dogs in particular are at risk of harm, and even death, when coyotes are feeling territorial during denning, a time of pup-rearing and keeping babies safe in the den. Larger dogs tend not to be in much danger of a conflict with a coyote, but as with smaller dogs, keep them on leash in places where you sense baby coyotes are being cared for.

Coyotes in general are not a threat. They’re not looking for interaction. But if a coyote does approach while you’re walking your dog, most probably at sundown or at night, act aggressively (without getting physical). Stand tall, hold out your arms to appear larger, and, if necessary, make loud noises, wave your arms, and throw sticks and stones near (but not at) the animal. Keep in mind that in rare instances, a coyote may be rabid.

In addition, if you know or sense there are coyotes in your area, do not allow your dog in the backyard by himself, never leave food out, and remove tall grass from around your home to reduce what a coyote could use as protective cover. Finally, alter your dog-walking route if necessary. Why court confrontation?