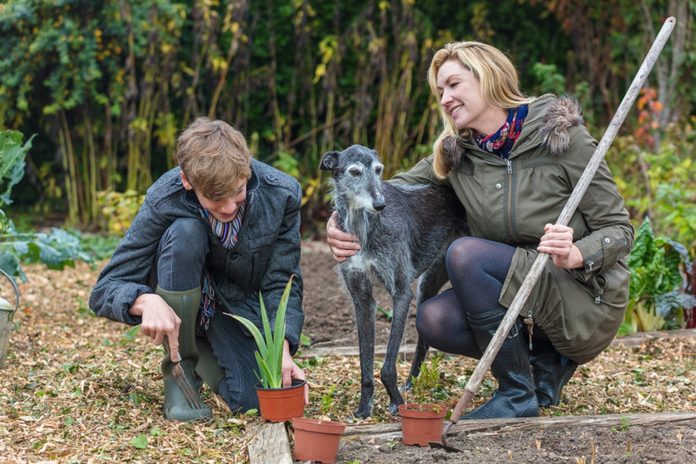 You like peonies; your dog likes peeing. You dig asters; your dog digs, period. You stop and smell the roses; your dog sniffs what decomposes. How can you and your canine pal possibly enjoy the same garden? It would be great if you could, because time outside with you is time not spent waiting indoors for something more exciting to happen.

It turns out there are ways to make your garden dog-friendly without losing the aesthetic pleasures it offers you. It just takes a bit of planning — and compromise. That is, probably even the prettiest dog-friendly garden is never going to make it onto the annual garden tour. But if you can give up the perfection of formal grounds in favor of something eye-catching but usable to an animal who couldn’t distinguish a petunia from a begonia (and would never care to), you can come up with something that will work for both you and your pet.

So how do you keep your dog from trampling plantings that can’t afford to be underfoot? One way is to plant a buffer zone of hardy grass like myrtle or pachysandra or dense edging plants like boxwood between where it’s okay for your dog to be and where it isn’t. Dogs, like people, aren’t going to readily choose to make their way through thick greens if easier paths are available.

“Paths” is a key word. Create them intentionally so your dog has places to roam the garden freely without disturbing fragile flowers. Often, a perimeter path around the outside of the garden, with dense grass or undergrowth between it and the garden flowers, is a great idea. Your dog may see it as her venue for keeping a lookout for interlopers — squirrels, rabbits, and the like. You can even teach her that the path is hers to patrol by leaving treats along its way, Hansel-and-Gretel-style, and praising her for staying there to watch over things. Paths you create intentionally should never be made of sharp-edged material but instead should be covered with, say, soft mulch or flagstone.

Another way to keep dogs away from delicate plantings is by putting prickly plants around, or in front of, them. You can also ring flower patches with spices that dogs don’t like. Dried mustard or crushed dried pepper, both awfully pungent, even for a dog, could help in this regard. Most dogs wouldn’t feel too good about crossing a border of bitter orange or coffee grounds, either (and the grounds could do double duty as fertilizer for some plants).

Still another method for creating a border between your dog and plantings you don’t want her near is to make use of container gardening here and there and also raised beds. It’s easy enough to train a dog to keep out of raised beds through judicious use of treats and firm (but not mean) call-outs that high-up beds surrounded by wood or low fencing are off limits.

Among the other tricks for keeping your garden safe from your dog’s antics are to plant things more fully grown than you might otherwise. A dog is a lot less likely to mess with a mature rose bush in full thorny glory than a little “stick” that will someday grow into a bush but for the present looks for all the world like something good to gnaw on. Ditto for rhododendron bushes and hydrangeas. Granted, they cost more than flowering plants that look like little more than collections of thin twigs that you then nurture to “adulthood” over the course of several growing seasons, but with the price comes a much lower risk of losing your new planting to your pooch’s curiosity.

For those whose dogs are major diggers, consider devoting a small part of the yard to a sand box or even just a dirt box in which you bury good things for your dog to find. That will let her give into her urge without upending something you want to stay put in the ground.

To keep dogs from urinating on plants, which can “burn” them, designate a spot in the yard for peeing — perhaps behind the garage — and teach them to use that place and that place only. Puppies will get it in a few days, older dogs, within a week or two. As always, treats and warm praise are key to success. You might also want to use a vertical marking post for male dogs, such as a piece of driftwood or a cheap garden gnome. Males tend to like to urinate on things with a vertical orientation (hence, the popularity of fire hydrants).

In addition to protecting your flowers, you want to protect your dog, so make sure there’s a shady spot for her to lie in. Yes, a lot of dogs like to lie in the sun for lengthy periods like a beached sea turtle, but they also need to have the ability to cool off. Many enjoy the coziness of a doghouse. It allows them to be with the action, but not in it, while keeping out of the sun.

Along with providing a cooler, shadier spot, always have out a bowl of water. Dogs can overheat pretty easily.

Keep in mind, too, that just because you know your garden’s borders, it doesn’t mean your dog does. To her, all the world might be a garden stage to explore and stake out, so if your yard isn’t fenced in, you need to take other precautions. For instance, those whose hounds are Houdinis and will work to get out by digging under rather than jumping over, an underground barrier of chicken wire or other material might be in order. Better home than roaming.

Finally, remember that unless you live on acres and acres where your dog can run free without danger of being struck by a vehicle or encroaching on another person’s territory, being in the garden with you while you plant or weed does not take the place of daily physical activity. Yes, it’s great environmental enrichment and offers far more mental stimulation than lounging dully inside. But it’s no romp in the park for a pet like a retriever or a Lab. Such dogs need more running around and play than a garden setting can provide.

The American Society for the Prevention of Cruelty to Animals (ASPCA) has a very long list on its website of flowers and flowering shrubs that are toxic to dogs, including very common ones like hydrangeas, various types of lilies, tulips, azaleas, and the list goes on. That said, the plant must be ingested to cause harm; sniffing it or touching it doesn’t cause a problem, explains the medical director of the ASPCA’s Animal Poison Control Center, veterinarian Tina Wismer, DVM.

How much does a dog have to ingest to get sick? “Toxicity of plants can be complicated,” Dr. Wismer says. “Factors involved include the variety of the plant (some are more toxic than others) and the stress the plant is under (“more stress means more toxins”). As an example of how this can play out in real life, a dog can only eat enough of a hydrangea to cause vomiting, whereas a horse can eat enough to cause cyanide poisoning.

Of course, it’s all moot if your dog doesn’t eat the daisies in the first place. However, Dr. Wismer points out that a dog can get sick if poisonous flowers are cut for a bouquet and then the water in the vase becomes toxic (which can happen with, say, lily-of-the-valley.) If the dog manages to quench his thirst with the vase water, he could fall ill.

In actual practice, plant toxicity is not something the veterinarians at Tufts are particularly worried about. Says Tufts veterinary internist Michael Stone, DVM, “there aren’t many plants that are really bad for dogs. Most, such as poinsettias, cause self-limited vomiting if ingested.” That is, the dog retches, and then the episode is over.

Dr. Stone does point out that “the sago palm, common in the South, may be very toxic.” (The ASPCA’s Dr. Wismer singles out sago palm, too, saying it can cause liver failure.) “Cocoa mulch may be toxic as well,” Dr. Stone says. “Other than those, I don’t worry too much. I’ve never seen or heard of a serious case of toxicity to dogs from flowers like tulips or azaleas.”

Tufts emergency room veterinarian Elizabeth Rozanski, DVM, has the same take. “Most plants are fine for dogs,” she says, although she agrees with Dr. Stone that “the sago palm is horrid and is occasionally sold as a house plant in the north as well.” And she calls cocoa mulch “a potential killer.”

You can learn more about potentially toxic plants as well as other canine poisons at aspca.org. 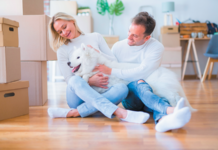 ‘Trying on’ Parenting With a Dog