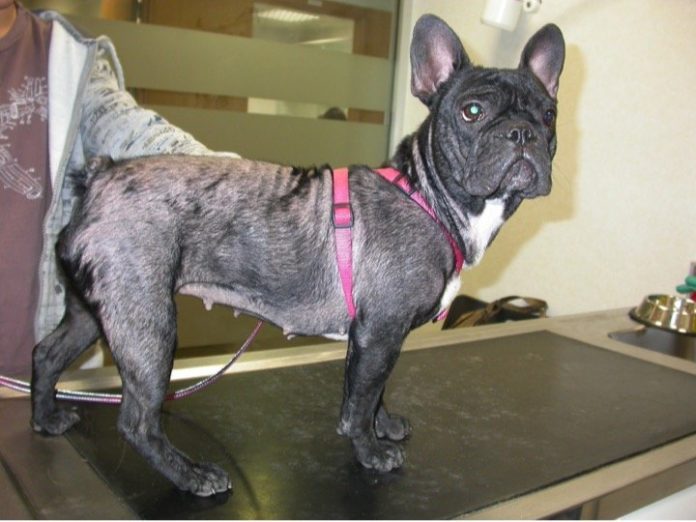 Say “mites,” and many people think “mange,” a highly contagious disease often referred to as scabies or sarcoptic mange. Caused by a species of mite known as Sarcoptes scabiei, it occurs when the microscopic animals burrow through a dog’s skin, causing severe itching and irritation. Treatment consists of oral and/or topical drugs that kill the mites, with the dog perhaps being dipped in a medicated shampoo. Ongoing treatment over the course of several weeks is critical, as the drugs kill only living mites, not eggs that haven’t hatched yet. The eggs need to mature so the continued drug administration can take care of that next generation of mites, too.

Because the disease is zoonotic (meaning it can jump from one species to the next, including from dogs to people), it strikes fear in a lot of dog owners.

The good news is that it’s relatively rare. But there’s another kind of mite disease that can strike dogs that is much more common. Called demodicosis, it causes itching, inflamed skin, and secondary bacterial infections that need to be treated with antibiotics on top of drugs required to deal with the mites themselves. Hair loss is also common (hair’s involvement will become clear shortly). While demodicosis is not contagious, it causes dogs extreme discomfort. They lick and bite at themselves and break their skin.

Demodicosis arises from what are called Demodex mites that live in hair follicles. Their taking up residence in dogs’ hair follicles has only recently been confirmed.

A Brief History of Mites

Mites come in many species, but mite species that fall under the Demodex umbrella have probably been around the longest — some 200 million years. That’s when hair developed on mammals, and Demodex mites adapted themselves to living in hair follicles — little cavities just beneath the skin. Over time, mammals have changed, but hair follicles have been evolutionarily sluggish, allowing Demodex mites not to have to morph in any way to adapt to changes in hair follicle structure.

The architecture of hair follicles from one animal to another has remained so constant that Demodex mites even take up residence in marine mammals like whales — and also in people. They can live not just in hair follicles but also on skin. They are in fact living on the skin of your face as you read this. They made their way from your mother to you when you were a newborn baby and she often had you cuddled in her arms, perhaps while you were nursing. Demodex mites have been detected in the skin of all mammals and are considered part of what is called the cutaneous microbiome (the environment of all living matter in the skin).

Normally, Demodex mites, cigar-shaped parasites that range in size from a hundredth of an inch to a few thousandths of an inch, are harmless (even though they are in the same class as spiders and ticks). Their numbers are controlled by cells of the immune system, including lymphocytes. It’s when the immune system becomes compromised that the mites proliferate out of control and cause harm. In people, that harm is rosacea. Mites are not completely responsible for rosacea, but they are definitely part of the disease process.

In dogs, unchecked proliferation of the Demodex mite population arising from an immune system thrown out of whack is what leads to demodicosis. What would suppress the canine immune system or make it go haywire?

Treatment with steroids for an unrelated disease could downgrade the immune system’s ability to operate as well as possible, as can lymphoma or endocrine disorders such as Cushing’s disease or diabetes mellitus. Any number of conditions can result in immunosuppression, including viral infections and various drugs. When they do, the Demodex mite population increases over 40-fold. What is normally a vey low number becomes an infestation run amok.

Other Ways Dogs Get Mites

While it’s usually immune system suppression that leads to an overgrowth of Demodex mites in dogs, sometimes they get the itching, discomfort, and hair loss of demodicosis because of what appears to be a genetic defect that allows the mites to over-proliferate. In these cases, the dogs get the disease very young, at just three or four months of age. In medical-ese, it’s called canine juvenile generalized demodicosis.

Pitbulls and American Staffordshires are the breeds most disposed to developing the juvenile form of demodicosis, says Tufts veterinary dermatologist Lluis Ferrer, DVM, PhD, DECVD, and in a more general way, short-haired breeds are more susceptible than long-haired breeds. “But any breed can get it,” Dr. Ferrer notes.

Fortunately, whatever the reason for demodicosis, there are solutions.

Until very recently, says Dr. Ferrer, the treatment for demodicosis, whether the juvenile form or the kind that takes off because of an immune problem, was a medicine given orally called ivermectin (in addition to antibiotics needed to clear up bacterial infections that occur in what becomes vulnerable skin). “It was very effective,” he says, “usually taking several months to reduce the mite population sufficiently to clear the disease, but a little bit risky.” Some dogs experienced significant adverse neurological effects, ranging from tremors to temporary blindness and even, in some cases, death. “It was a small percentage of dogs” reacting this way, Dr. Ferrer is quick to point out — “a minor number of cases.” But, he adds, “because the side effects were so very severe, it was always a concern.”

Fortunately, in the past year or so, a new family of drugs has been developed — isoxazolines (fluralaner, afoxolaner, sarolaner) — that seem to be extremely effective as well as safe. “Everyone has switched to using this new treatment,” Dr. Ferrer says. “It works in general without any concern of serious side effects.”

For puppies who get the disease because of what appears to be a genetic defect, the isoxazolines is all it takes. “It kills the excess of mites, and usually they don’t come back,” Dr. Ferrer says. “Once in a while there’s a relapse and the young dog needs a second treatment that takes care of the problem once and for all, but usually it works with one course of medicine.”

In adult dogs, however, a more thorough investigation is called for. “A dog has been living with the mites his entire life without any problem, so why now?” as Dr. Ferrer puts it. In other words, the veterinarian may need to do some sleuthing. Does the dog have undiagnosed Cushing’s disease? Lymphoma, a type of cancer that could also cause demodicosis? An as-yet undetected virus? “If you can identify and clear up the underlying cause,” Dr. Ferrer says, “the problem is not going to come back.”

In other words, as uncomfortable and disfiguring to a dog’s skin as the problem is, there is a solution — and finally, one without potential side effects that are worse than the disease itself.

A European will have Demodex mites different from an Asian, and an Asian will have Demodex mites that differ from those that live on someone who comes from Africa. “They have been living for so many million of years that they have diversified regionally,” says Tufts veterinary dermatologist Lluis Ferrer, DVM, PhD, DECVD. And the mite population on a person does not change if he or she migrates from one part of the world to another. Says Dr. Ferrer, who was born and grew up in Spain, “I have the same mites I got from my mom 50 years ago. You might think that after living in the U.S. for five years, I would have more American mites. But no. You maintain the population of mites you received at birth.”

It’s more an academic point than a medical one, Dr. Ferrer comments. “There are only mild genetic differences between mites from different continents; they all cause the same diseases,” he says.

Improving Treatment of Mites on Dogs

Dr. Ferrer, along with scientists around the world, have been working hard to understand the nature of mites so that the treatment for an overgrowth of the microscopic parasites in a dog can keep improving. Here are some of the things they have learned in their recent investigations:

Every single dog carries Demodex mites. “This was something that was previously suspected,” Dr. Ferrer says, “but uncertain. We have been able to develop a new technique to detect the mites even in small numbers and learn that they are distributed all over the dog’s body, wherever there is hair.” The mites colonize the follicles like nomads, moving from one to the other during the night in their own stealth fashion.

After treatment with ivermectin or with the new isoxazolines, the mite overgrowth is controlled, but the mites do not completely disappear from the skin of the mammal. Simply, they return to low numbers, just as in healthy animals. The treatment normalizes the Demodex populations, allowing the immune system to get them under control.