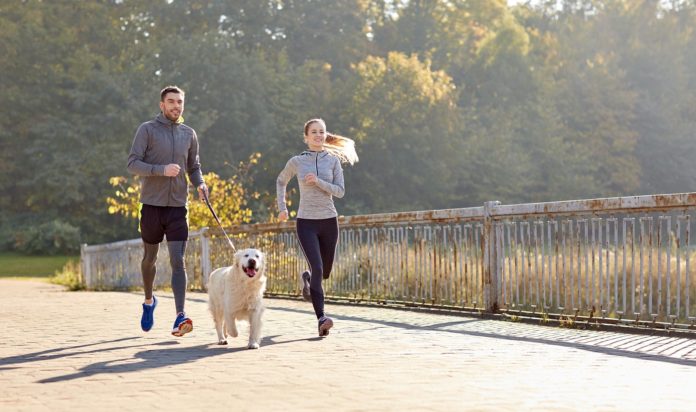 All too few dogs engage in enough physical activity, which not only contributes to the epidemic of unhealthful excess weight in an estimated two in five of our canine companions but also leads to behavioral issues. Problems like whining, panting, barking, and aggression could be ameliorated with regular aerobic activity that gets the heart rate up and excess energy out. Some veterinary experts even put vigorous physical activity in front of training, diet, and other measures as a mood stabilizer and overall calming influence — no surprise to people habituated to using a good workout to lift their spirits and “get the venom out.”

Unfortunately, a number of people who come to our Behavior Clinic say they’re too busy to treat their dog’s annoying or disruptive behavior with regular exercise. But what if you incorporated your dog’s exercise into your own? According to the latest estimates, one in five people through age 49 jogs or runs, along with almost one in 10 people through age 64, making for well over 100 million Americans who hit the streets or gym with sneakers on. And an estimated 14 million Americans go bike riding at least twice a week.

With those numbers in mind, we offer tips for jogging with your dog or having him run alongside you as you bike.

Be aware that if you’re a serious runner or biker who competes, having your dog go with you means you’re not going to be training at those times. While you may enjoy the togetherness and the exercise, the outing is largely for your pet’s benefit — not for you to work up to a particular pace. If he wants to stop to sniff a hydrant or otherwise take a break, let him. Imagine if you wanted or needed to stop while running or biking but were forced to keep going.

Not for all dogs

Some dogs are born to run, and run hard — Weimaraners, Rhodesian ridgebacks, and German short-haired pointers come to mind, although many other types of dogs enjoy running as well. But those with short noses, like pugs and other brachycephalic breeds, are probably not going to do well with running alongside you. They simply will have too much trouble breathing comfortably — and safely. Ditto for small dogs. They have short legs and expend a lot of energy covering little ground so can’t easily go a mile or two at a clip, even with breaks. Old dogs may not be up for it, either. For any dog, it’s best to get an all-clear from the veterinarian before claiming your pet as an exercise buddy.

Think back to the first day you ever jogged or rode a bike for some distance. Now imagine if you were tethered by a leash to someone who had been at it for years and had to keep up with that person no matter how exhausted you were becoming. You would literally be in danger of collapse. The same is true for a dog. It’s important to increase his distance and speed gradually, perhaps at first going every other day and starting out with quick walking rather than running (a little hard to do with a bike, but you can make it happen). After a bit, you will be able to build up his tolerance for jogging alongside you for a good 20 minutes at a stretch. Some dogs may even want more than that after a while.

Look for signs of fatigue — and respond accordingly

At all points, even after you get a regular rhythm established, look for signs of pain, discomfort, or exhaustion. The cues can be subtle (which means no headphones so you can always be paying close attention to your pal); the excitement of running with you may decrease a dog’s own awareness of pain or discomfort. But if you see your dog’s energy start to falter even just a little, stop running or biking and walk, or even stop, for at least a few minutes. If he doesn’t seem game to keep running, the exercise session is over.

Warm up and cool down

No matter how buff your dog gets, every time you go out together, start with a warm-up — at least five minutes of just walking — and end with a cool-down — five minutes of walking on the back end. Just like a person, a dog should not go from high-intensity pumping to a heart beating at a resting rate with no in-between.

Keep in mind that because dogs essentially don’t sweat (they pretty much just pant), their bodies don’t cool as efficiently as people’s. That puts them at greater risk for dehydration and even heat stroke in the hot weather, which is why during summer you should go out with them in the early morning or the evening to avoid the strongest heat of the day. Mornings are best because the pavement won’t have heated up yet. Of course, no matter what the weather, have water at the ready. A thirsty dog will very quickly get the hang of drinking from a bottle.

After each run, always inspect your dog’s paws. Rough pavement can abrade a dog’s pads until they have a chance to toughen with use, and during the cold weather, chemicals, salt, and sand that cities and towns use to melt snow can prove irritating. Salt and sand should be brushed out.

Some dogs enjoy running on some days but not others. Some dogs enjoy running as part of their routine for a while but then get bored with it. Some like to run until it’s time to stop and inspect a fire hydrant. All dogs would rather run on a nice, pretty path rather than around and around a boring track or crowded roadway. If you find at any point that your dog is not enjoying the outings, find another way to engage him in physical activity — perhaps chasing a ball or catching a Frisbee — and get yourself another exercise partner. If it ceases to be fun for your pet, it’s the wrong activity.