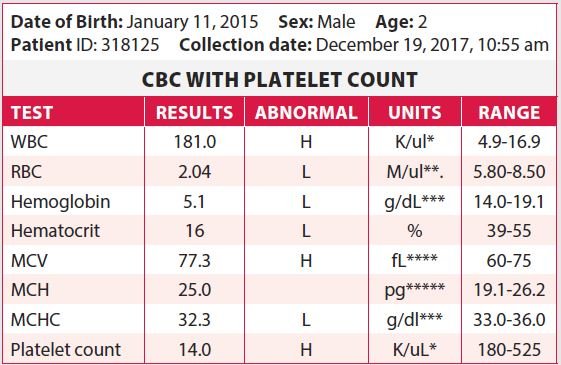 Here is a CBC for a recent patient of Tufts Cummings School veterinarian Elizabeth Rozanski, DVM — a two-year-old Labrador retriever named Harry. Normally, she says, the CBC is a starting place for figuring out what’s wrong. It tells the doctor what tests have to be ordered next as clues to the problem unfold. For this particular dog, there are a lot of abnormal numbers, making it seem like a diagnosis might get complicated. But in this case, Dr. Rozanski comments, the extremely high white blood cell count (as seen on the first line of numbers), along with the fact that on a blood smear almost all the normal white blood cells were replaced with blasts —immature, uncharacterized cells — led straight to the diagnosis of leukemia. Low red blood cell count also supported the diagnosis of leukemia. Leukemias are always in the bone marrow, decreasing the production of red cells as well as platelets.

Along with the up-front numbers shown on a CBC, there is an actual exam of a blood smear under a microscope that gives even more information. Most of the detail is about white blood cells, of which there are four main kinds. On a lab report, they are typically expressed both as a percentage of the total white blood cell count and in absolute numbers (indicated by the term “Abs” in parenthesis). First come the neutrophils, which account for 70 to 80 percent of the white blood cells. Segmented neutrophils (seg neuts) are normal, mature cells.

Lymphocytes, monocytes, and eosinophils together account for only 20 to 30 percent of white blood cells. A high eosinophil count can signify an allergic reaction. There are not supposed to be any blasts whatsoever. If there are (as is the case here), something is wrong.