Digestive disorders, immune system breakdowns, thyroid dysfunction, cognitive decline, reproductive problems, cancer, heart disease. These are just some of the problems soy is said to cause for dogs. Internet message boards are rife with discussion about the downsides of soy as an ingredient in dog food, and even some veterinarians have said that soy causes serious allergic reactions, reduces the digestibility of protein, results in gassiness and diarrhea, interferes with the absorption of minerals like calcium and iron, “creates” food allergies in pets, and has something to do with bloat. Some sources go as far as to say that soy can potentially lead to brain damage in dogs.

No and no. “Some people think soy is being used in diets as a cheap, inferior replacement for meat, but that’s not the case,” says Tufts veterinary nutritionist Cailin Heinze, VMD, DACVM. “It’s not inferior. Soy is the best quality of the plant proteins. While some animal proteins are more digestible and usable by dogs, other animal proteins aren’t as good as soy. So having soy protein in a diet doesn’t mean the protein quality is bad, and having meat or other animal protein in a diet doesn’t mean that the protein quality is good.”

It should be noted that soy is used as a protein source in human infant formulas as a replacement for milk protein for babies who do not tolerate regular milk-based formulas. And like people, dogs are omnivores; their bodies are adapted to absorb nutrients from both plant foods and animal foods. In fact, Dr. Heinze says, “we use soy quite a bit as the main or only protein source in diets for dogs with certain health conditions. There are lots of legitimate medical reasons soy can be a really good ingredient in a pet food.”

When Soy Can Help Dogs

One of the conditions for which soy can be the right choice is a food allergy. Contrary to the popular belief that soy can create or exacerbate food allergies, soy that is broken up into very small pieces — hydrolyzed soy — can actually be helpful for dogs with food allergies and is commonly used for both the diagnosis and treatment of canine food allergies. The food ingredient to which dogs are usually allergic is protein, and by breaking up soy into small bits, its protein can “sneak through” the digestive system without starting an allergic reaction, thereby allowing an allergic dog to assimilate the amino acids in protein without the side effects common with allergies.

Soy is also good for dogs prone to bladder stones known as urate stones, which most commonly affect Dalmatians and English bulldogs. The diet used to prevent a recurrence of the stones once they have occurred must be low in components of protein called purines. The protein in soy (and other plant foods) is lower in purines than animal tissue like chicken and beef, but it still has high nutritional value. “That’s why human vegetarians tend to eat a lot of soy,” Dr. Heinze says. It helps ensure that they won’t fall short on good quality protein.

Another ailment for which soy is a good fit as a food ingredient for dogs is severe liver disease, such as happens in dogs with liver shunts (a situation in which most of the blood that normally goes through the liver goes around that organ instead so that toxins which are supposed to be filtered from the blood by the liver remain in the body). “Soy has been shown to be more liver-friendly than most animal proteins,” Dr. Heinze says. “It’s a ‘cleaner’ protein source that seems to be less associated with side effects than animal proteins in dogs with severe liver disease,” she comments. “Their livers can handle it better.”

But even if your dog does not have one of these conditions, soy is a perfectly safe, nutritious food for your canine pet.

Why Soy Has A Bad Reputation

It’s not clear why soy has developed such a poor reputation as an ingredient in dog food, although Dr. Heinze says that since the advent of the Internet, myths about foods (for people as well as for dogs) have been able to make the rounds a lot more easily. Certainly, the misconception that plant protein is always a cheap and lower-quality alternative to animal protein has fueled the negative myths surrounding soy.

Those myths then become compounded by marketers of dog foods who want to cater to customers’ desires. So, Dr. Heinze says, a food manufacturer will declare “no corn, no wheat, no soy.” She has had representatives of companies that use this advertising tell her that they do not think that soy is unhealthful. “But they want to sell food,” so they give the customer what the customer wants, and in that way they perpetuate the misinformation. “The ‘no’ list implies to the consumer that the ingredients don’t have good nutritional value or are poorly digested,” Dr. Heinze says, when that list is typically nothing more than a marketing tool designed to sell food based on fear.

The bottom line: soy is a perfectly nutritious ingredient in dog food, and in the case of some illnesses, even a therapeutic one. “Soy is no more prone to cause food allergies than, say, chicken,” Dr. Heinze relates, and there is no proof that it causes any other sicknesses in dogs, either.

One less thing for you to worry about as you choose your dog’s rations. 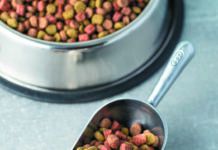 Measure Food By Weight, Not Volume 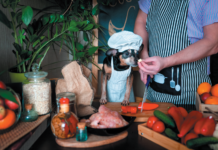 So You Want to Make Your Dog’s Meals Yourself