It has been almost a decade since Tufts veterinary nutritionist Lisa Freeman, DVM, tallied the responses of more than 750 people who responded to her questionnaire asking what bully sticks are made of. Almost half were not aware that a bully stick is a bull or steer penis. Neither were almost 40 percent of veterinarians who filled out the survey.

Now more people know. But what they still may not realize is just what a caloric punch bully sticks pack. Dr. Freeman’s survey showed that half the respondents thought a 12-inch stick contains 70 calories, 20 calories, or zero calories. Nope. It contains on the order of 150 calories. In fact, when bully sticks were analyzed for calories, they contained anywhere from 9 to 22 calories per inch. Thus, in some cases, a 12-ounce stick had as many as 264 calories. That’s almost a third of the calories a 50-pound dog should have in a day. 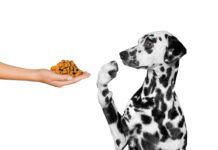