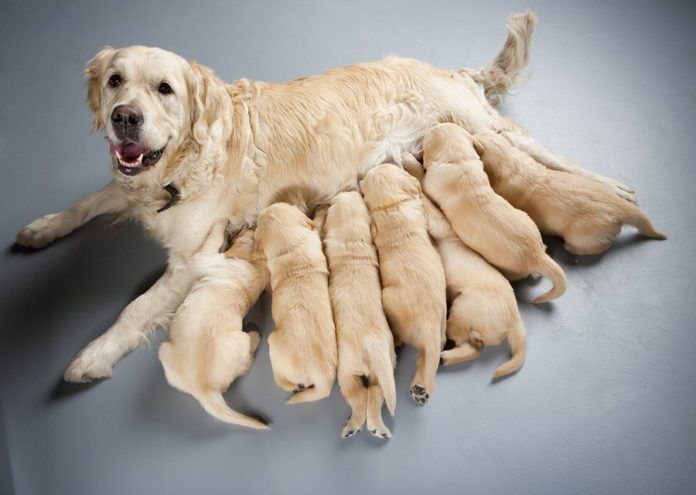 A recent Tufts survey of more than 1,000 dog breeders found that 17 percent of them — more than one in six — were feeding their pregnant and lactating bitches diets that were not nutritionally adequate. The finding was “quite concerning,” says Tufts Cummings School veterinarian Cailin Heinze, VMD, DACVN, who is board-certified in nutrition. Bitches who do not eat right during pregnancy or while nursing their litters are at risk for problems such as eclampsia (dangerously low blood calcium while lactating), and may also have smaller litters with a higher risk of puppy death.

The Tufts study suggests that many of the breeders feeding their pregnant dogs incorrectly may have been paying more attention to specific diet ingredients and other diet factors rather than to the information on the package in fine print that lets a dog owner know whether a food is right for an expectant dog or one who has recently given birth and is still letting her litter suckle.

How to Feed Gestating Dogs

Pregnant and lactating dogs require higher levels of protein and fat than other adult dogs, as well as high concentrations of certain minerals, particularly calcium and phosphorus. (These minerals are essential for bone formation in puppies.) But you don’t need to examine food labels nutrient-by-nutrient. Whether a food is appropriate for a pregnant or lactating bitch can be determined from the nutritional adequacy statement, also called the “AAFCO Statement,” often found on the back of the package, near the bottom, or squished up somewhere on the sides. It needs to say the food is appropriate for “pregnancy and lactation” or for “all life stages.” But even there, there’s variation in how that adequacy is determined.

The Association of American Feed Control Officials, or AAFCO, requires a food to be either “formulated to meet” the nutrition levels necessary for healthy gestation and lactation or put through an actual feeding trial in which pregnant and lactating dogs are actually fed the food and found to do well on it. In the first case, the expected nutrient levels in the food — determined by a laboratory or a computer analysis of the recipe — are simply checked to see if they match up to the published standard. In the second, the AAFCO statement will say, “Animal feeding tests using AAFCO procedures substantiate that [this food] provides complete and balanced nutrition for pregnancy and lactation.”

“Ideally,” says Dr. Heinze, “you want to choose a food that has been put through feeding trials rather than simply compared to a set of numbers on paper. Why would you want something simply ‘formulated to meet’ the standard when you can go with something that has truly been put to the test in actual dogs?” to make sure their bodies properly digested and absorbed the food, she asks rhetorically.

There are other distinctions, too. If the diet has been “formulated to meet” the proper nutrient levels, it will say it’s for “all life stages” or “for growth,” meaning for puppies. “All life stages” includes the stages of pregnancy and lactation, as well as growth and adult maintenance. For their published nutritional profiles, AAFCO lumps the “growth” of dogs during puppyhood together with the needs of gestating and lactating bitches. In theory, this means that the nutrient concentrations in the food can support a normal pregnancy, lactating mothers, and puppies.

If the diet has been put through actual feeding trials, on the other hand, what you want to see on the AAFCO statement for a pregnant or lactating dog are the words “all life stages” or “gestation and lactation.” The “all life stages” designation means the diet will have been fed to dogs before, during, and after their pregnancies, as well as to their weaned puppies, to make sure the nutrient levels are adequate for proper health and development. And “gestation and lactation” will mean the diet was fed to dogs specifically at those times of life.

What you don’t want to do, Dr. Heinze says, is feed a pregnant or lactating dog a food that has been through a feeding trial only in puppies to test for their proper growth. Theoretically, a food for “growth” will serve the needs of a pregnant or lactating bitch because the nutrient standards for her are the same as for puppies, as we stated above. But it won’t actually have been fed to pregnant or nursing mothers to see about the bioavailability of nutrients in their bodies unless the label says that it underwent feeding trials for gestation/lactation or all life stages.

For most of a dog’s life, it is important to carefully control and measure how much food she eats. Today’s lifestyles make too many dogs overweight. Just as the nation’s people are getting heavier and heavier, so are the nation’s dogs. And according to at least one study, an overweight dog might live, on average, two years less than her counterpart who has ideal body condition.

But late pregnancy and lactation are the two periods of a dog’s life when limiting calories may be a bad idea. “During late gestation and lactation,” Dr. Heinze says, “it can be a challenge for some bitches to get enough calories. During the last three weeks of a dog’s nine-week pregnancy and the first four weeks of lactation once her puppies are born, bitches who are not overweight generally should be fed free choice, as much as they can consume.”

Moreover, Dr. Heinze says, it’s important that the diet contains at least 450 to 500 calories a cup. “It’s hard, especially for a large-breed bitch with a lot of puppies, to get sufficient calories if lower-calorie foods are fed.”

When a food is labeled as appropriate for all life stages or for pregnancy and lactation, it will tend to contain the high calorie levels necessary to maintain both the health of the mother and her fetuses and then her young puppies. But even so, it’s not a bad idea to know the calorie concentration, just to be sure. “A lot of times it will be on the label,” Dr. Heinze comments. “Within a year or two, the calorie level will be required to be on the label.”

Until then, she says, if the calorie count is missing from the bag or can, look on the company’s website or call the company directly. “Bitches’ energy requirements really don’t change much until after the 35th day of pregnancy, so when a dog is first pregnant, “the focus should be on maintaining an ideal body condition,” Dr. Heinze notes. When to actually start the high-calorie food needed for pregnancy? “We don’t have a good answer,” she says. “Many people start at around the time of breeding, but definitely by mid pregnancy she should be on the higher-calorie food for pregnant dogs, and during the last few weeks and through week four of nursing — which is peak lactation — she should be fed as much as is needed to maintain an appropriate body condition and even encouraged to eat.”