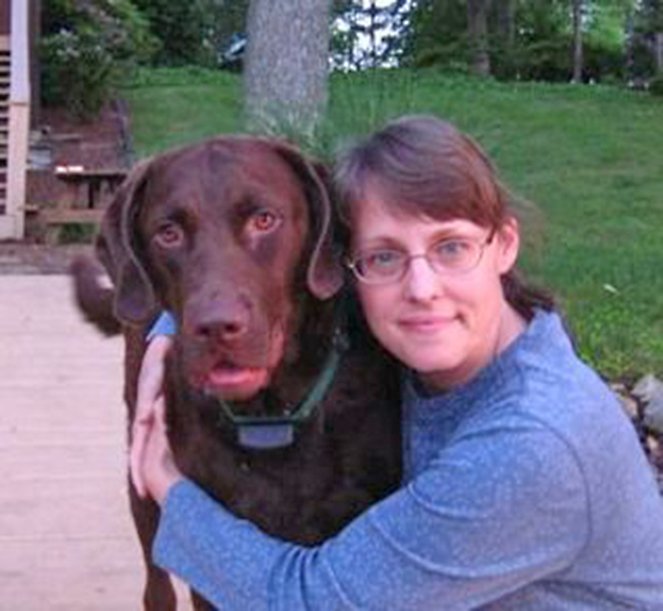 Something was wrong. Active Chesapeake Bay retriever Jameson had only just turned eight but was not picking up one of his back feet all the way. Instead, he was dragging his toe and turning his foot backward and under — onto his “knuckles” — when he stood still.

“We kind of just watched and waited,” says his loving owner Erin Lucks, of Springfield, Virginia. “Maybe he pulled a muscle. Maybe he’s tired. He’ll get over it.”

But he didn’t get over it. “The foot got a little worse, and then the other back paw started doing it,” Ms. Lucks says. “We started noticing all this in the fall. By mid-winter, both paws were flipped under when he was standing still. Jamie’s vet said to keep our eye on this but also suggested we might want to see a veterinary neurologist. He was losing touch with where his feet were, slipping and sliding on his back paws to the point that he was getting bloody toes. I put socks on him, which stopped the bleeding, but the dragging just kept getting worse.”

It was actually the typical scenario for the canine version of Lou Gherig’s disease, a condition that eventually leads to paralysis of the entire body. A dog will start to exhibit wobbliness in the back legs. He will scuff his toes as he walks, or perhaps cross his back legs over each other, sometimes even tripping over them as he tries to go along. From there the illness proceeds slowly, insidiously. The back legs finally become fully paralyzed, and then the front legs become affected. If the disease progresses before the dog is euthanized, the degeneration will spread to the brain — which will cause difficulty swallowing and problems in moving the tongue.

“The overall prevalence of the disease in the canine population is about one in 500,” says Casey Neary, DVM, DACVIM, a veterinary neurologist who works out of the Atlanta branch of Bush Veterinary Neurological Service, the largest veterinary neurology practice in the world. “That’s a small percentage but not small enough to ignore. It’s not like one in 10,000.” With almost 70 million pet dogs in the United States, it means about 140,000 of them have this fatal illness.

When it comes to small breeds, the “Pembroke Welsh corgi is the poster child for the disease,” Dr. Neary says. Small dogs tend to be around 12 when they are diagnosed, large breeds around 8 years old.

There are a number of diseases that can cause the same symptoms as canine Lou Gherig’s disease, known scientifically in dogs as degenerative myelopathy (and in people, as ALS, or amyotrophic lateral sclerosis). These include disc problems, tumors on the spine, and certain inflammatory conditions. So how do you know it’s degenerative myelopathy and not something else?

“If this disease is going to be high on my list of possibilities,” Dr. Neary says, “I want to hear that the dog has been slowing down for a long period of time, perhaps over the course of a year. This is not a dog who was well yesterday and can’t walk today. I’ll also think about whether it’s one of the breeds more commonly afflicted.”

Unfortunately, you can’t make a diagnosis directly. That would take putting the spinal cord under a microscope, which is not possible for a live animal without a high risk of permanently paralyzing the pet. But by ruling out conditions whose symptoms overlap with those of degenerative myelopathy — ruptured disc, spinal tumor, spinal infection, or inflammation — you can make a clinical diagnosis with a high degree of confidence. The way you rule out those other conditions is with magnetic resonance imaging, or MRI. “MRI is a vital tool here,” Dr. Neary says.

But diagnosis doesn’t end there. In 2009, the veterinary community identified the genetic mutation that causes degenerative myelopathy, and “since we’ve identified that gene, we now have a genetic test that can be done with a blood sample or cheek swab,” Dr. Neary says. “If the dog has the mutation, it doesn’t mean she has the disease. But considered together with MRI and the clinical presentation, you can pretty reasonably confirm the presence of the condition.”

Dr. Neary conducted both MRI on Jamie and the genetic test. It turns out his mother was the carrier.

“People always want to know, ‘how long is my dog going to be able to walk?'” Dr. Neary says. “It’s a huge range, most commonly anywhere from 6 to 12 months after diagnosis

but sometimes as many as 20 months.” On average, the smaller the dog, the longer the time until the dog becomes immobile. In one study, German shepherds went for about 16 months until they could no longer walk; corgis, 20 months. It’s an issue, Dr. Neary says, because “a 100-pound German shepherd can’t easily be toted around. So not only does a smaller dog have a longer duration of symptoms, it’s easier to care for a small-breed dog that is immobile.” They can remain in your care longer before you have to make any decisions about euthanasia. Even once urinary incontinence sets in, an owner can express a pet’s bladder. (Stools usually work their way out on their own.) Caring for a non-ambulatory, incontinent dog “is a commitment,” Dr. Neary says, but it can be done, especially if you are able to carry the pet from place to place.

Ms. Lucks certainly went the extra mile with Jamie. At 80 pounds, he couldn’t be carried, and at first that wasn’t a problem. She was able to help him up from a sitting or lying position, and he would be on his way. “But eventually, he got to needing a cart,” she says. He hated it at first but then became what Ms. Lucks calls a carted warrior, chasing balls and whatnot. He loved the mobility the cart gave him.

But aside from a cart, is there anything that can be done to prolong an affected dog’s mobility so that death can be pushed off, whether a large or a small dog? “No treatment has been proven scientifically to slow, and certainly not to stop, the progression of degenerative myelopathy,” Dr. Neary notes. Death from this illness is inevitable, despite the fact that in some circles, nutrition supplements have erroneously been heralded as an effective treatment, as has aminocaproic acid.” Immunosuppressive therapies and steroids, as well as Eastern therapies like acupuncture, have not been shown to slow the progression of the disease, either.

Jamie absolutely loved the water therapy. “I got a little stock watering tank for the backyard,” Ms. Lucks says — “8 feet in diameter, 2 feet deep. I ordered it from a farm supply company. I also got him a swimming vest so he could float and kick in a nearby lake. He loved that. I would have to finally drag him out of the water. He swam like a champ. He could still kick his legs. He just didn’t have any idea where they were, and they couldn’t hold him up on land.” Jamie was also going to Dr. Neary’s office once a week for water therapy.

The good news in all of this, on top of Jamie’s prolonged quality of life: degenerative myelopathy is not painful. A dog will not yelp or show any other signs of pain or discomfort, even toward the end. The issue is strictly more and more difficulty moving.

“Through all of this Jamie had no idea that anything was wrong,” Ms. Lucks says. “He was perfectly happy for a good year and a half.”

Still, says Dr. Neary, “it’s a tough disease to see. When you get it diagnosed, you are preparing your family for the inevitable. Your dog is becoming a pet who’s going to be very difficult to manage at home.

“You won’t lose the dog that weekend. There’s time to say good-bye, and you can at least take comfort in the fact that your dog will not be in any pain. But it’s hard. As a neurologist, I feel a little bit helpless because there’s nothing I can do to cure the animal.”

Ms. Lucks did finally reach the point at which she had to say good-bye. It wasn’t because she had to use piddle pads to catch his urine and also his stools. It wasn’t because she had to learn to express his bladder. She would have done anything for him. It was that a little more than two years after Jamie’s ordeal started, the day after Christmas, “he just said, ‘I’m done,'” as Ms. Lucks puts it. He stopped eating. He kept throwing up. By the next morning, he was even throwing up water.” He was happy and comfortable until the very end, she says. But, having beaten the odds by making it a good two years since he had been diagnosed, he was clear about wanting to say good-bye.

Fortunately, the fate of wonderful dogs like Jamie might change. Research is occurring that could potentially help both dogs and people with this paralyzing disease. (See sidebar on page 6.) “Prior to discovering that degenerative myelopathy in dogs is closely related to ALS in people,” Dr. Neary says, “most of the studies were in mice. But rodents have a very primitive nervous system. To now be able to study dogs with nervous systems similar to ours is only going to help us in studying this condition and its response to therapeutics.”