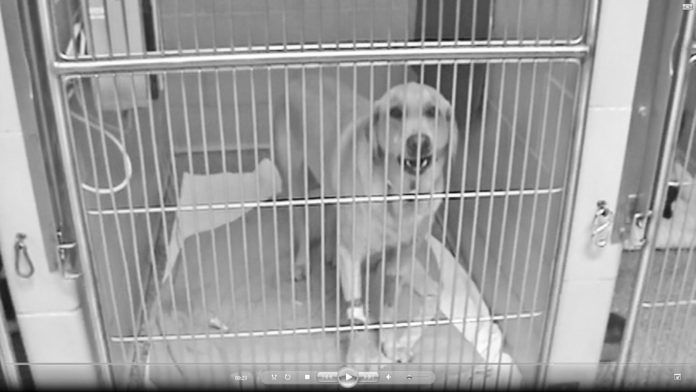 “We can always use drugs to sedate a hospitalized patient whose anxiety is so extreme that it inhibits the dog’s healing or makes it difficult to provide adequate nursing care,” says Tufts veterinarian Claire Sharp, BVMS, who specializes in emergency and critical care medicine. “But we prefer not to if we have a choice,” she adds. “The drugs do quite a good job and are relatively safe, but they render it harder to assess a patient and, in some cases, can decrease the animal’s blood pressure.”

That’s why Dr. Sharp, in conjunction with Michelle Damon, the head technician (read “nurse”) in our small animal hospital’s Intensive Care Unit, decided to see if she could find a non-pharmacologic approach for reducing hospitalized dogs’ stress and agitation. Such a solution would help all dogs in the unit because often, when one is anxious, her panting, pacing, and vocalizations (not loud barking because very sick dogs often don’t have the energy for that) spread the nervousness to other dogs on the ward, only compounding the situation. And such “severely anxious dogs in the hospital are poorly responsive to our attempts to calm them down by talking to them and petting them,” Dr. Sharp says. “They are experiencing too much apprehension about being away from their owners, or being in strange surroundings, or having to undergo a procedure without being able to understand what’s going on.”

Dr. Sharp and Ms. Damon settled on trying the Thundershirt, a jacket placed around a dog’s torso fairly snugly but without restricting her movements. “A lot of people use them not only for dogs who have storm phobia but also anxiety that comes from noise like fireworks or the stress associated with travel or separation,” Dr. Sharp reports. “There is evidence that applying constant pressure to the body can soothe animals as well as people. That’s kind of the theory behind swaddling babies,” Dr. Sharp says. “Wrapping them in a blanket rather snugly calms them.”

The study is ongoing. Each dog enrolled needs the consent of both the veterinarian looking after her as well as the consent of the owner. Ms. Damon takes baseline videotape of the anxious dog’s behavior at 15-minute intervals for an hour to document the level of anxiety, then wraps the Thundershirt around the dog and videotapes her several more times during an additional five hours.

One of the dogs observed to date, a Shih Tzu, had been admitted to the hospital for breathing difficulty associated with heart disease. Once her owners left, she began to vocalize and pace continuously in her cage, which only worsened her symptoms. Because of how delicate her condition was, a sedative was not even an option. But within five minutes of being fitted with a Thundershirt, she settled down and slept. Afterwards, she exhibited very minor breakthrough anxiety but was so calm most of the time that her owner purchased a Thundershirt to manage her anxiety at home.

Another dog, a six-year-old Lab who came in for vomiting and decreased appetite, was so upset he kept panting and jumping at the door of the run. It turned out he had an intestinal obstruction. The doctors wanted to try to avoid performing a surgery and instead put the dog on intravenous fluids and medications to help with nausea and vomiting. That only made him more anxious, but 15 minutes after he was dressed in the Thundershirt, he lay down to go to sleep. He experienced a brief period of anxiety when his shirt had to be removed for an ultrasound, but otherwise he remained anxiety-free throughout his hospital stay (and was discharged two days later without needing the operation).

The results thus far “have been very promising,” Dr. Sharp says. “There has been a really profound level of improvement in dogs’ level of anxiety when the Thundershirt was put on them” — so much so that in all cases thus far, the veterinarians and nurses taking care of the dogs chose to leave the Thundershirts on them for the entire duration of their hospitalizations. And the dogs did not need any drugs. Their anxiety was that well controlled.

“The ICU is a really public area of the hospital,” Dr. Sharp says, “with different staff members going in and out all the time. Lots of them have seen the dogs in their ‘before’ and ‘after’ states and are excited about the improvement in their levels of stress and agitation. The owners are also excited,” Dr. Sharp says, “because it’s a pretty benign intervention for the dog.”

The Tufts researchers have only observed a few dogs so far and look forward to testing the Thundershirt on more patients “to get some meaningful numbers,” Dr. Sharp states. “It’s important,” she says, “because the challenging thing with something like this is that those in academia may look at it as voo-doo medicine. You can always find lots of information on a website that offers testimonials from people about how their dogs benefited, but that’s biased information coming from those with a vested interest. We are doing this scientifically so that what we find will have validity in the research community.”