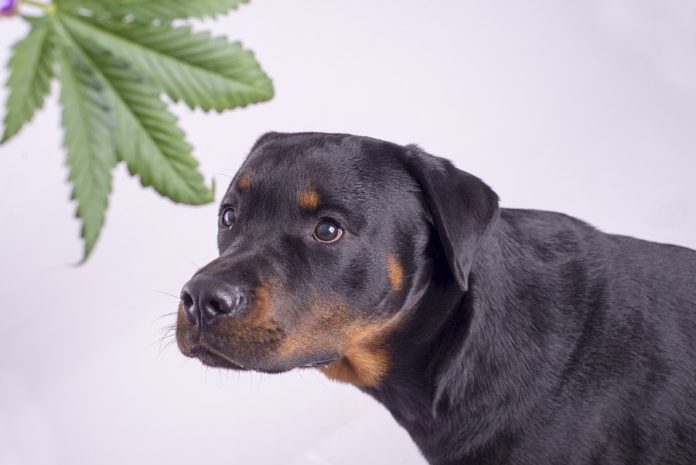 Although marijuana, or cannabis, is classified as a Schedule 1 substance by the federal government, meaning it has a high potential for abuse, as of last October, 29 states and the District of Columbia had laws legalizing it in some form. It has been studied for its therapeutic effects on chronic pain, chemotherapy-induced nausea and vomiting, irritable bowel syndrome, epileptic seizures, anxiety, depression, sleep disorders, and a number of other ailments. As more people experience the apparent medical benefits of cannabis, many dog owners are left wondering if the drug might be useful in treating various diseases in veterinary medicine, too.

“When it became legal in Colorado, we got an influx of telephone calls from local veterinarians and clients inquiring into using cannabis for their pets,” says Stephanie McGrath, MS, DVM, DACVIM (Neurology), assistant professor at Colorado State University College of Veterinary Medicine and Biomedical Sciences. “Because now, of course, we had people who were getting medical marijuana for themselves, and oftentimes finding it to be helpful for their ailments…so why not give it to their pets?”

The problem is that it has been proven that THC (tetrahydrocannabinal) — the psychotropic compound in cannabis responsible for the “high” of marijuana — is toxic to dogs in much lower concentrations than it is for people. That’s why Dr. McGrath and her colleagues were interested in testing another compound in the cannabis plant on dogs. Called CBD (cannabidiol) it’s non-psychotropic. There’s no “high.”

Phase 1: Is CBD safe for dogs?

Before Dr. McGrath could test CBD on client-owned dogs, she had to determine if it was safe and, if so, in what forms and at what doses. Her Phase 1 study tested the safety and toxicity of CBD on canine patients, in addition to its pharmacokinetics (the movement of the drug within the body). Thirty healthy dogs were randomly assigned to receive various doses and delivery methods of CBD for six weeks.

The research revealed that of the three delivery methods, oil tinctures resulted in the highest and most stable bloodstream concentrations. It also revealed that the high dosages of CBD came with some side effects, including elevations in liver enzymes (but with no clinical evidence of liver disease). In addition, all 30 dogs developed diarrhea during various times of the study.

But the two levels of dosing were much higher than dogs would actually be given to treat illness. “To be fair, we were using higher dosages than we would expect to use clinically, since it was a safety and toxicity study,” explains Dr. McGrath.

The fact that CBD was, for all intents and purposes, tolerable for dogs and also measurable allowed her to obtain approval to conduct the first-ever cannabis clinical trials on client-owned dogs.

In late 2016, two CBD clinical trials on client-owned dogs began at Colorado State University — one in dogs with epilepsy, the other in dogs with osteoarthritis. Both studies are placebo-controlled and double-blinded. That is, they are gold-standard studies in which neither the pet owners nor the researchers know which dogs are receiving the placebo and which are receiving the CBD.

The goal of the epilepsy trial is to determine if CBD reduces seizure activity in epileptic dogs who are on standard anticonvulsant therapy but whose seizures remain poorly controlled. It is believed that medical marijuana might help inhibit seizures by binding to certain central nervous system receptors. It’s also thought to act as an anticonvulsant by leading to a decrease in an excitatory neurotransmitter (brain messenger) called glutamate. The hypothesis is that an overproduction of glutamate might contribute to a triggering of seizure activity. At least one other mechanism is believed to come into play, too. Whatever the effect, it has already been shown in rodent models that CBD has anti-seizure effects.

All participants (34 dogs in total) are going through a 12-week period either on placebo or 2.5 milligrams of CBD per kilogram of body weight, twice daily.

The goal of the osteoarthritis trial is to determine if CBD reduces pain associated with the disease. It’s thought that this substance might have anti-inflammatory as well as analgesic (pain-reducing) benefits.

To be included in the study, dogs must present with visually identifiable lameness in any or all limbs, have had a radiographically confirmed diagnosis of osteoarthritis, and have been on a conventional pain management protocol. Unlike the epilepsy trial, the osteoarthritis trial is a crossover study, so each participant receives the CBD or the placebo for 6 weeks, and then the opposite for 6 weeks. There are 24 dogs in this study.

Study results won’t be available until the end of the year, but some preliminary observations look promising. Dr. McGrath says none of the dogs have developed diarrhea or other severe adverse side effects. And S. David Moche, co-founder and CEO of Applied Basic Science Corporation (ABSC), funder of the studies and creator of the CBD products used by Colorado State University, says many of the dog owners who have already completed their 12 weeks have elected to purchase the CBD product on their own, which suggests, at least anecdotally, a benefit.

Dr. McGrath, herself the owner of a geriatric dog with osteoarthritis, is waiting for hard proof rather than anecdotal reports — and more studies. She and her team have recently begun a larger, three-year epilepsy-and-CBD study, which is being funded by a grant from the American Kennel Club’s Canine Health Foundation. She also hopes to study the effects of CBD on other conditions, including chronic neuropathic pain (for dogs with sciatica or bulging or slipped discs), anxiety, and various cancers—both on the cancers themselves and as an appetite stimulant for dogs undergoing cancer treatments.

“Whether it will be effective for the diseases we’re studying, I honestly don’t know,” she said. “As a scientist, I need that evidence to feel comfortable before recommending it to pet owners.”