Lymphoma is one of the most common cancers to befall dogs, accounting for somewhere between 10 and 20 percent of all canine cancers in the United States. It’s also one of the more difficult cancers to deal with in that it generally is assumed to have spread throughout the body by the time it is diagnosed. Why?

Lymphoma is a cancer of the lymphocytes — cells that are part of the extensive immune system and, as such, travel freely through the body. Thus, when lymphoma occurs, the cancerous cells have ready access to all parts of a dog’s body by traveling throughout the lymphatic system. With time the malignancy can affect major organs.

Chemotherapy is the recommended treatment since, unlike radiation, it reaches everywhere, not just one targeted piece of tissue or organ. It is well tolerated by most dogs, but it may not be the right choice for all dog “parents.” Standard chemotherapy treatments involve frequent vet visits and can be costly, totaling $6,000 to $8,000 for those who do not have pet insurance. There is, however, a new alternative to standard chemotherapy.

Chemotherapy pills can now be given by a dog’s family

The Food and Drug Administration (FDA) has recently given conditional approval to a chemotherapy drug called verdinexor (trade name Laverdia) that costs only a few hundred dollars a month (plus the cost of blood work and overall monitoring). And it can be given in pill form right in your home. “Conditional” in FDA parlance means the pharmaceutical company that developed the drug has 5 years to confirm its efficacy and also that in the meantime, the medicine cannot be used off-label to treat any other kind of malignancy.

In research to date, almost 30 percent of dogs given the oral chemotherapy showed no progression of lymphoma for at least 2 months. About 5 percent of the dogs showed no progression for at least 6 months. Further, one third of the dogs had what is known as stable disease — reductions of at least 30 percent in the size of their lymph nodes. One dog’s lymph nodes even returned to normal, non-disease size.

A comparison to traditional chemo 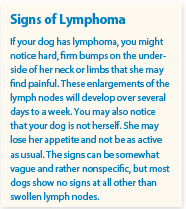 chemotherapy, which much of the time gives a dog in the neighborhood of 12 good-quality months, sometimes longer, with as many as one in four dogs still alive after 2 years. Thus, the new drug cannot be considered the standard of care.

That said, for people who can’t afford traditional chemotherapy or who cannot get to the vet’s office frequently enough for traditional chemo — or who want something while they are waiting for an appointment with a veterinary oncologist — verdinexor at least provides the opportunity to give a dog several good months.

It’s a step in the right direction. Administration of this medication will still require periodic blood draws and clinical check-ups as there can be side effects. But, says Tufts veterinary oncologist Carrie Wood, DVM, “Verdinexor offers a new opportunity for treatment and hopefully more time at home for people who have dogs with lymphoma.”

Note:  Pregnant women, women who may become pregnant, and nursing women should not handle or administer verdinexor or touch the feces, urine, vomit, or saliva of treated dogs. Nor should children. Those who do give the pill should wear gloves that have been tested for use with chemothera-
peutic agents.