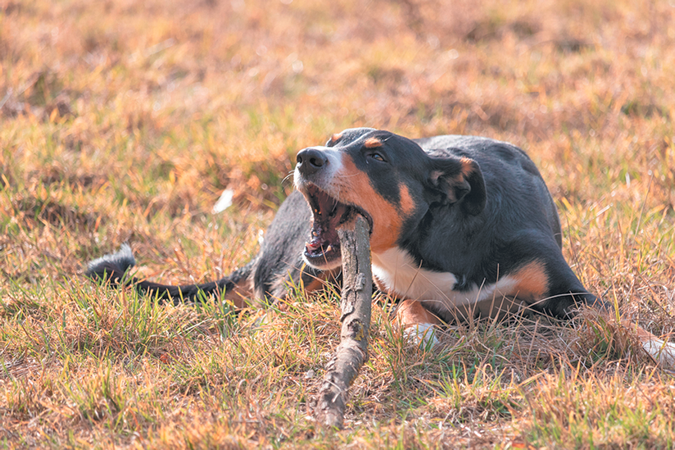 “It’s young dogs who are most inclined to swallow things,” Dr. Berg says. “It’s important to be vigilant about this early in a dog’s life. They are curious about the world and investigate with their mouths, which is what gets them into trouble.” That said, he notes that some older dogs are also prone to swallowing objects they shouldn’t and will sometimes do it again and again. “A dog will not learn from his experience in this regard,” the doctor says.

Here’s a list of items that are dangerous to swallow, followed by a list of objects that are very dangerous. If your dog ingests one of these objects, it requires an urgent visit to the emergency room, where the veterinarian will make a decision about appropriate treatment. Many foreign bodies in the gastrointestinal tract will pass on their own, so monitoring is often an option. In other cases, removal by endoscopy or surgery may be necessary. If you don’t know whether your dog has swallowed something he shouldn’t, classic signs of GI obstruction include persistent vomiting, drooling more than usual (a sign of nausea), loss of interest in eating, diarrhea and lethargic behavior.

Cloth items. Since dogs like their owner’s scent, it should come as no surprise that they end up mouthing dirty laundry like socks, underwear, and pantyhose. They can gulp them down whole and cause obstructions in either the stomach or intestines. Keep your dirty clothes off the floor, and use a hamper with a secure lid.

Plastic meat wrap. “Dogs will fish it out of the trash,” Dr. Berg cautions. Like cloth material, it can cause GI obstructions. Make sure there’s no access to the contents of the garbage can.

Discrete objects. This is a long list that includes all the things mentioned previously, in addition to corn cob segments, the nipples on baby bottles, the pits of stone fruits, and plastic items like squeaky toys. Larger items like wads of fabric tend to remain in the stomach, while smaller ones like rocks often pass through the stomach but then get stuck in the small intestine.

String-like objects. Veterinarians call them linear foreign bodies, and they include string used to wrap meat. “Strings tend to be more of a cat problem,” Dr. Berg acknowledges, “but the rules for species are not hard and fast.” And a string can literally saw through the intestine and cause a perforation.

Wood glue. If a dog swallows a large quantity of white-colored wood glue, it can swell in the stomach as it hardens, forming into a large ball that cannot pass from the stomach to the small intestine. If it gets too big, surgery is the only option.

Post-1982 pennies. Starting in 1982, the federal government stopped making pennies solely out of copper and started using a copper-zinc combination. And zinc corrodes in stomach acid, so a dog could get zinc toxicity. That can lead to a gastric ulcer and, in some cases, kidney failure. (Note: Even though pennies are small, they may not quickly pass out of the body on their own. Because they’re heavy, they often float to the bottom of the stomach, like falling to the bottom of a pool, and stay there without moving any further along the digestive tract.)

Small magnets. There are magnets called Buckyballs — little round ones that people use as a desk ornament, stacking them into different shapes. These are apt to be swallowed by dogs, as are children’s toys with little magnets. If a dog swallows multiple magnets, which does happen, they can attract one another across multiple intestinal wall sections, pinching pieces of intestine and potentially causing perforation of the intestinal wall.

Sticks. When a dog chews a stick and it breaks off into splinters, one or more of them can pass through the lining of the mouth and migrate from there into the neck, or somewhere else in the head or face, and cause an infection serious enough to require surgery. The surgery is not to retract the splinter, which often dissolves. It’s to open the abscess left behind to let the infection drain.

Many dogs chew sticks their whole lives and never have a problem. “But we commonly see dogs who get infections from stick chewing,” Dr. Berg says. “And it’s not just a puppy thing. Some dogs never grow out of chewing sticks.”

Teriyaki sticks. The long wooden sticks that are used to make kabobs are very dangerous to dogs. The smell of meat that remains after the stick is used for cooking tempts dogs to swallow the sticks whole. A stick can then become wedged inside the stomach and potentially poke through the stomach wall and pass into the abdomen or chest, requiring surgical removal.

We will discuss chewing/swallowing of bones in the January issue. 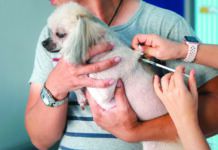 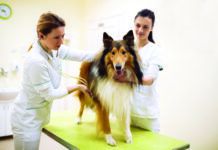 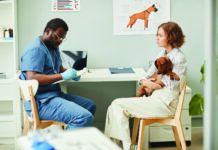