We once had a client who thought he was causing his dog to urinate in the house because she was picking up on his anxiety and depression. The man had lost his job and thought maybe his best “girl” was responding to his mood and therefore not even bothering to wait to pee until she got outside.

He tried limiting her water, but that didn’t help. He was beside himself, thinking he might have to put her down — she was already 14 — and feeling all the worse because he blamed himself for her indoor urination. But he brought her to our clinic — no small thing because money was now especially tight. The good news: the dog’s problem was completely fixable, and the solution was relatively inexpensive.

Making a diagnosis
It turned out the man’s dog was not urinating on purpose. That is, she did not feel the urge to void and decide it wasn’t worth waiting until she got outside. Urine simply dribbled out passively while she was lying down, often while she was asleep. The man would find little puddles where his pet had been resting.

That was key to diagnosing her condition. If you see your dog actually posturing to urinate indoors, it could be a behavioral issue — she is upset or confused about something — or a medical condition such as a urinary tract infection, diabetes, or Cushing’s syndrome. With certain diseases, a dog feels the urge to urinate more and does so — usually waiting until she gets outside. But if urine is trickling out without the dog’s posturing or trying to go, even while she sleeps, the problem is most likely urinary incontinence. Urinary continence is also a good possibility if your dog’s rear quarters or her side become wet with urine.

Dobermans and giant schnauzers seem to be the breeds most typically affected, but urinary incontinence can strike any female dog who has been spayed.

The problem is not about an anatomical abnormality. Rather, it’s almost always about a loss of estrogen. When a dog is spayed, the removal of her ovaries causes a steep drop in that hormone. The less estrogen, the lower the tone of the sphincter muscle in the urethra, the “tube” that extends from the bladder to the outside of the body. That’s why the accidents happen. Muscle tone becomes even lower still while a dog is sleeping, which is why the trickling out of urine often occurs then.

Urinary incontinence can do more than ruin your floors. It can make a dog more likely to develop urinary tract infections. The weakened sphincter allows infectious bacteria to more easily make their way up into the urethra. And lying in a puddle of wet urine makes it easier for bacteria to spread. In addition, urinary incontinence can cause urine scald in some cases. That’s skin that becomes inflamed and can even become infected — the urine can prove very irritating to a dog’s skin.

Treatment solutions
Many dogs with urinary incontinence are otherwise in excellent health, as was the 14-year-old dog belonging to the distraught man. All she needed was a drug to do the job of the estrogen that was missing. It comes either in the form of phenylpropanolamine (PPA) or an actual estrogen compound to replace the missing hormone.

Phenylpropanolamine is the same drug that used to be found in a number of over-the-counter cold medicines for people. It was taken off the market by many companies some years ago because it was associated with a slight increase in the risk for stroke among women. But it is still available for veterinary use, and it’s usually quite effective.

One disadvantage is that at high doses, it can make a dog hyper-excitable or at least anxious, which makes sense when you consider that it’s to some degree chemically related to amphetamines. PPA may also slightly raise an animal’s blood pressure (which may be the reason for the higher risk for stroke observed in women). That’s why veterinarians often require that a dog on this drug come in for periodic blood pressure checks before refilling a prescription. (The drug has to be given every single day, sometimes more than once a day, for the rest of a dog’s life in order to control the condition; it has a very short half life.) The vet may not want to prescribe it at all if a dog has another condition that might make for abnormal blood pressure, such as heart disease, kidney disease, diabetes, or Cushing’s syndrome.

It’s in those cases that an estrogen compound will be prescribed instead. Often, the compound chosen is diethylstilbestrol (DES). It comes in a very small tablet that’s easily administered. The vet will start with a loading dose, then scale back after a number of days to the minimum needed to keep the dog from piddling without knowing it. The minimum is important because in rare cases, too-high doses of estrogen can bring on suppression of the bone marrow, which produces the red blood cells that carry oxygen to all the tissues of the body. In addition, too much estrogen can have the added effect of making a dog act as though she is coming into heat. Some owners have to give the drug only once every two weeks, but it’s usually not more than twice a week.

Another veterinary estrogen product that may be prescribed is estriol (Incurin). Given daily, it has the same potential side effects as DES.

In the rare cases that drugs don’t work
If medication fails to keep the dog from dribbling urine, or a dog cannot tolerate the drug for whatever reason, surgery may be considered. One surgical procedure is called a colposuspension; the vagina is pulled forward and attached to the body wall. During that process, the bladder and urethra move, too. That causes pressure at the junction where the bladder and the urethra meet. Since that particular juncture is also where the sphincter is, the greater pressure helps with continence — the dog feels the urge to go and can urinate appropriately rather than have the urine leave her body without her say-so. A colposuspension helps more than half the dogs who undergo the operation. Sometimes, the procedure eliminates incontinence completely.

Still another treatment involves surgically placing a cuff around the urethra, which is another way of tightening things up there. The cuff is called a hydraulic occluder. It is attached to tubing that connects to a small port placed under the skin. This allows the cuff to be inflated with saline to increase the pressure around the urethra, if needed.

When medical and surgical options fail
If neither drugs nor surgery ameliorates urinary incontinence, you can at least make living with the problem easier. One way is to buy diapers designed specifically for pets. Even pull-up diapers for human babies can work well and might prove less expensive (although you might have to cut a hole for the tail). And just like for babies, a diaper won’t only keep the urine off your carpets and wood floors; it will wick away urine and protect from infection. Instead of warding off diaper rash, you’re protecting from urine scald.

Admittedly, some dogs will not tolerate a diaper. They rip it off. If that’s the case, you can at least purchase flat pads that also wick away urine. You can keep them in your pet’s bed or in her favorite spots for lying around in. There are even companies that make hammock-like beds on short legs just a few inches off the ground. They appear solid but have many tiny holes in them that allow urine to pass through. They protect the dog from scald, and you can protect your floor by putting a tray underneath the bed to catch the dribble. 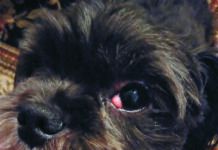 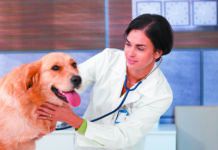