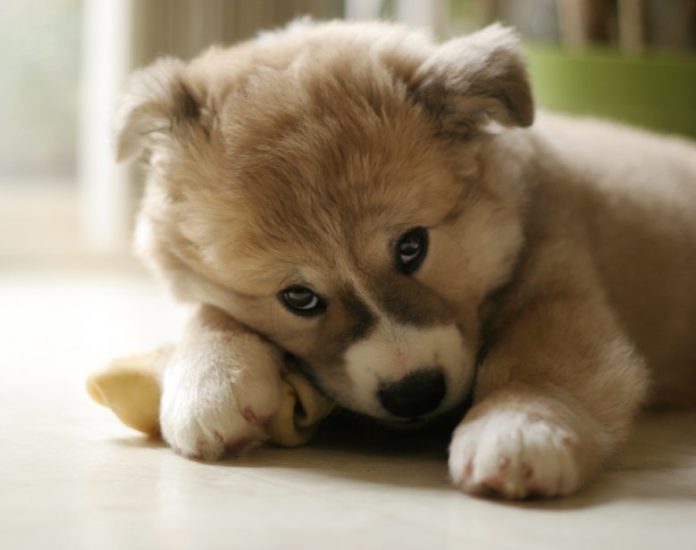 As many people have learned the hard way, a hernia is a defect in a body wall that allows a structure to move from where it’s supposed to be to where it doesn’t belong. In the case of a hiatal hernia, a little piece of the stomach moves up from the abdominal cavity into the chest cavity due to a defect in the diaphragm, a tough sheet of muscle that normally separates the abdomen from the chest. Thus, the chronic heartburn experienced by some people with the condition. A hiatal hernia is a type of diaphragmatic hernia because the problem stems from a diaphragmatic abnormality.

In dogs, car accidents can cause diaphragmatic hernias in which one or more of the organs normally secured in the abdomen migrate through the torn diaphragm into the chest, which is supposed to house only the heart, lungs, esophagus, and trachea. With dogs, the migrating abdominal organ is usually the liver or spleen, although sometimes the stomach, or even the small intestine, ends up passing through to the other side.

There are also inguinal hernias, also occasionally the result of a male dog’s getting hit by a car. The inguinal canal is a passageway through which the spermatic cords pass from the abdomen to each testicle. But an accident can cause the abdominal wall to tear open at that location. The canal becomes enlarged — think of a hole getting bigger once there’s a tear — and abdominal organs can herniate through the opening.

“These are true, major hernias that need to be fixed,” says Tufts veterinary surgeon John Berg, DVM, who serves as Your Dog’s editor-in-chief. The animal cannot function normally without an operation to repair the hernia. A dog may become lame from an inguinal hernia, for instance (there’s bulky tissue between the legs that isn’t supposed to be there), or might not be able to breathe properly as the result of a diaphragmatic hernia; the lungs don’t have the room to expand with the liver taking up space in the chest cavity. In addition, sometimes herniated organs can lose their blood supply — think of the blood vessels that feed the organ becoming stretched and twisted — and unable to perform their life-sustaining functions.

What is an umbilical hernia?

In fetal life, for dogs as for people, nourishment is carried from the mother to the unborn fetus through the umbilical cord, which passes through a small hole in the abdominal wall of the fetus. But once the baby is born, that blood supply is no longer needed. The doctor puts a clamp on the cord, which contains all the blood vessels through which nutrients and other essential substances traveled from mother to fetus during pregnancy, and cuts it off, leaving just a stump that withers away on its own. The upshot: a belly button on the midline of the stomach, which in people can have a variety of shapes — an “innie,” an “outie,” round, oblong, and so on.

However, belly buttons are much less prominent in dogs. “Usually what’s left,” says Dr. Berg, “is just a tiny little scar that you can’t even see unless you shave the puppy. Most people can’t even feel it. You kind of have to search for it,” he says.

But in some cases, instead of closing up, the hole in the abdominal wall stays open. That’s an umbilical hernia. In theory, it means abdominal contents herniate through to the outside. “In reality, we hardly ever see a true hernia like that,” says Dr. Berg. “What we tend to occasionally see instead,” he comments, “is a dog who has a little fat right under the skin surface. It’s probably a remnant of the fat that accompanied the blood vessels attaching mother to fetus during pregnancy. There’s no actual hole at the site of the belly button.”

Unless it’s a short-haired dog, most owners don’t even realize an umbilical hernia is there. Only if it’s, say, a greyhound might they notice the little “pouch” at the site. That’s where an owner might get nervous, Dr. Berg says, and go on the Internet to learn it’s an umbilical hernia and that the dog has to have surgery.

“It almost never does,” he remarks. Nothing bad will happen if it isn’t tended to, although for strictly cosmetic reasons, a surgeon can easily fix the hernia by taking out the tiny bit of fat while performing a spay or neuter.

Exception to the rule

On very rare occasions, Dr. Berg points out, umbilical hernias are, strictly speaking, true hernias. There’s an actual hole in the body wall with tissue passing through from the abdomen and lying just beneath the skin. Again, it’s usually just fat.

“One sign that the hernia might be an actual hernia,” Dr. Berg says, “is that the pouchiness seems to come and go, implying that the fat under the skin is able to slide back and forth through the hole. Also, your vet may be able to “reduce” the hernia — or push the fat back into the abdomen by pressing the skin with her finger. This won’t be painful to your dog.

It’s a good idea to repair a true umbilical hernia but even then, says Dr. Berg, “I have yet to see in my life a consequential umbilical hernia, where intestinal contents herniated through the abdominal wall or something like that. It does happen on exceedingly rare occasions,” he notes, “but for the most part umbilical hernias in dogs are harmless.”

Even if your veterinarian does recommend that an umbilical hernia be repaired, “the surgery couldn’t be more minor,” Dr. Berg says. “We remove the fat, a purely aesthetic issue, and if the fat is accompanied by a defect in the wall of the abdominal cavity, we close it with a couple of sutures. It takes 15 minutes, or adds about that amount of time to a spay or neuter.”

The bottom line: whether or not surgery is recommended to repair an umbilical hernia, cross that condition off your list of worries.