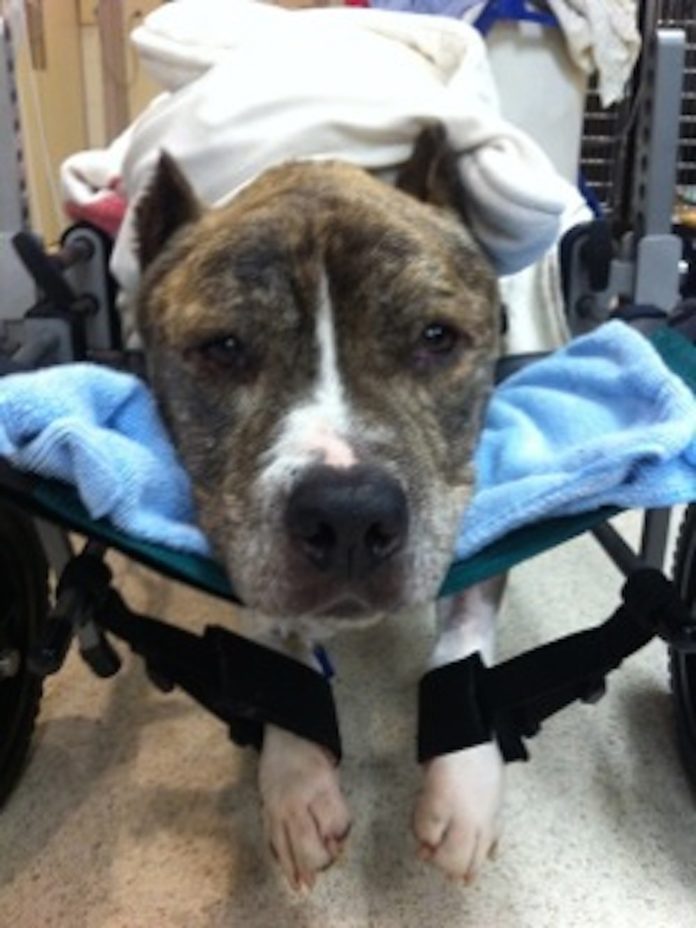 As if suffering from hypothyroidism and osteoarthritis of the shoulders, elbows, and knees weren’t enough, Dirty, a 13-year-old pit bull, had now been diagnosed with Wobblers Syndrome — a painful neurological disease affecting the neck area of a dog’s spine. No wonder the Louisiana dog seemed sullen when he first arrived for treatment at the Mississippi State University College of Veterinary Medicine.

Wobblers Syndrome is the result of a compressed spinal cord, either from overgrowth of bone or ligaments or a herniated (bulging) disc. The telltale signs are a characteristic wobbly gait and holding the head down, with an outstretched neck. Unfortunately, the condition usually goes unnoticed until it’s far along.

How Wobblers hobbles; which breeds are affected

All the play bows, laps of water from a bowl, and rollovers and flips of a dog’s day are made possible by his spine, a miraculous stretch of vertebrae, or bones, each cushioned by gel-like discs. Threaded through the vertebrae is the spinal cord, which serves as a conduit for messages between the brain and the rest of the body, making possible so many of a dog’s movements. Just behind the skull are the cervical vertebrae, or bones of the neck, which are listed sequentially from C1 through C7, with “C” standing for “cervical.” (“T” stands for the middle, or thoracic, spine, and “L” stands for the lumbar spine near the bottom of the back.)

It is the cervical spine area that is compromised in Wobblers Syndrome. Spinal nerves are damaged by spinal cord compression, making it difficult for the spinal cord machinery to effectively pass information back and forth between the brain and the body — hence, difficulty with walking that can even progress to full paralysis.

Large and giant breeds are most often affected (though pit bull Dirty shows that no breed is immune). An estimated 4 percent of Great Danes and 5 to 6 percent of Doberman pinschers are diagnosed with the disease. Gender plays a role, too, with males more likely to develop the condition than females. Other breeds more likely than others to develop Wobblers Syndrome include, but are not limited to, the Basset hound, mastiff, boxer, Dalmatian, Old English sheepdog, German shepherd, greyhound, St. Bernard, Samoyed, Rhodesian ridgeback, Newfoundland, and Weimaraner.

Great Danes usually show symptoms by their third year of life. The canal in the middle of the vertebrae, through which the spinal cord is threaded, presses in and changes its round shape over time in the C4 through C6 area. The canal often takes on an hour-glass shape rather than the healthy cylindrical one, suggesting a genetic predisposition.

Dobermans tend to develop Wobblers in their middle to older years, or about age 7, due to bulging or herniated discs in the C5 to C7 area.

Symptoms of Wobblers Syndrome can come on slowly — but then hit a tipping point that owners can detect. Difficulty with coordination of movement is often noticed first, particularly in the rear limbs; the undue pressure on nerves in the cervical area of the spine causes problems far away from the neck. Dogs with Wobblers may take long strides with their hind legs, and walk or stand with all four limbs held far apart, creating the wobbling walk. Front legs may not show symptoms at all or may make noticeably shorter steps than those of the hind legs. The toes of the back paws may drag on the ground while the dog is walking.

Not surprisingly, neck pain can be significant and muscle spasms can result from lifting the head, which should not be forced. In fact, because of this significant discomfort, dogs with Wobblers should not have pressure applied to this area; a harness should be worn instead of a neck collar.

Wobblers by any other name…

“‘Wobblers’ is a hangover description term from 75 years ago when we had no idea what the problem actually was,” says Tufts veterinary surgeon John Berg, DVM. Today, there are more than a dozen terms used in veterinary literature to refer to the syndrome. “The more official term is cervical spondylotic myelopathy, and the more trendy terms to describe the two variants of the condition are osseous-associated and disk-associated Wobblers Syndrome,” says Andy Shores, DVM, MS, PhD, DACVIM (Neurology) and Clinical Professor and Service Chief, Neurosurgery/Neurology, at the Mississippi State University College of Veterinary Medicine, a surgeon who was brought in on Dirty’s complicated case.

Roughly translated, cervicalspondylotic myelopathy means degenerative disease of the neck vertebrae, or bones. Of the two variants, osseous, or bone-associated Wobblers Syndrome, is the kind Great Danes develop. Doberman pinschers are more likely to develop Wobblers from bulging, slipped, or herniated discs pressing on the spinal cord. While the osseous-associated Wobblers may have a heredity component, a diet too high in protein has also been thought to be a factor.

“I am not sure if we will ever know beyond a doubt what roles genetics and nutrition play in the development of Wobblers Syndrome,” says Dr. Shores. But a too nutrient-dense diet, particularly one high in protein in a giant breed’s earliest years, has been thought to cause bone growth that outstrips the growth of muscles, tendons, and ligaments, causing a discrepancy that becomes evident after a lengthy period. For that reason, it would be best to check with your veterinarian about choosing an appropriate food for your large or giant breed puppy. Dog food appropriate for giant breed dogs is less nutrient-dense than other puppy foods, in part because giant breeds take 18 months to fully go through puppyhood, while other breeds take only a year or so.

“Early recognition of even subtle gait changes, clumsiness, and a lower carriage of the head should alert the owner,” says Dr. Shores. That leads the way to “an earlier diagnosis, which allows the specialist to design a plan and, I believe, improves the long-term prognosis.” For instance, a lack of financial resources might call for the use of more conservative treatment to at least stabilize and lessen the pain of the affected dog prior to more aggressive treatment, such as surgery, once financial arrangements have been made. But there are also, unfortunately, instances in which there is no time to wait on acting aggressively, usually due to a sudden injury to the spine.

If physical examination warrants it, any one of a variety of tests might be used to confirm diagnosis. An x-ray would show if an area of the spine has narrowed or if the bones are out of alignment. A myelogram, in which contrast material is injected into the area around the spinal cord and nerve roots, provides a more detailed view. CT scans may be conducted, but magnetic resonance imaging, or MRI, is considered the most effective at providing answers about the type of spinal cord compression and how much damage is involved (although it is among the most expensive imaging techniques).

When possible, Wobblers Syndrome treatment can incorporate the use of prednisone, a steroid; a non-steroid medication; and a muscle relaxant while the dog remains in an enclosed setting. If the dog moves about too much, that can compromise treatment.

But it should be noted that the consistent pain involved in Wobblers may well require surgical intervention, if not right away then eventually, followed by rest and then rehabilitation. The good news here is that surgical success is in the 70 to 90 percent range, with chances likely improved by appropriate post-operative rehabilitation.

“To decide on a treatment, or at least which treatment to start with, you have to identify what the owner considers an acceptable level of function and what the doctor and owner agree constitutes a good quality of life based on the patient and any additional health issues the pet may have,” says Dr. Shores. In other words, sometimes conservative treatments may not solve the problem entirely, but they can get the dog back to a decent place. In any event, Dr. Shores comments, “much can be done for these patients, and the key (as with any disease) is an early diagnosis,” which would likely require a less aggressive form of treatment.

dorsal laminectomy, which involves a surgical widening of the cervical canal when its shape is compressing the naturally round contour of the spinal cord.

distraction-stabilization, which surgically “distracts” the bones to stretch ligaments and thereby takes pressure off the spinal cord, followed by “stabilizing” with implants and bone fusion.

Your doctor can help you understand whether the damage to your dog’s nerves is irreversible, in which case you may prefer not to put him through surgery with several months of rehabilitative therapy and crating to follow. Such a dismal prognosis is rare, but it does happen.

Success even in a complicated scenario

In Dirty’s case, mobility had been largely lost for about a month prior to his introduction to Dr. Shores, whose first endeavor was to surgically decompress his spinal cord via dorsal laminectomy over three different spinal sites. “After his intial recovery time, tremendous effort was put to improving Dirty’s joint mobility as he regained some of his neurologic functions,” Dr. Shores reports.

Daily care and therapy, which also included remobilizing atrophied muscles, included passive range of motion exercises, laser stimulus (similar to acupuncture, but without needles), time in the infinity pool, and eventually underwater treadmill excursions. These “helped to bring Dirty back to his former self,” says Dr. Shores.

Dr. Shores and staff knew that Dirty’s road to recovery would be a long one. What kept them going, as in all chronic cases, was seeing the small improvements each week, which provided encouragement. “Today, he is running and enjoying his life back in Louisiana. Recent videos sent from the owners show him running, chasing a ball, and rolling back and forth on the ground. He belies his age in the videos we have seen,” says Dr. Shores. “We have no question that his quality of life is good.”