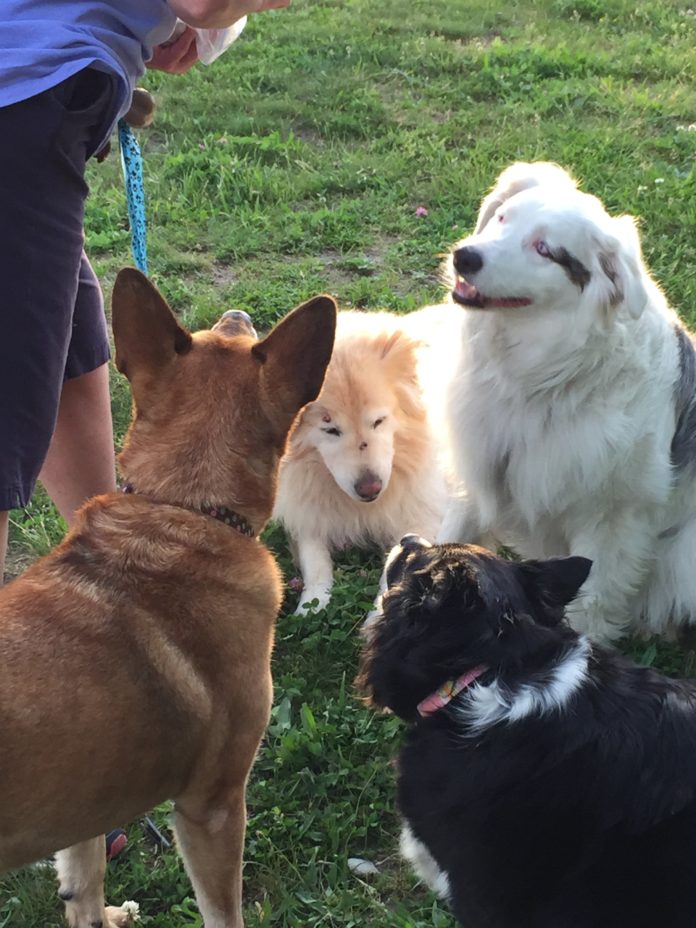 Jane Derosiers of Weymouth, Massachuetts, usually avoids the busy front entrance of her local dog park. It’s not that she minds the rollicking meet-up of dogs glad to see each other for their nightly romp, accompanied by their biscuit-toting parents. It’s because her double merle, Lawson, is blind and cannot easily navigate the many barks and bumps of their greetings. That’s why Ms. Derosiers enters by the quieter side entrance, where fewer dogs make the raucous hellos more manageable. It’s one of the minor tweaks, along with childproofing her home, that Ms. Derosiers has incorporated into her lifestyle to make day-to-day living navigable for Lawson. His housemate, 14-year-old golden retriever Evie, doesn’t mind a bit.

“I never had a special needs dog before Lawson, and I don’t like to use that term because I think it was really for me to learn more about him and what he was capable of rather than what he couldn’t do. And there is almost nothing he can’t do,” says Ms. Derosiers, a self-described “foster fail” who adopted Lawson forever after she and Evie fell in love with him when he was placed in their home for a supposedly temporary stay.

Lawson’s back story is a sad one, as many shelter dogs’ stories are. Found on the side of an Alabama road, the two-year-old seemed to have been well-cared for and was likely grieving the loss of his owner. But at a local shelter that took him in, he was no doubt stressed by the rounds of barking that are part of routine shelter life but easier for sighted dogs to deal with. That led to a precipitous weight loss that made it clear he could not remain in a shelter setting. Lawson’s plight moved Ms. Derosiers, and she acted on her compassion, never looking back.

Besides childproofing her home and keeping its layout consistently free of unexpected obstacles, Ms. Derosiers has made sure never to re-traumatize Lawson by placing him in a boarding situation when she’s away, forcing him to navigate blind in a completely new setting. Instead, she has a friend sleep over for the night.

Golden Evie wouldn’t have things any other way. Lawson was the perfect antidote to her recent loss of another canine housemate. When he arrived, she roused herself from her sorrow to mother him, even allowing him to lean his body against hers to help him learn how to make his way around his new home, around the streets of their neighborhood, and around the park where Lawson has gained so many friends. Sometimes he is joined by a border collie, also blind, whose visits to the park address his exercise and herding needs as he chases after tennis balls into which jingling balls have been inserted so that he can follow their movement.

Blind dogs’ need to socialize and run with the herd don’t surprise Michele Salob, DVM, MPH, a veterinary intern in shelter medicine and surgery at the University of Florida’s Veterinary Community Outreach Program and a volunteer for Blind Dog Rescue Alliance. “Whether missing a sense or missing a limb, a dog ultimately wants to be a dog and do ‘dog’ things,” she says. “They do the same things that other dogs can do, only sometimes in a modified way. They dig, they play, they bark, and most importantly, they love.

“It is not uncommon for people to think that dogs who are visually impaired have a poor quality of life,” Dr. Salob comments further. “The reality is that many dogs become visually impaired as they age and may be completely blind without any suspicion from their families. Since dogs do not need to drive or read, their visual acuity is not as important to them. A blind dog, whether the lack of sight is congenital or acquired, can have a normal quality of life, as long as his people take a few precautions to keep him safe.”

The precautions are simple and involve common sense, such as placing gates at stairways and keeping pets on leash in trafficked areas.

Other compromises that turn out to be small issues
The same is true for hearing-impaired dogs, Dr. Salob says. Yes, they require certain “safety precautions but can otherwise lead full lives. Hand signals are a great way to communicate with such dogs,” she says, and are actually helpful for everyone to know, as they transcend language barriers.

Of course, all dogs come with their own unique set of traits, just like we do, and “as our companions, we must realize that dogs are individuals and as their stewards, it is important to be aware of their unique needs,” says Dr. Salob. For instance, a timid blind dog in a home with rambunctious little children would be an unlikely fit with the combination of strewn toys and noise, whereas a “confident, hearing-impaired dog may be just fine in this same scenario.” Each special needs dog, just like any dog, must be matched with a new home carefully.

“Dogs who are both visually and hearing-impaired pose more of a challenge for inexperienced owners,” notes Dr. Salob, but even with them “there are several ways to learn to communicate,” for instance, “by using scent markers, touch commands, and/or vibrating collars.”

But it goes beyond deaf or blind. Says Rob Halpin, spokesperson for the Massachusetts Society for the Protection of Animals, dogs who find their ways to shelters “are all broken in their own way. Their family moved; their family gave up on them; they were rescued from the side of a road. Shelter animals such as Lawson are just ‘broken’ in another way, just one other variety of broken dog who is no less capable of showing tremendous gratitude for being rescued from their situation.

“In 2013, we had a dog come to us that was limping,” Mr. Halpin notes by way of example — “a black Lab, Callie Mae, with a terrible injury that we could never diagnose. But in essence, her front leg was lame and she would drag it, useless, and was constantly injuring it so that the vet team thought the best thing to do was remove the limb.

“There was something so special about Callie Mae, who was exceedingly social with no space- or food-guarding behavior, tail always wagging, and the first to greet everyone. She suffered no physical issues once her leg was removed.”

Mr. Halpin wasn’t surprised by her social grace. “Dogs don’t have the same psychosocial issues associated with the loss of a limb or of a sense that we would have,” he says, “because it’s so hard in our culture, potentially causing profound difficulties in our personal lives, our work. But the infrastructures that society has built are not concerns for pets, whose concerns are basically, ‘where’s the food, the bed, the toys.'”

It was when Callie Mae’s pain was behind her and her radiant personality front and center that Bob and Kathleen Easterbrooks came into the picture, looking for the perfect dog to love and also to take to work at the offices of their company, Atlantic Prosthetics & Orthotics, a custom brace and artificial limb provider. Given their line of work, the couple recognized Callie Mae’s beautiful temperament rather than focusing on her missing leg. They were long accustomed to working with individuals missing various body parts and never understood the “poor thing” reaction to their clients.

The match between Callie Mae and her new parents could not have been better. “We wanted a mature dog with trainability, and she was just wonderful so that even though we knew we’d only have her for a few years [she was eight at the time], we were so glad that we had adopted her,” says Mrs. Easterbrooks. “She was devoted to us and had a big heart, with a happy-go-lucky nature.”

Callie Mae was a terrific match for the couple’s clients, too, a reassuring presence that allowed them to focus on her friendly face, pet her, or even lean on her, when needed. She would often sit, leaning in toward patients in their wheelchairs, placing her head in such a way that they could pet her head or just know she was near.

Callie Mae is just one of the thousands of dogs and other potential pets abandoned to shelters every year, with so many overlooked because of issues ranging from blindness or deafness to a missing limb or old age.

But fortunately, the public view of such animals is changing. “It was not long ago when it was expected that a dog with a disability be put down, simply for having a ‘flaw,'” says Dr. Salob. “In fact, a veterinarian once asked me why I wasted my time trying to adopt out blind dogs, when there are so many ‘normal’ dogs that need homes. She went on to say that she could understand if someone had a dog that went blind, but why would someone want to adopt a blind dog? Of course, it was also not that long ago that parents were told to institutionalize their children born with a handicap. It is a reflection on the changing status of animals in our society, demonstrating that they are not just objects, that they are individuals with inherent value and should be treated as such.”