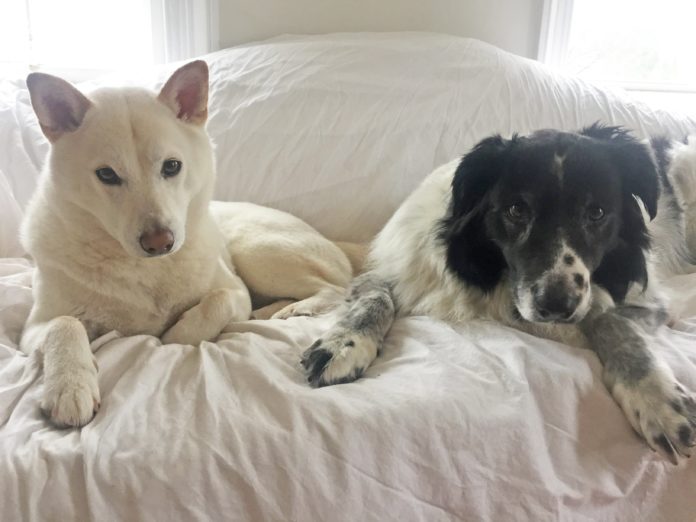 Raise your hand if your dog speaks to you in English.

Mine is raised even though I’m still typing. Big mutt Franklin’s voice (thanks to my amazing ventriloquism skills) is very high-pitched and kind of screechy. I was trying to figure out how to describe it to you last night when Edith Bunker from All in the Family came to mind. Frank’s voice is like hers — friendly but piercing. He’ll think nothing of screaming out to me from another floor of the house: “Daaaad, where are you?” Or, with one eye on little shiba inu Rosie he’ll reassure himself by asking, “Dad, you love me more than huh, right?” (He says “huh” for “her” — thick New York accent, that one, even though he originally hailed from Tennessee.)

Rosie’s voice is altogether different. When she first came here, traumatized by having been shunted from foster home to foster home, all she could utter was “Prrrrp” on a relatively high note. But as she calmed down and matured, her voice became robotic and sort of monotone. (Think Lilith from Cheers, I guess.) And she’s quite formal. Six years in, she still refuses to call me Dad. “Hello, Mr. Linden,” she’ll intone when I come in from outside, or from another room, never getting our last name quite right even though I have corrected her over and over.

Why is it that we make sure our dogs can speak? One psychologist has posited that the lonelier people are, the more likely they are to anthropomorphize things, including their pets, and imbue them with personalities.

Baloney. How could I be lonely with Frankie and Rosie in the house? I’ve got plenty of company. There’s even a couple of other people here. Let’s see. Oh yeah, my wife and son. Lots going on, even though I’m not sure those two talk to me as much as the dogs do.

Just as important, I don’t imbue the dogs with personalities one bit. Their personalities are writ large all over their actions, bearing, and overall approach to life. All I do is help them express themselves.

I’m happy to report that neither one of them uses salty language or is ever even argumentative. True, I don’t like when they run up a huge phone bill, especially when they don’t give me advance notice. But in the scheme of being able to communicate with them in the same language, it’s a small price to pay.