We all are familiar with the old saw that every year a dog lives is the equivalent of seven years of a person’s life. But new research indicates it’s not that simple, and that a dog’s rate of aging changes over his lifespan.

The biggest surprise is that a one-year-old dog is equivalent in age not to a 7-year-old child but to a 30-year-old adult. The investigators, reporting in the journal Cell Systems, made the finding when they examined the DNA of 104 dogs ages 1 month to 16 years and compared it to the DNA of more than 300 people ranging in age from 1 to 103 years.

DNA itself doesn’t change over time. But certain molecules called methyl groups accumulate in various areas of a mammal’s genome. And where and when they accumulate and to what degree influences the action of genes that control the rate of aging. It turns out that dogs accumulate methyl groups in their genome at a much higher rate than people in the first year of life.

The new numbers make more intuitive sense than the old “one year equals seven” model. Dogs can become pregnant at about 9 months of age. And a 7-week-old dog is comparable to a 9-month-old child, according to the findings. For each species, that’s the age at which “baby” teeth erupt, note the researchers, who hail from the University of California, San Diego.

After the first year, aging slows down considerably in dogs. A 4-year-old dog is on par with a 54-year-old human, and a 14-year old dog is at the equivalent age of a person in their mid-70s (not their late 90s, as 7 x 14 would suggest).

Age equivalencies are not always an easy translation

Dogs have traditionally been considered “juveniles” or “teenagers,” from age 1 to 2, so you might ask if that notion goes out the window with the new information that a 1-year-old dog is really 30 in human years. Not exactly. The body’s manipulation of DNA is not the only determinant of age. Hormones count, too, and some dogs are not even fully grown by the time they reach their first birthdays, so the adolescent-like antics of a dog who is between the ages of 1 and 2 are still logical. In certain ways a dog older than 1 but younger than 2 is still in the throes of puberty, even though in other ways he has reached adulthood.

It should be noted that most of the dogs in the research were Labrador retrievers. Dogs of other breeds (and sizes) may age at somewhat different rates. 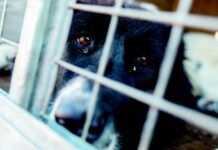