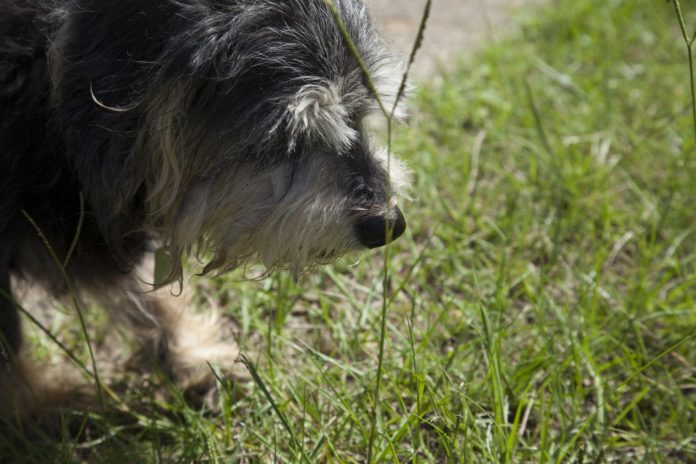 We know. Summer’s approaching, and with it that feeling of freedom, so you like to roll down the window and blast the car radio, belting out your favorite songs as you cruise along the highway. But you know what? If your dog is with you, it could really hurt her ears. Dogs hear a good four times better than we do, and they have a hard time with very loud noises. So Jimmy Page’s guitar riff and Robert Plant’s louder and louder singing of the lyrics in Led Zeppelin’s Stairway to Heaven, while a terrific release for you, are a jangly, scratchy cacophony of ear-splitting sounds to your pet. Imagine having to listen to a high-volume recording of a fork scratching the bottom of a pot and not being able to change the station.

They put up with so much to accommodate themselves to our world. Yet in so many ways we don’t have even the dimmest of perceptions of the world in which they live. Here, with their senses in mind, are a few easy ways to make living with us more bearable.

1. Turn down the volume. It’s not just car music. It’s the television, too. Try lying on the floor while the TV is on. Sometimes it sounds even louder from down there. We get it that full-bodied volume can enhance the experience. But isn’t giving up a little of the sensorial experience worth it for your dog’s comfort?

By the way, dogs don’t like loud arguing, either. See what your dog does the next time you have harsh words with someone in your household. Many run for cover — and some even try to break it up. It’s not just the volume; it’s the tone. Dogs are the ultimate diplomats; they like things calm and friendly. Except when they’re playing — then they like things frenetic and friendly.

2. Choose blue and yellow toys. If it’s all the same to you, pick out yellow and blue Frisbees and balls over red and green ones. Remember, dogs are color blind. It doesn’t mean they can’t see color, but they don’t see as much of the spectrum as we do, and they don’t see it as vividly. It’s because over the millennia, they were selected to be able to pick out a brown rodent in the grey dusk, not become interior decorators. What it comes down to is that for dogs, the world looks more like the first 20 minutes of The Wizard of Oz. A red Frisbee on green grass just won’t stand out that much. Blues and yellows pop for dogs, however. They’re on the part of the color spectrum that dogs perceive closer to the way we do.

Do note that dogs see better at night than people. When we look at an object in relative darkness, we may only see shadows cast by moonlight or a faraway streetlight. But dogs have a reflecting layer at the back of the eye that acts something like a mirror, so that whatever light goes in is reflected back out. That jingles sensor cells in the eye a second time and doubles the effect of whatever light is available. Why is this relevant? It should remind you to be patient if your dog starts barking or remains rooted in one spot on a nighttime walk. She may be transfixed by something that simply is not within your sights.

3. Allow time to sniff. Sometimes it seems like a dog on a leash can spend hours sniffing a single blade of grass. How many tugs of war ensue because your dog’s not done exploring with her nose and you need to get back to whatever you were doing? The thing is, while we see the world with our eyes, dogs see it with their nostrils; they have nearly 20 times more primary smell receptor cells in their noses than people do. Not only that, dogs can detect odors at concentrations at least 100 times less than a person can. In some instances, they can detect odors at concentrations a million times less. (A dog can detect a human scent on a glass slide that has been lightly fingerprinted and left outside for two weeks. You touch it, they know you’ve been there.)

Their sniffing ability gets better still. A dog can distinguish between scents much better than we can. On a trail scented with animal urine, garbage, plant, and tree odors, they can make out two to five human footprints — and determine what direction the person walked in three hours earlier.

So of course they need time outside to read the odors of their world. They’re not trying to annoy you or get the upper paw by lingering. They’re just trying to keep abreast of recent events. Yanking them away from sniffing a spot too soon is the equivalent of someone shutting a magazine on you just as you’re getting to the most salient part of an article. The take-away: build more time into your walks with your pet. Yes, you can do the loop in 15 minutes. But the dog needs 20, or 25. It’s not just about relieving herself. It’s the way she picks up news about her environment — which other dogs have recently been there, whether other animals have passed by, whether that nice old man who pets her has had his walk, and so on.

4. Don’t fault her inquisitive palate. You know how hard it can be getting little kids to try new foods? That’s because toddlers are naturally neophobic. They have a built-in reticence, or caution, about trying new things. Dogs, they’re naturally neophilic — they love to try new things, including new foods and often anything else that will fit in their mouths. They’re not being pigs; they’re being dogs.

And if they eat fast, it’s not because they don’t have good table manners. It’s because they only have about a quarter of the taste buds we do — roughly 2,000 compared to our 9,000. Why swirl the wine around in your mouth if that’s not going to help you taste it much better, anyway?

5. Pet gently, soothingly, especially on the muzzle. Sure, plenty of dogs like a brisk rubdown or hard comb-through with a brush. And they like their bellies rubbed, too. But don’t kid yourself. They’re physically sensitive creatures, especially on the face. It’s no surprise. While our sense of touch is most exquisitely acute at the tips of our fingers, on dogs it’s at the muzzle — that part of the face comprising the nose and mouth and the areas between and around them. The canine touch receptors are most numerous in that area.

If you want to show your dog quiet affection, stroke her ever so attentively on the side of the muzzle. Chances are she will really appreciate it.