Home DOG TRAINING AND BEHAVIOR Dear Doctor: To Use An Ultrasonic Training Aid, or Not?
Print
Email
Facebook
Twitter 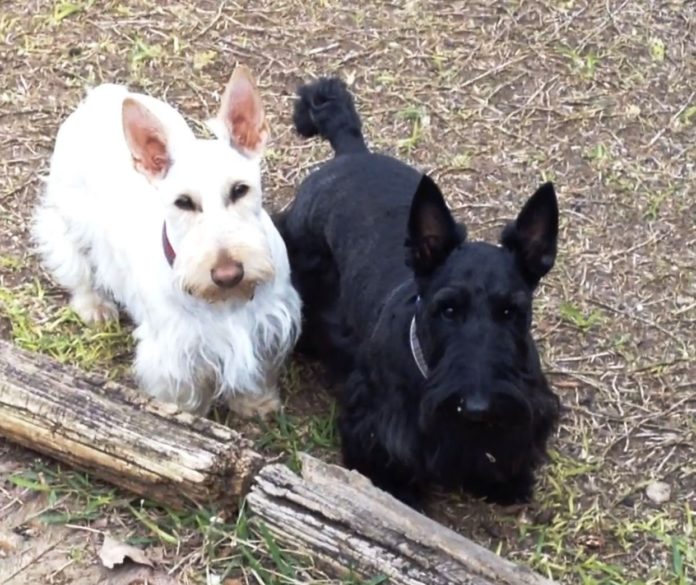 Q. I have two Scottish Terriers, 4 months apart in age and both under 1 years old. The male Scotty wants to chase cars that make loud noises, whether he is in the back yard or when we are walking. He also goes into a barking or snapping frenzy when approached by any dog on a leash. I have tried a training aid that emits ultrasound when he pulls on the leash or a button is pushed, but it does not faze him. Any suggestions, please?! I am hesitant to take them walking, which is a shame because they both love to walk.

A. Wouldn’t it be great if there were simple solutions to complicated problems, like a noise that could stop undesirable animal behavior? Alas, ultrasound, which we can’t hear but many animals can, doesn’t work to keep our four-legged friends from doing things we don’t want them to do — but not for a lack of trying. New Zealand-born animal behaviorist Emily Kane points out that ultrasound was used at one point to deter deer and wolves from eating crops and bothering livestock. But the deer and wolves couldn’t have cared less. Ultrasounds were also employed to get bats and pigeons out of rafters. The bats were a little confused at first but then learned to ignore them. The pigeons were never confused — they can’t hear in the ultrasound range.

Nor did ultrasound do any good when it was used to repel vermin and cockroaches. They heard it alright — and, like the bats, ignored it. Ditto for ultrasound’s effect on fleas. Ultrasound dog collars manufactured to keep fleas away proved useless.

So is it any surprise that your male Scottish terrier isn’t deterred from lunging on the leash to chase cars — or another dog on a leash — when you operate a gizmo that lets out some kind of ultrasound noise?

Think about it: dogs no doubt hear noises in the ultrasound range all the time even though those sounds are completely lost on us, so why would one more ultrasound in their lives deter them in the moment from a behavior that for whatever reason is very emotionally fraught for them? To put yourself in their paws, imagine if many people you came across did not leave you unnerved, but every time you saw someone wearing a belt (which occurs pretty much as often as a dog encounters another dog on a leash), you became very alarmed and agitated, to the point that you might even lash out to protect yourself. Do you think that if at those very moments of extreme fight-or-flight someone made a buzzer go off, it would stop the cascade of your emotional response toward the belt wearer coming toward you?

Well, that’s how it is for dogs. To our pet canines, an ultrasound is just a sound — nothing more. In fact, Amazon reviews of ultrasound devices refer to dogs who simply didn’t react, dogs who reacted but quickly learned to ignore the sound, and dogs who became frightened of the gizmos and the sounds they emitted, which, when you think about it, is heartbreaking. If your dog is socially maladjusted to the point that you need to do something about it, frightening him is a lousy (and cruel) way to do it. Says the head of our Animal Behavior Clinic, Stephanie Borns-Weil, DVM, “People are very good at inventing ways to punish dogs. It makes me sad sometimes.”

So how can you re-train your Scotty if slapping him on the wrist with a noise, so to speak, doesn’t work? “There’s no easy way,” Dr. Borns-Weil says. It’s a gradual process that takes time.

“I would recommend a harness or head halter and behavior modification,” the doctor comments. And reward the dog every time he does not lunge or try to chase a car, especially if he responds when you tell him to “leave it.” (You may have to help him to “leave it” at first by keeping the leash very short and turning him away from the car or the other dog, then, once he has calmed down, praising him and rewarding him, perhaps with a treat or some nice stroking.)

You can also work to desensitize your dog over time by taking him near a road with cars or on sidewalks where there are other dogs on leashes, yet keeping him at a safe enough distance from his “triggers” so that he doesn’t feel the need to react. Over multiple sessions, gradually move him closer and closer to the roadway or other leashed dogs. Every time he doesn’t overreact, reward him.