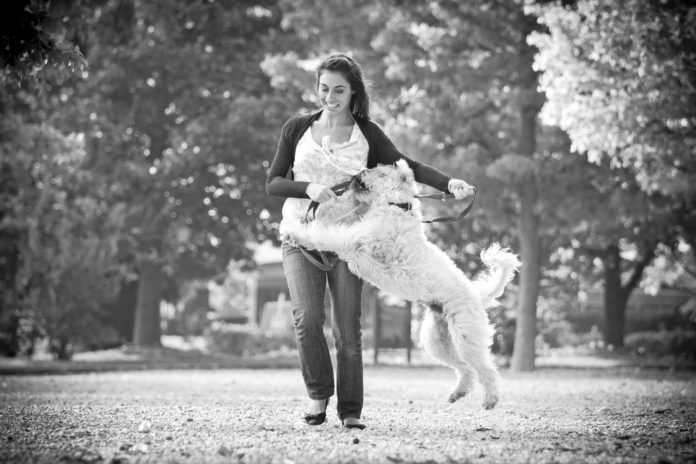 People often start out with the right strategy when trying to teach their dog not to jump on people, says our Behavior Clinic director, Nicholas Dodman, BVMS. They ignore the behavior. But what they fail to realize is that when you ignore a behavior that in the past has gotten a reaction, “the first thing that happens is that it gets worse.” So owners lose patience, assume they’ve taken the wrong tack, and resort to the counterproductive measures they have been using all along, like pushing the dog off, which only makes the animal think that’s part of the game — jump/push, jump/push.

It’s the same with a dog. If he’s used to eliciting a response from you or other people when he jumps, even if it’s a negative response, he’ll wear himself out trying for that response with jumping before finally calling it quits.

So along with the right strategy, you have to have patience. As put by Nobel Prize winner Konrad Lorenz, who studied the instinctive behavior of animals, “Art and science aren’t enough, patience is the basic stuff.”

How much patience? A lot, especially if you’ve gone the route in the past of sometimes responding to the behavior and sometimes ignoring it. An intermittent reward for a certain behavior will make a dog try much harder, Dr. Dodman points out, because he knows that there’s a chance of his actions getting you to pay attention if he keeps working at it. Even brain chemistry is set up to make dogs (and people) work harder for an intermittent reward rather than one that comes every time. The release of the brain chemical dopamine, involved in the signals of feel-good neurotransmitters, is doubled in instances in which a reward comes sometimes rather than always. That’s one of the reasons gambling has such a potent effect on some people. If they won every time rather than just once in a while, it wouldn’t feel as satisfying.

It could take a dog who has sometimes been ignored when jumping and sometimes gotten a reaction a good three weeks to finally knock off the behavior, requiring unwavering commitment on the part of the owner. It will worsen for about half a week, Dr. Dodman says, then improve the second half of the first week, then gradually get better and better over the subsequent two weeks.

Start each time the dog jumps by saying, “Off.” Say it once, and only once, no matter how much the dog keeps jumping. Repeat the word multiple times, and the dog has trained you to keep using a word with little to no potency. Note: Many people err by saying “Down” to a dog that is jumping on them, which the dog has already learned means “lie down on the floor.” It won’t make any sense to the pet.

Once you have given the word cue, you have to essentially turn to stone — every single time the dog jumps. Keep your arms folded, your hands turned to the side, and your eyes averted. When you’ve totally ignored the dog until he has stopped — which could take three minutes, perhaps even a bit longer — turn to him and say, “How you doing? Good boy!” The process will go somewhat faster if you’ve always responded to your dog’s jumping rather than responded here and there, because he won’t have learned that it works sometimes but not others, which will cause him to up the ante. He’ll get it much more quickly that it used to work but no longer does.

Either way, if you stick with it, employing patience while you repeat the turning-to-stone scenario over and over, you will soon (not in a day or two but within a few weeks) have a dog who doesn’t jump on you or others. Why would he? Dogs only do things that are rewarding. No reward (and again, even negative attention is a reward), and it’s not worth the bother.

A couple of tricks to help the process along

Some people may want to use what is known as a bridging stimulus to signal to a dog when he starts jumping that they will be immediately withdrawing attention. This might be a duck call or, say, a tuning fork or the commonly used clicker. As soon as a dog begins jumping, he is signaled with a sound that all attention will now cease. “It’s like an exclamation point that may help speed up the process,” Dr. Dodman says, a quick bridge to the utter lack of attention the dog will be receiving while jumping.

Counter-conditioning is yet another weapon in the arsenal against unwanted jumping. You literally counter the behavior with something that is inconsistent with it. For instance, if your dog jumps on people when they enter your home, condition him to sit for a treat as soon as anyone enters. A dog simply cannot jump on someone and sit for a longed-for reward at the same time.

When ignoring the behavior isn’t manageable

Ignoring the imploring jumping of a 20-pound poodle might be all fine and good, but what about if you’re a 110-pound woman with a 100-pound Bernese mountain dog? Turning to stone for three minutes several times a day over the course of three weeks just isn’t going to work. In such cases, Dr. Dodman says, you need to use a head halter such as a Gentle Leader, a harness that puts pressure around the muzzle and the nape of the neck, which is how a mother dog picks up and leads her pups and gets them to stop doing what she doesn’t want them to do.

When the dog jumps, apply gentle, sustained pressure to the lead with a soft tug, which gets transmitted to the nose and neck, activating pressure points in those spots that the dog will immediately understand as your having control over him. He’s genetically programmed that way.

Remember, hold the lead ever so lightly, applying just enough tension to deliver a biologically appropriate signal. The dog should not feel like he’s being punched in the throat, which is what he would feel like if you yanked a throat collar. In fact, you never want to use a choke chain — or knee a dog in the chest, or step on his back paws, hold his front ones (forcing him to stay on his hind legs), or spray him in the face with water. All of these negative tactics, espoused by some trainers, will erode all trust between you and your pet, with a couple of them downright inhumane. People sometimes resort to them when they become impatient with the slow and steady approach of real training (which has the added effect of encouraging a closer bond between dog and owner). But while punishment tactics may work to get a dog to stop jumping, they don’t work as well as ignoring bad behavior and then rewarding the dog with some encouragement when he stops. “It’s always far more effective to reward a behavior that you want than to punish a behavior that you don’t want,” Dr. Dodman says.

Will the Teething and Nipping Ever End?

How Your Personality Impacts Your Dog

What Won’t Work When Teaching “Come”