Home DOG TRAINING AND BEHAVIOR For Some Fearful Dogs, July Can Be the Cruelest Month
Print
Email
Facebook
Twitter

For you, July might represent barbecues, good times at the beach, and vacations. But for a good number of dogs, it signals the fearsome sounds of fireworks and powerful summer thunderstorms.

Yet “it is quite reasonable to expect that you can desensitize your dog to the booms and crackles of fireworks,” says Tufts Animal Behavior Clinic Director Nicholas Dodman, BVMS, DACVB.

There are presumably two components to the fear, he says: what the dog sees and what the dog hears. What the dog sees is easy to tend to. Don’t take her to any fireworks celebrations. That way, if she might get thrown by huge starbursts appearing in the sky, she won’t have to contend with them. It’s difficult to actually desensitize her to the sight of fireworks because it’s not something one can simulate on a gradually increasing basis. How could you set up a small round of small fireworks and then build up to those seen at a July 4th celebration?

As for what the dog hears, Dr. Dodman recommends buying a tape with sounds of something exploding and gradually playing it louder and louder, over a period of days to weeks, while engaging the dog in some play or training activity that she enjoys. That teaches her that when fireworks go off, it’s time for her to have fun. You can couple a food treat with the increasingly louder sounds, too, so she becomes conditioned to understand that the loud noises come with tasty snacks. “You could get a tape of cars backfiring, gun shots, or even fireworks themselves,” Dr. Dodman says. “Just Google ‘desensitization sounds dog’ and different options will come up.”

Making a noise louder and louder is how police dogs are desensitized to the sound of gunshots, by the way. In some cases, a pistol is shot into a grouping of cardboard boxes nested one inside the other like a set of Russian matryoshka dolls. The trainer puts his hand and the gun right through to the bottom in order to muffle the sound and pulls the trigger, giving the dog a treat immediately after so that the animal associates the noise with a good outcome. When the dog is okay with the sound, he removes one box — one layer of noise-muffling cardboard — to make the sound a little louder. And so on.

Storm phobia is harder to help a dog get over — much harder — and why is not clear. But if you want to give storm desensitization a go with your dog, be sure to introduce her to the sounds of storms in the same gradual, structured way that you would reintroduce her to anything else she’s afraid of. That’s how you will instill confidence in the face of adversity.

In mild cases, take your dog to the basement during a storm to help muffle the noise. And draw any blinds or curtains while playing white noise in the background to help drown out the sights and sounds of the storm even more. Don’t sympathize or agonize over what your dog is going through, because that only lets her know that what she is going through is unbearable. Instead, distract your friend, perhaps by playing fetch or engaging in some other game or routine that she enjoys.

As the dog begins to focus on the fun, maybe during the second, third, or fourth storm, gradually increase exposure. Open the blinds a bit. Then, during storm five, leave the kitchen door open so she can peek upstairs if she wants. Etcetera.

If these strategies fail, try a recording of the sounds of a storm that you can turn on at will without actually waiting for a storm — and that you can turn down as softly as you like, increasing the volume incrementally over several sessions spaced several days apart.

If that doesn’t work, try an antistatic cape. Research at the Cummings School suggests that for some dogs, storm phobia is not about the noise but about the buildup of static electricity on the dog that causes shocks. (You’ll often find a dog in the bathroom pressed behind a pipe during a storm; pipes conduct electricity away.)

When Tufts behaviorist Nicole Cottam, MS, tested more than 50 dogs (all puppies) who had been fitted with an antistatic cape, more than half of them became perfectly calm within about three storms. The underside of the cape has a flexible metallic lining that prevents the dog from becoming statically charged. (Check out, for instance, Storm Defender capes at stormdefender.com.)

Is “Bad Dog!” Ever the Right Thing to Say? 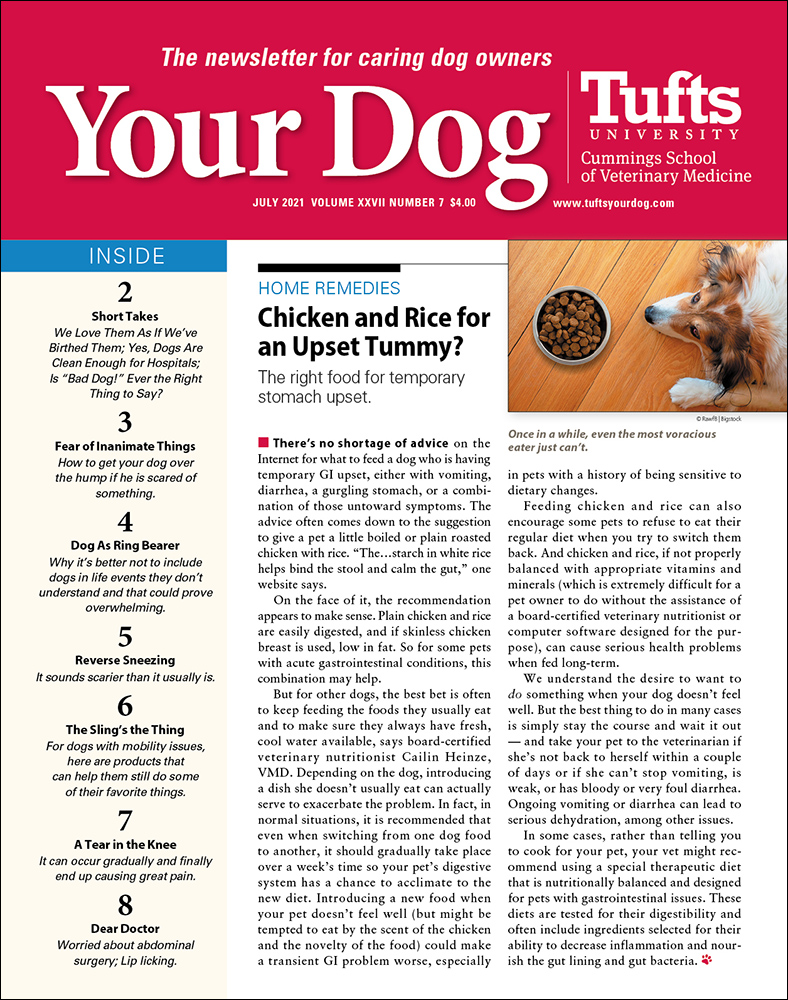